The lack of jobs is one of Namibia’s biggest social and economic problems. At the same time, a majority of residents are outside the formal economy. Most of them rely on self-catering agriculture.

The official unemployment rate is among the higher in Africa (see fact box), but the figure becomes even higher if you include unregistered unemployed and underemployed persons.

Of the official employees, most, especially women, work in the service sector. Quite a few have formal employment in the agricultural sector, but fishing employs many at sea and on land.

Many Namibians lack the necessary vocational training and lack of skilled labor is a major problem. The government has made major investments in basic schooling and continues to pursue educational reforms.

The income differences are also large. About two-thirds of the total income goes to the richest tenth of the population, which includes virtually the entire white elite. However, the number of black small businesses has increased, including in the service sector.

About one in five employees are affiliated with a trade union. Almost all miners are unionized, while very few farm workers are.

The main trade unions are called the National Union of Namibian Workers (NUNW), which is close to the Swapo government party (see Political system), and the Trade Union Congress of Namibia (TUCNA). Strikes are formally allowed, but it has nevertheless occurred that employees have been laid off due to labor market conflicts. Employees in some important community services, such as the police, lack the right to strike. 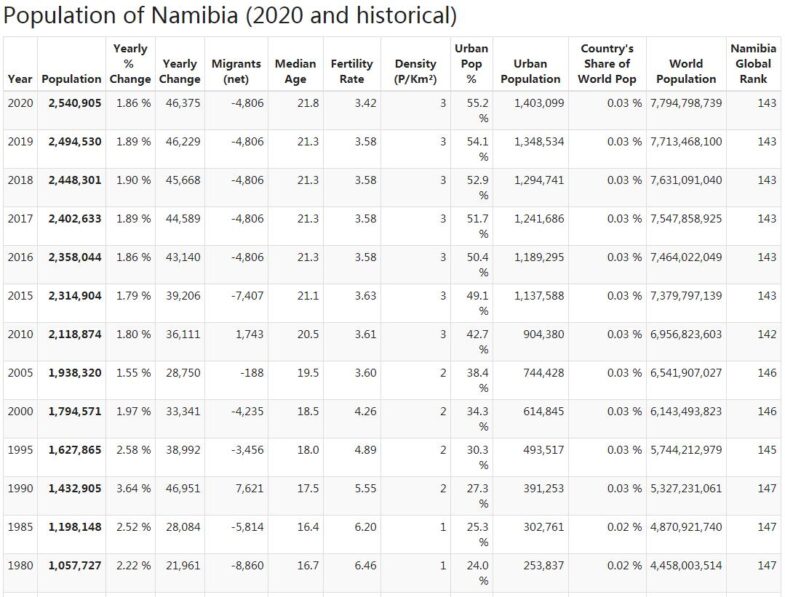 Discrimination in working life is prohibited by law since 2004. A law that came in 2006 introduced 45 hours of work week and 20 days of vacation.

Success in the fight against HIV

Health Minister Bernard Haufiku announces that there are good chances that Namibia will achieve the goals set by the UN in time to fight and treat HIV. In its report – “Knowledge is power” – the UN agency Unaids notes that Namibia has made great progress in enforcing testing for HIV and treating HIV-infected people. Unaids has set the target 90-90-90 by 2020, which means that 90 percent of all citizens should have tested, 90 percent should have access to treatment and 90 percent of those taking medicines should have succeeded in reducing the prevalence of HIV in the blood. to levels so low that it is not possible to detect the infection. In 2017, Namibia had the numbers 90-84-74 compared to 75-59-47 globally. This table shows how HIV has developed in Namibia in recent years.

Redistribution of soil should be accelerated

At a national land affairs conference, President Geingob announces that the state will begin expropriating land from landowners who do not live in the country. After independence in 1990, the government tried to redistribute land ownership through voluntary sales by the landowners but it went slow and in 2003 the law was amended to allow the state to expropriate land. Believe it has hardly any land forced by the state. President Geingob now promises change on that point. The distribution of land is a major issue in Namibia where close to one million of the country’s more than 2.5 million inhabitants live on land that does not belong to them. 70 percent of agricultural land belongs to white farmers, according to a report presented at the conference. Of the more than 250 farms owned by foreigners, half belong to Germans.

Namibia does not get the stamp as a tax haven

The EU removes Namibia from the black list of tax havens established by the organization in 2017. Instead, Namibia ends up on the so-called gray list of countries that have said they are willing to adapt their tax laws to EU standards.

Leftovers are handed over from Germany

An official from the German Foreign Ministry is handing over the remains of 27 people killed by the Germans during the colonial era when massacring tens of thousands of people from the Herero and Nama people. The official from the ministry asks “from the bottom of his heart” for forgiveness for what happened. However, at the ceremony in the capital Windhoek, the leader of the herero people, Vekuii Rukoro, reiterates the demand for an official apology from the German government. In 2015, Germany acknowledged the herero and nama massacres as a genocide, but the German government has never delivered any formal apology, the AFP news agency writes.

Namibia and four other countries join the African Union Free Trade Agreement AFCFTA at the summit of the organization in Mauritania’s capital Nouakchott. Before the free trade area can become a reality, the agreement must be ratified at the national level.

President Geingob dismisses the two ministers who challenged him as leader of the Swapo government party at the party’s congress in November 2017. Home Minister Pendukeni Iivula-Ithana and Minister of Youth, Jerry Ekandjo, lose their positions in the government immediately after they became a member of Nambia state 1990. Ekandjo, who was a candidate for the party leader post with Iivula-Ithana as the horse of horses, annoyed Geingob at the party congress by calling the sitting party leadership “weak.”

Politicians get a ban on flying

President Geingob faces a month-long ban on politicians and officials traveling abroad. The reason is that the state is trying to cope with a growing budget deficit. The president states that he himself has refrained from using the government’s aircraft during his recent trips. In the past, the government has made savings in education, health care and defense. The Namibian newspaper reports that thousands of soldiers will be forced to leave so that the state can save on food and electricity outlays at military bases.