Only about a tenth of the country’s employable residents have a formal employment. The rest of the working people provide for themselves in the informal sector, many of whom are engaged in self-catering agriculture.

The officially registered unemployment rate is high even by African measures, and in reality the figure is even higher. Particularly high is the unemployment rate among young people in the cities. Less than a quarter of city dwellers aged 15-24 have a job.

Unemployment and underemployment would have been an even more difficult problem if there was no possibility of working legally or illegally in South Africa. It is impossible to know exactly how many Mozambicans work in neighboring countries, but it is estimated that it is one million people. South Africa seeks to curb illegal labor migration and exports thousands of Mozambicans each year without a work permit.

All employees with formal employment are entitled to join a trade union. The unions are weak. Many professions are exempt from the strike law.

The minimum wage is low and not enough to support a family. 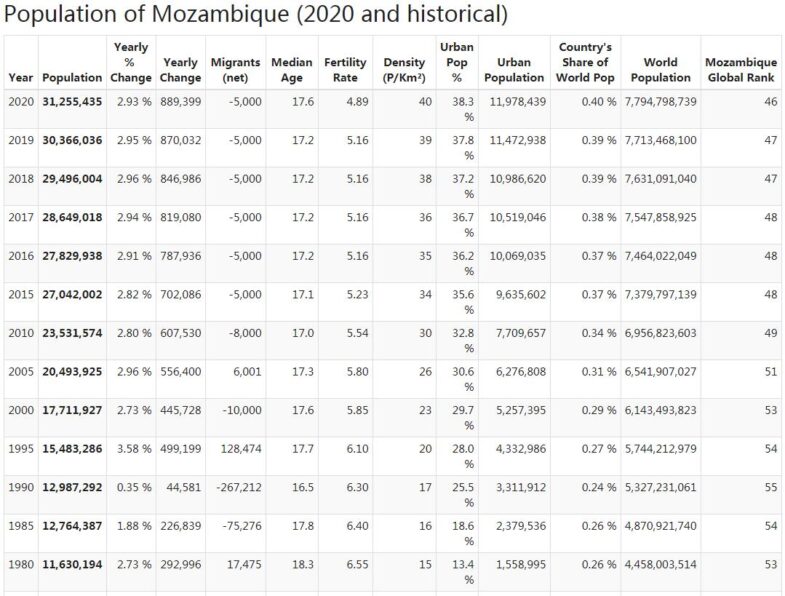 The need for skilled labor is great, something that the education system has not yet been able to meet. As a way of solving the problem, the government has demanded that multinational companies that establish themselves in the country must provide targeted education for the new jobs created.

Ex-minister seized in the loan scandal

Manuel Chang, who was finance minister when the government secretly took billions of loans abroad (see April 2016) through three state-sponsored companies in South Africa. The United States has requested Chang to be extradited. An American accounting firm has reviewed the loan scandal, and prosecutors in the United States claim that Chang received $ 12 million to carry out the loan settlement.

Peace talks are put on ice

The opposition party Renamo announces that the party in protest of the result in the local elections earlier in the month temporarily withdraw from the peace talks with the government. Renamo believes that the government side, through cheating, deprived the party of victory in five municipalities.

The government party goes back in municipal elections

The Frelimo ruling party wins the local elections by just under 52 percent of the vote, but it is significantly less than the party got in the last parliamentary election (75 percent) and Frelimo now loses power in five municipalities. According to the Election Commission, Frelimo becomes the largest party in 44 of the country’s 53 municipalities, while the opposition party Renamo wins in 8. Renamo, who participates in a local election for the first time in ten years, claims that Frelimo cheated and that Renamo should have actually won in another five municipalities. Renamo appeals the result to the Constitutional Council, the country’s highest constitutional and electoral body, but sees no success. The council determines the result after re-election in some party districts.

The UN criticizes violence against reporters

In a letter quoted by the media, the UN Commission on Human Rights criticizes Mozambique for failing to investigate a number of attacks on human rights activists and reporters since 2015. The Commission points to ten cases where people have been harassed, physically attacked and even killed. Among other things is the case of a journalist who was kidnapped in March and badly beaten after he criticized President Nyusi’s son on TV. The son was accused, among other things, of participating in illegal car races on ordinary roads at night.

One step forward in peace talks

President Filipe Nyusi and Ossufo Momade, leader of the Renamo opposition party, announce that they have agreed on how Renamo’s armed forces should be integrated into the police and the army. The issue has long been a stumbling block in the ongoing peace talks between Renamo and the government. Renamo conducted guerrilla operations until 1992 when a peace agreement was signed. Subsequently, Renamo was converted to a party but retained some men under arms. From 2013 and a few years ahead, new clashes took place between Renamo and government forces.

Parliament votes on the amendments to the constitution agreed by President Nyusi and the opposition party Renamo in February. The changes mean that the governors of the country’s provinces will henceforth be appointed by the party that wins the regional elections. Previously, all the governors were appointed by the president. Renamo has long demanded a decentralization of power. With the change, the party now gets the chance to appoint governors after the next election to be held in the fall of 2019.

Opposition party Renamo’s leader Afonso Dhlakama dies in a heart attack. Dhlakama was the leader of Renamo for nearly 40 years. For the past few years, Dhlakama had been involved in peace talks with the government after new clashes took place between government forces and Renamo 2013-2016. (Renamo signed a peace agreement with the government in 1992 but has retained an armed force.) Last February, Dhlakama and President Nyusi agreed on how Renamo’s demand for more influence at local level could be resolved. When the death comes to light, President Nyusi Dhlakama salutes in a speech saying that the peace process must continue. Ossufo Momade is appointed as temporary leader of Renamo.

Elections are scheduled for autumn 2019

President Filipe Nyusi announces that elections to the presidential post, parliament and regional assemblies will be held on October 15, 2015.

Mozambique is one of 44 countries to sign a Free Trade Agreement at the African Union Summit in Rwanda. The agreement must be ratified at the national level before the AFCFTA free trade area can become a reality, but it is seen as a historically important step towards increased trade exchange within Africa.

Decentralization of power on a proposal

President Filipe Nyusi announces that he intends to make constitutional changes regarding regional elections and appointments of governors. According to Nyusi’s proposal, governors will henceforth be appointed by the party or coalition that wins the elections in each region. Currently, the governor is appointed by the country’s president. Nyusi states that the amendments are a result of discussions with the opposition movement Renamo. The proposals should now be submitted to Parliament.