Most Moroccans are employed in the agricultural and fisheries industries. Unemployment is a problem especially in the big cities and also a source of political concern. There are several unions, some of them affiliated with political parties, but the right to organize is not always respected.

The government has started several development programs to reduce high unemployment, but after a clear decline in the early 1990s, it has landed around 9-10 percent. Among young people it is twice as high. Among urban residents and highly educated people, too, lack more than average work.

Work in the black sector or abroad therefore appears to be the only means of supply for many young Moroccans. Most people who work in other countries are located in Spain, France or Italy and money they send home is important for both their relatives and the economy. In 2017, the American think tank Pew estimated the value of the transfers to be over seven billion dollars the previous year.

Industry and service industries have become increasingly important to the economy, but agriculture and fisheries are still important for employment. There are four tenths of the labor force, about as many as in the service sector. About 20 percent of the workforce is in the industry.

Uncertain employment conditions and inadequate protection against workplace accidents characterize working life, but improvements are also made. In 2018, a minimum age of 18 years was introduced and unemployment rules for those employed for housework, which can, above all, give young women better conditions. In the mining industry there has been a closure wave, and race in abandoned mining holes causes recurring tragedies (see Calendar). 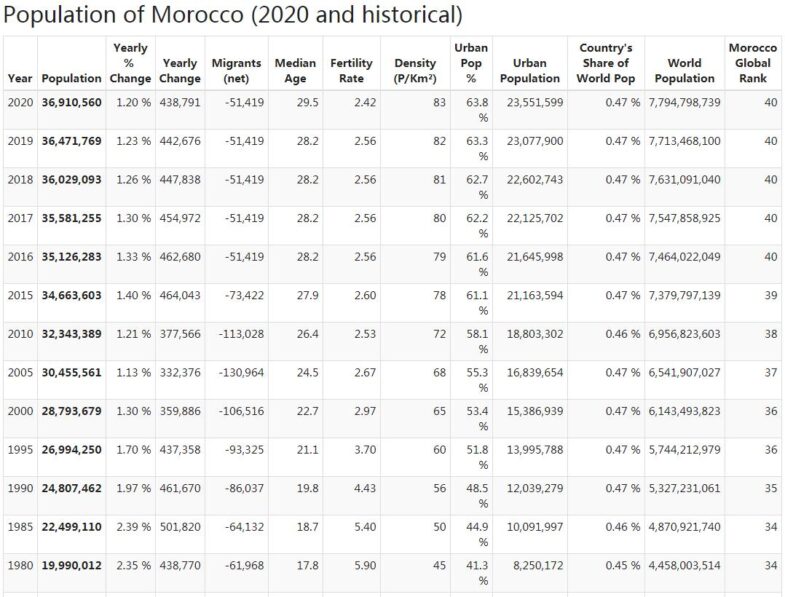 Wages are very low compared to Europe, despite the fact that the statutory minimum wages have been raised on several occasions in recent years. However, minimum wages and labor market laws are not respected by all employers.

The law does not give the general right to strike, but such do exist. In Morocco, there are three trade union organizations, two of which are linked to political parties. The oldest is the Union Marocaine du Travail (UMT) which has no ties to any political party. The largest is the Union Générale des Travailleurs du Maroc (UGTM), which is affiliated with the conservative party Istiqlal while the smallest, the Confédération Démocratique du Travail (CDT), has ties to the socialist USFP (see Political system).

Amnesty International calls on Moroccan authorities to release at least 410 people arrested since May in connection with the protests in Rif. The Human Rights Organization states that there are both children and several journalists among those arrested. They are charged with acts that should be subject to the right to freedom of speech and assembly, according to Amnesty.

Fifteen women die when chaos arises in connection with food being distributed to poor residents in a village near the tourist resort of Essaouira on the Atlantic coast. The accident raises debate about the major social and regional gaps in the country. An official report has recently been published with strong criticism of the deep poverty that prevails mainly in the countryside.

Rif activists are sentenced to prison

One court sentenced two participants in the protests in Rif to 20 years in prison, while four others receive between one and five years in prison. The verdicts refer to an assassination fire in March, when a building outside the Imzour near Al Hoceïma was burnt down. Dozens of police were in the house, but no one was injured. One person has previously been convicted of the fire, also to 20 years in prison.

Three ministers are allowed to go

King Mohammed kicks three ministers because of “delays in development programs” in Rif in the north. According to a new report, a venture made in 2015 with $ 700 million to breathe new life into Al Hoceïma has been unjustifiably delayed and many potential projects have never been launched. As a result, the education, health and housing ministers are now allowed to go, as are two other high-ranking officials. The announcement that the ministers have been kicked comes the same day that protest leader Nasser Zefzafi appears in court for the first time (see May 2017).

The UN is making a new attempt to reach a settlement on the future of Western Sahara. Horst Köhler, a new envoy for the UN Secretary-General, visits Morocco, where phosphate-rich Western Sahara is seen as an integral part of the country. In 2007, the government of Rabat offered Western Sahara autonomy. The guerrilla movement Polisario demands independence and wants to conduct a referendum. Köhler then proceeds to Tindouf in Algeria, where he meets representatives of Polisario.

A group that is suspected of having planned attacks on what is described as sensitive targets has burst. Seizures of explosives, among other things, have been seized and a total of eleven persons have been apprehended when struck in several cities, including Fès and Meknes.

An appellate court in Tangier rejects a lower court ruling from January, when a man was first legally determined to be the father of a child born out of wedlock. DNA tests confirm paternity. According to the review, the mother must pay the court costs and the father does not have to pay maintenance, but also the new judgment is appealed, to the country’s highest court.

High-speed trains are being tested in the north

Tests by express train are in progress before the inauguration of a line for high-speed traffic scheduled for summer 2018. The line will extend along the Atlantic coast between Tangier in the north and Casablanca further south via the capital Rabat. The project is financed in half with aid loans from France and is referred to as its French model TGV.

New leader in the oldest party

During a protest march in Al Hoceïma, which is carried out in spite of government bans, police and protesters again meet. The protests largely apply to the release of the more than 150 who have been arrested during the recent unrest, including leader Nasser Zefzafi, who was arrested in May. The journalist organization Reporters Without Borders (RUG) accuses Moroccan authorities of preventing reporting on the Rif region unrest that has now been going on for nine months. According to RUG, freedom of the press is becoming increasingly restricted.

A court in Salé sentences prison sentences for 23 Western Saharans for unrest in El Aaiún in 2010, when eleven Moroccan police officers were killed. Nineteen of the defendants receive between 20 years and life in prison, while four receive shorter sentences and are already considered to have served them. In 2013, a military court sentenced all to between 20 and life in prison, but the Supreme Court ordered a hearing in civil court earlier in July. Morocco and Polisario accuse each other of being behind the outbreak of violence in the camp (see November 2010). International human rights groups have sentenced the previous trial.

The newly elected French President Emmanuel Macron comes on a 24-hour visit to discuss, among other things, the fight against terrorism as well as the situation in Libya and Qatar’s bloated conflict with its neighboring countries on the Arabian Peninsula. Macron notes that both he and King Mohammed are committed to trying to mediate in the crisis that occurred on June 5 when Saudi Arabia and several of its allies severed diplomatic relations with Qatar.

A court sentenced 25 people to 18 months in prison for participating in the ongoing protests in northern Morocco, while seven people receive conditional sentences and fines.

Protests in the Rif region continue and erode as protesters throw stones at police using tear gas. Rif dominated by Berber was the center of the protests against the government during the Arab Spring of 2011.

A wanted leader of the al-Hirak al-Shaabi protest movement in the Rif region in the north is arrested. Nasser Zefzafi is reportedly suspected of having “undermined the security of the state” and has been chased for three days since he reportedly interrupted a sermon at a mosque and called for new demonstrations. The whole weekend has been ongoing protests in Casablanca, as well as in cities in the north, where the unrest sparked by a fiskhandlares death has continued (see O CTOBER 2016).

The king formally appoints the new government under the leadership of Othamani. As a result, the six-year political stalemate is over. The government is dominated by royalty and represents a setback for the PJD, which has been forced to give up the Foreign, Home Affairs and Defense Ministry post, as well as the Minister of Islamic Affairs.

Saad Eddine El Othmani announces that he has a six-party coalition ready. In addition to PJD, RNI, MP, UC, PPS and UFSP are included.

New Prime Minister to be appointed

After five months have elapsed after the election without the formation of a new government, the king announces that a new prime minister should be appointed. Another member of the PJD will now be commissioned to form a government as soon as possible, it says in a statement. Benikrane says he will soon leave the party leader’s assignment.

MP Abdellatif Merdas is shot dead near his home in Casablanca. Merdas was a member of the Liberal Party UC. A man is later sentenced to death and Merda’s widow to life imprisonment for the murder which has had to do with “sex, money and revenge”. Two more people are sentenced to long prison terms for involvement in the murder.

UN Western Saharan envoy Christopher Ross is said to have submitted his resignation application to the new Secretary-General António Guterres. During his eight years as an envoy, Ross has tried to get the parties to resume negotiations – without success. Morocco has criticized him for being partial to Polisario’s advantage. Polisario accuses Morocco of causing Ross’s departure by blocking negotiations since 2012.

Moroccan troops are withdrawn from the UN buffer zone Guerguerat at the border with Mauritania. This is expected to dampen the tense situation that occurred in August. However, Polisario dismisses the message of retreat as a political play

The African Union is voting to re-join Morocco, after 33 years of absence. The opposition is still great among some AU countries because of the Western Sahara issue and the debate before the vote is dragging on. In the end, 39 of the AU’s 54 countries support the membership.

Parliament elects Habib el-Malki as new president, three months after the election. Malki is the sole candidate and is elected with 198 votes out of the 395 possible.

Talks about government formation break down

Morocco ends up in a political stalemate when Prime Minister Benikrane gives up attempts to form a new government and interrupts talks with RNI and MP. According to analysts, the talks have increasingly come to be a power struggle power struggle between the Islamists in the PJD and royalist forces.

Some 50 Moroccan and five Spanish border guards are injured when around 1,100 African migrants try to storm the fence and make their way into the Spanish enclave. Only two manage to get over the six meter high fence but they are injured and taken to hospital. In December, over 400 migrants managed to get into Ceuta.