In Montenegro, the large state companies dominated throughout the 1990s, but with their deteriorating economy, their maturity increased. The companies had far too many employees and had major problems with paying wages on time. Many were simply forced to close down the business, but some also left employees without pay, as employment is a requirement to gain access to various social rights.

According to official figures, unemployment had dropped from around 33 percent in 2000 to around 13 per cent in 2007, for 2016 to again be up to just over 17 per cent. The downturn reflects the large investment in tourism, the rise in recent years the economic crisis. However, for some vulnerable groups, such as the Roma and refugees, the unemployment figures were vastly higher than the average. The gray / black sector is still significant.

According to official figures, the average monthly income at the beginning of 2017 was EUR 767 (before tax) and EUR 511 (after taxes and other deductions), a slight increase from the previous year.

When the union Serbia and Montenegro disbanded in 2006, trade unions were also divided. Today, there are two competing trade unions: first, CTUM (Montenegro’s Confederation of Trade Unions), a reformed continuation of the former Communist trade union movement, which mainly represents industrial workers; and UFTUM (Montenegro’s Union for Independent Trade Unions), which broke out of CTUM in 2008 after accusing it of using undemocratic methods and mainly retrieving members from health care, school and service. 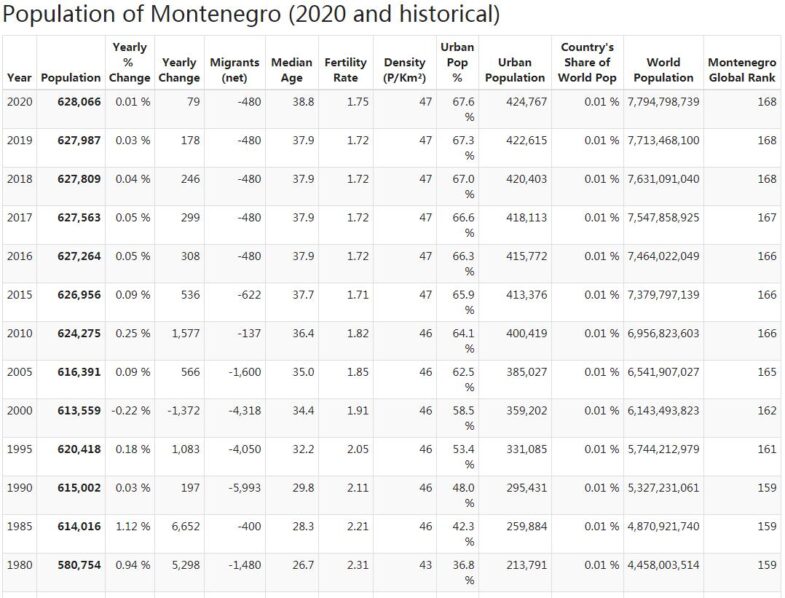 A law on gender equality came into force in 2007, but for example, there is no explicit provision on equal pay for equal work and women also have lower wages than men. Almost as many women as men gain employment. In 2016, almost 17 percent of MEPs were women. A law was passed in 2011 that will gradually raise the retirement age from 65 years for men and 63 years for women to 67 years for both; By 2024 it should be fully implemented for the men and 2041 for the women. However, many retire early, which increases the burden on the system.

An agreement between Montenegro, Macedonia and Albania abolishes border control between countries for the citizens of each country.

After lengthy and difficult negotiations between Prime Minister Lukšić and the opposition, Parliament can finally adopt a new electoral law, as requested by the EU. As a thank you, the opposition receives government support for a law that equates the Serbian language with Montenegrin in the school system. (The law is later rejected by the Constitutional Court, see July 2013.)