In the past, most Mongols lived in rural areas where their main occupation was livestock care. Today, two-thirds of residents live in cities and work with others.

Almost half of the workforce is employed in the service sector, and just over 17 percent in the industry (manufacturing, mining and construction). The share of the labor force working with agriculture and livestock management has fallen from around 40 percent in 2007 to 28 percent in 2014.

The official unemployment statistics include only registered unemployed and was 8.2 percent in 2012. Work in certain sectors, such as the construction industry, the mining industry and agriculture, is very seasonal and the number of unemployed therefore varies greatly during the year. Rural residents are largely outside the modern monetary economy and rely on self-sufficiency and barter. 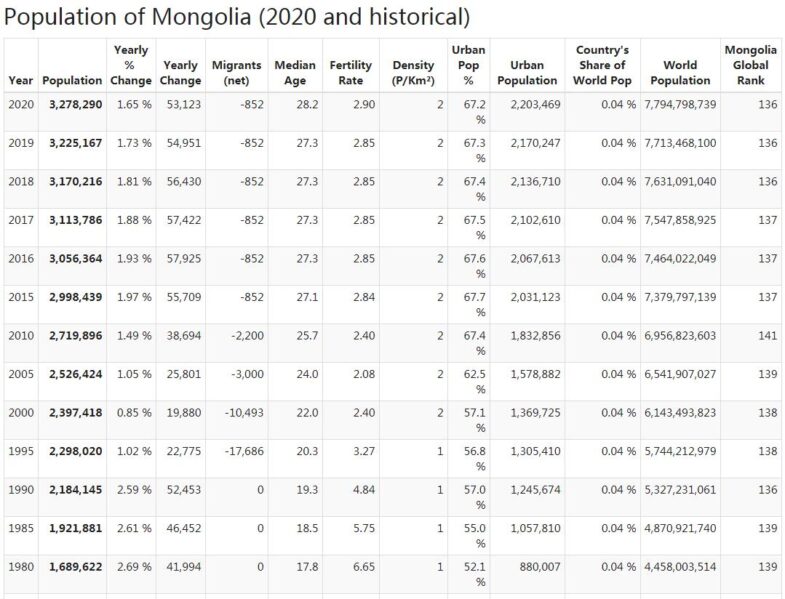 The dominant trade union organization Mongolyn Üjldvertjnij Evlelüüdijn Cholboo (Confederation of Mongolian Trade Unions, CMTU), until 1990, was the only allowable trade union. Since then, several other trade unions have been created.

Landslide victory for the ruling party in the election

The ruling Mongolian People’s Party (MPP) wins the parliamentary elections by a clear majority of votes. An important reason is believed to be that the country has been spared from greater spread of the new corona virus, which is seen as the government’s merit. MPP gets 62 seats in parliament while main opposition Democratic Party gets 11 seats.

Cities are quarantined to stop coronavirus

A Frenchman located in the country is reported to have been infected by the coronavirus. The government announces that cities in the country, including the capital Ulan Bator, will be closed for entry and exit. The reason is that the authorities want to stop the spread of infection. The country has previously closed the border with China, where an epidemic broke out in early 2020.