According to official statistics, unemployment in Moldova is relatively moderate, but behind the figures is the fact that a large part of the Moldovans work black or have moved abroad to get jobs.

The calculations also do not take into account those who live on short-term jobs or the many part-time workers. The proportion of unemployed is greater among young people and in rural areas.

Almost two-thirds of employed persons are employed in the private or public service sector. The industry employs around a fifth and almost a third work in agriculture.

Working hours are regulated by law for a maximum of 40 hours per week. Forced and child labor is prohibited. A person must have turned 18 years of age in order to be employed. Still, it is common for children to work in agriculture; According to the UN Labor Organization ILO, two out of three 14-year-olds help with agriculture in the Moldavian countryside. The general wage situation is low.

All employees have the right to form and be members of trade unions. Freedom of assembly and association is guaranteed by law. The right to strike applies, with the exception of government employees as well as certain groups within central operations, such as health care. 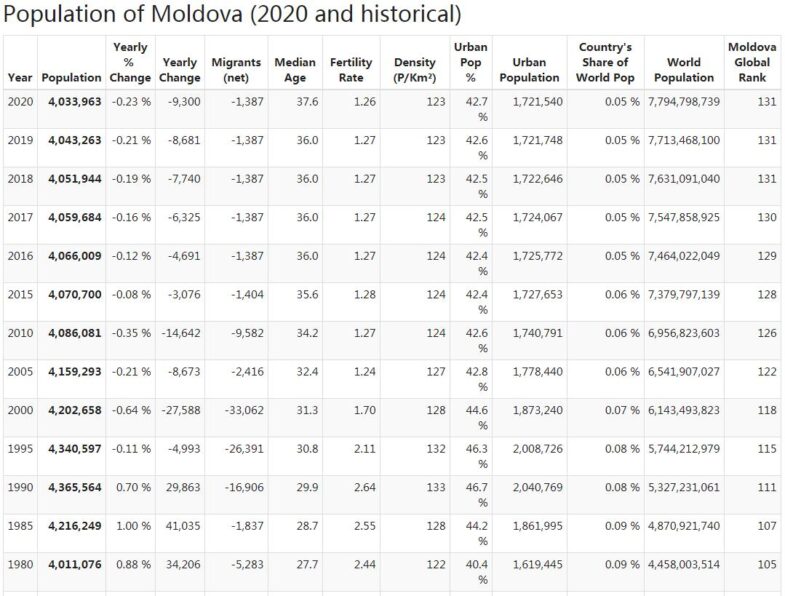 The trade union organization CNSM (Confederația Națională a Sindicatelor din Moldova; in English NTUCM, National Trade Union Confederation of Moldova) completely dominates. CNSM is a merger of the reformed old Soviet trade union organization CSRM and the newer trade union Solidariate. CSRM has long been an opponent of privatization and other reform policies. In 2015, CNSM had about 400,000 members and consisted of 27 unions.

The three EU-friendly government parties retain power, albeit with a rather scarce majority. However, the single largest party will be the highly pro-Russian Socialist Party with just over 20 percent of the vote. The socialists have made the choice for Moldova to break with the EU and join the Russian-led Euro-Asian Union. The Liberal Democrats, Liberals and the Democratic Party get just under 46 percent of the vote, against just under 38 percent for the Socialists and Communists together. That result gives the Western-oriented parties 55 seats in Parliament and the Russian-oriented 46 seats. The OSCE observerssays that the election was well organized but criticizes the decision to exclude Patria so shortly before Election Day. The Russian Ministry of Foreign Affairs criticizes the choice for “serious rule violations” and claims that 700,000 Moldovans living in Russia could not vote.

The Communist Party’s Central Committee decides later this month that the party can cooperate with the EU-friendly parties on issues related to Moldova’s “integrity, sovereignty and state status”. The three Western-friendly parties have 55 of Parliament’s 101 seats but need the support of at least 61 members to be able to get their candidate elected president in early 2016.

Russia-friendly party is suspended from elections

A few days before the parliamentary elections, the electoral commission excludes the newly formed pro-Russian party Patria (Fosterland) on the grounds that it has received financial support from a foreign country. The party is led by Renato Usatii, a Russian businessman of Moldavian burdens. The exclusion is determined by an appellate court. Prosecutors say they revealed plans to destabilize Moldova with Russian support after the election. Usatii leaves the country and travels to Russia. The Russian government says the exclusion raises “strong doubts” about the Moldovan election. Opinion polls had given Patria a chance of about ten percent of the vote, which could have contributed to a rolling victory for the pro-Russian and EU-hostile bloc dominated by the Communist Party and the Socialist Party.

Russian criticism of agreement with EU

Russian President Vladimir Putin criticizes the Moldovan government for refusing to consult with Russia before signing the Association Agreement with the EU. Putin threatens Moldova with deteriorating economic relations with Russia.

Relations with Russia are deteriorating

Moldova calls on Russia to withdraw its 1,500 soldiers and thousands of tons of weapons from the Transnistrian breakaway republic. The government points out that Russia should have promised to do this in connection with a summit in the OSCE in 1999. The day before, Russia has accused Moldova and Ukraine of trying to block the country’s contacts with the soldiers in Transnistria.

The Transnistrian breakaway republic sign seven agreements with Russia on economic cooperation and trade, among other things, but so far the issue of possible Russian annexation of the area is not on the agenda. However, most exports of meat from Moldova to Russia are stopped.

Moldovan State Council for Radio and Television cancels broadcasting license for Russian TV channel Rossija 24. The channel is criticized for unilateral reporting on the conflict in Ukraine. Four domestic channels are also dotted because they did not allow all public opinion to be spoken.

Russia bans the import of fruit from Moldova due to alleged violations of supply agreements. In connection with Moldova’s approach to the EU, the country has previously been banned from selling wine and meat to Russia.

The US attracts with financial support

During a visit to Poland, US President Obama launches an initiative to assure his European allies of US military support in light of the crisis in Ukraine. The initiative also includes states that are not members of NATO. For Moldova, it would help to strengthen the country’s defense. A few days later, US Vice President Joe Biden says that Moldova will receive eight million dollars to support its process of approaching the EU. However, both initiatives must be approved by the US Congress before they become reality.

Association agreement with the EU is signed

Together with two other former Soviet republics, Ukraine and Georgia, Moldova signs an association agreement with the EU. The agreement gradually gives Moldovan exporting companies free access to the EU market and also means that the country receives technical and economic development support. In return, Moldova is committed to living up to the EU’s demands for respect for democracy and human rights, the fight against corruption, a strengthened legal society and a reformed economic system.

Increased readiness at the border with Transnistria

The government raises military readiness along the border with the Transnistrian breakaway republic following unrest in the neighboring Ukrainian city of Odessa. According to the Ukrainian government, the unrest has been provoked by Russians from Transnistria.

In connection with the Russian celebration of the victory of World War II, Deputy Prime Minister Dmitry Rogozin is visiting the breakaway Republic of Transnistria. He promises to continue Russian support and protection against what he describes as a threat from Ukraine. Russia accuses the Ukrainian government of blocking transnistrian border crossings.

Ready for association agreement with the EU

EU President Herman Van Rompuy invites Moldova to sign an association agreement with the EU on June 27. Romanian President Băsescu welcomes the message, while Russia believes that Moldova should hold new elections first. The Communist Party is well positioned in public opinion ahead of the November elections. Russia has threatened to overhaul its economic relations with Moldova if the government in Chișinău signs the agreement with the EU.

Parliament in Transnistria adopts a resolution calling on the Russian government and the UN to recognize the area as an independent and sovereign state. The President of the area addresses the same call to the EU, saying that recognition is the only way to create stability in the region.

Freedom of visa to the Schengen area

Moldovan citizens can start traveling to countries within the EU Schengen area without a visa. The decision applies to those who have biometric passports.

The President of Transnistria wants the area to become Russian

The President of the Transnistrian Parliament calls on the Russian government to annex the Moldovan outbreak state during a visit to Moscow. It happens the days after Russia annexed the Ukrainian peninsula Crimea. Moldovan President Timofti says that Russia would make a big mistake if it tried to annex part of Moldova. He appeals to the EU to speed up the process towards a Moldovan EU membership. He is strongly supported by the government in Romania.

US support for increased border protection

The United States is giving Moldova $ 10 million in support to strengthen border protection.

Putin: “The blockade against Transnistria must be lifted”

Russian President Vladimir Putin tells German Chancellor Angela Merkel that the blockade he believes Transnistria is exposed to must be lifted. A few days earlier, Putin has said the same thing to US President Barack Obama. The data are reminiscent of the allegations of persecution of Russians in Crimea that preceded the Russian annexation of the Ukrainian peninsula in May 2014. The head of the EU delegation in Moldova denies that there would be barriers to trade and communications between Transnistria and the rest of Moldova.

Residents of the autonomous region of Gagauzi are overwhelmingly voting for a closer relationship with the Russian-led customs union. Almost all participants in the referendum also oppose a rapprochement with the EU and support the region’s right to proclaim independence if Moldova loses or voluntarily gives up its independence. The turnout is just over 70 percent. There is widespread suspicion in Gagauzi that Moldova’s proximity to the EU is aimed at connecting the country to Romania. The Moldovan government has tried in vain to stop the referendum, which it sees as a threat to the country’s cohesion.

The EU offers freedom of visa

The European Parliament votes to abolish the visa requirement for EU countries for Moldovan citizens. In the past, the European Commission has recommended visa waivers for moldaver. The decision is expected to take effect in the spring.