Unemployment is at a modest level in Mexico, but about one in four of the official workforce is underemployed. In addition, many work outside the formal sector. The shortage of educated labor is great.

The proportion of working in the informal sector is estimated to amount to over half of the working Mexicans. These are mainly low-skilled people.

The right to unionize is guaranteed by law. The largest national organization is the CTM (Confederación de Trabajadores de México), which was previously linked to the PRI (see Political system). The share of union members has decreased and is currently only about 12 percent.

Trade unions that organize oil workers and teachers are particularly strong. The SNTE (Sindicato Nacional de Trabajadores de la Educación) teacher union is the largest union in Latin America. The teachers’ union ended up on a collision course with the then president Enrique Peña Nieto when he launched reforms of the education system in 2013 (see Current policy). SNTE previously stood close to PRI governments and considered corrupt and undemocratic. There is also a smaller outbreak compartment for teachers, CNTE (Coordinadora Nacional de Trabajadores de la Educación), which is more radical. 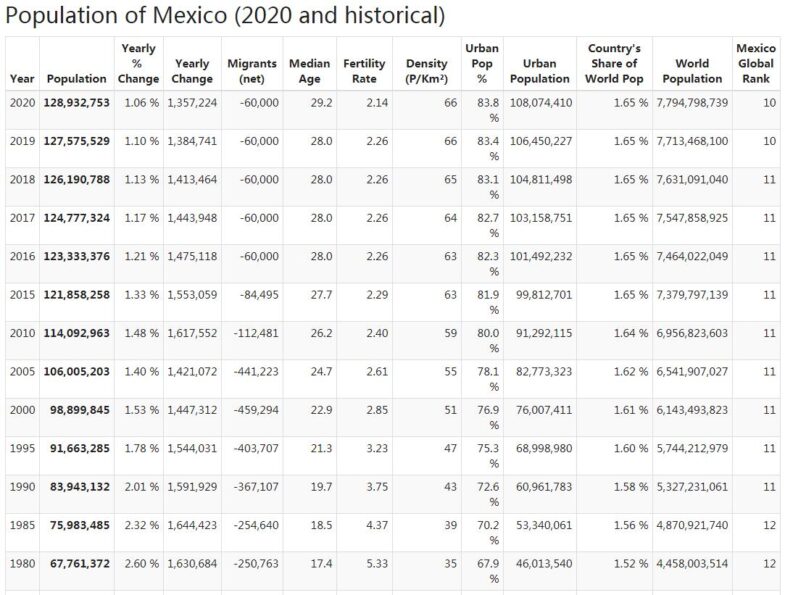 Employees at the assembly plants, maquiladoras, at the border with the United States are rarely unionized and lack the right to sickness pay, paid vacation and other basic rights. A large proportion of the employees are young, single women. Sexual abuse and other forms of harassment occur to a large extent.

Labor costs in Mexico are a fraction of those in the United States. Competition from mainly China has led to a decline in investment for a number of years, but now wage costs in China have risen to such an extent that interest in Mexico is once again increasing for American investors. The geographical proximity to the US market is of course also a competitive advantage.

Changes in labor law with, among other things, reduced employment protection were adopted at the end of 2012. The government hoped that increased flexibility for employers would lead to new jobs, but the results have been slim.

Leftist populist Andres Manuel López Obrador (often called Amlo) registers as a candidate in the July 2018 presidential election. This is the third time Amlo is running for the election. In the 2006 and 2012 elections he was a candidate for PRD, now he leads Morena, which he himself founded. Amlo has raised the idea of ​​an amnesty to try to put an end to the violence. It would then be subject to a referendum, as would the current government’s energy reform, which opened up the oil sector to private interests. The two candidates expected to become Amlo’s main opponent, PAN’s Ricardo Anaya and PRI’s José Antonio Meade, have dismissed the idea of ​​amnesty as “crazy” and illegal.

Finance Minister José Antonio Meade announces that he is resigning to try to become the PRI candidate in the 2018 presidential election. Meade has so far been independent and is not a member of the government party. But Peña Nieto states in positive terms about Meade who is considered to have a good chance of becoming a PRI candidate.

The two leading opposition parties PAN and PRD, as well as the smaller Citizens’ Movement, formally register an election alliance, ahead of the July 2018 elections. Obrador leads in opinion polls. However, the contradictions are large within and between parties in the new alliance.

State Prosecutor Raúl Cervantes resigns in what is seen as a victory for the fight against corruption. Former PRI Senator Cervantes, who has been a public prosecutor for a year, was expected to be appointed a newly established prosecutor’s office, a nine-year ordinance. The new post would replace the old prosecutor and, unlike it, be independent and not appointed by the president. Critics have accused Cervantes of hindering investigations of corruption among the supreme rulers. It has recently been revealed that he has a luxury car, worth $ 200,000, registered at a fake address.

This is the fourth time in two years that fatal clashes have taken place in prisons in the state of Nuevo León (see also February 2016). About 30 people are injured in connection with about 250 prisoners fighting security personnel. The UN calls on the authorities to conduct a thorough investigation of the incident.

Central Mexico is hit by an earthquake of magnitude 7.1 on the Richter scale. Among the 370 dead are 19 school children whose school in Mexico City collapses. Several other buildings in the capital are also destroyed. Criticism is later raised against the black building that did not meet the building standards. This applies, among other things, to the school building that collapsed.

Heavy earthquake in the south

An earthquake with magnitude 8.2 on the Richter scale shakes large parts of the country. The earthquake is the most powerful that hit Mexico in a century. Around 100 people perish. The epicenter of the earthquake is in the Pacific off the south coast, and the states of Oaxaca and Chiapa are worst affected. However, even in Mexico City, 100 miles from the epicenter, residents clearly feel the shaking and many leave their homes and walk out onto the street.

Mexico, the United States and Canada initiate a first round of talks aimed at renegotiating the Nafta Free Trade Agreement. During the election campaign, Trump called Nafta “the worst trade deal ever” and threatened to completely tear it down. Now the parties should instead try to agree on a new agreement.

A decision passed by Congress comes into force and means that it will be legal to grow cannabis for medical use and for research.

Journalist Javier Valdez Cárdenas is shot dead in his hometown of Culiacán in Sinaloa. Valdez was award-winning for his report on drug trafficking and organized crime; he was awarded the Committee to Protect Journalists International Press Freedom Award in 2011. He founded the magazine Ríodoce, which focused on crime and corruption in Sinaloa, one of the most violent states in the country. Valdez became the sixth journalist to be murdered in Mexico during the year.

Police in Italy arrest former Tamaulipas governor Tomás Yarrington, who is suspected of receiving millions in bribes from drug cartels such as Golfo and Zetas. Yarrington was governor in 1995-2005 and has been wanted for close to five years.

The state of Veracruz “is a huge mass grave” says the state’s chief prosecutor since 250 skulls were found in a mass grave. Drug dealers have been using Veracruz for years to dump corpses, he says. The mass grave may contain the remains of even more people.

US Secretary of State Rex Tillerson and Secretary of State John Kelly visit Mexico City to discuss migration and drug smuggling. Just a couple of days before, Washington has issued new restraint orders to US authorities to expel undocumented immigrants to the United States – and anyone who crosses the border illegally should be sent back to Mexico, regardless of nationality. Interior Minister Ángel Osorio Chong said after the visit that Mexico will not receive non-Mexicans expelled from the United States.

Tens of thousands of people are taking part in demonstrations in cities around Mexico, against newly incumbent US President Donald Trump and his anti-immigrant policies.

Mexicans working abroad, primarily in the United States, sent home nearly $ 27 billion in 2016, the Central Bank reports. This represents an increase of almost 9 percent from the previous year. US President Trump has pointed to the possibility of taxing the transfers – or stopping them entirely – as a way to force Mexico to pay for the wall he wants to build.

Israel is trying to curb disputes

Israeli Prime Minister Benjamin Netanyahu assures that relations with Mexico are good, since Mexico apologized for a Twitter comment by Netanyahu in support of US brick building. Netanyahu tweeted that a similar barrier in southern Israel has been successful.

After Donald Trump ordered the construction of a wall along the border – and once again said Mexico should pay – President Peña Nieto reiterated earlier statements that Mexico will not pay for any wall. Trump now plans to allow the US Congress to pay for the masonry project first, and then somehow force Mexico to replace the United States. One possibility mentioned is to impose duties of 20 percent on all imports from Mexico. After severe pressure from the opposition, Peña Nieto sets a planned visit to the US at the end of the month.

US newly elected President Donald Trump put an end to the Trans-Pacific Partnership (TPP) Free Trade Agreement, signed in February 2016 but not yet ratified by most participants. Mexico is one of three Latin American countries in TTP (the others are Chile and Peru). In total, the agreement, which is now on ice, includes twelve Pacific countries and Asia, which together account for one third of world trade.

At least six people are killed and more than 1,500 arrested in connection with several days of protests against a 20 percent increase in gasoline prices at the turn of the year. The government announced at the end of the year that gasoline subsidies will be abolished and prices will continue to rise in 2017.

Videgaray back – as Foreign Minister

Former Finance Minister Luis Videgaray, who resigned after Donald Trump’s contentious visit to Mexico in August 2016 (see September 2016), is returning as new foreign minister. Videgaray is closely familiar with Peña Nieto and his previous contacts with Trump employees are now believed to be an asset.