More than half of the workforce is employed in the service sector, while almost a third work in industry and one-tenth in agriculture.

More and more people are working in the informal sector. Unemployment has risen since the 1990s and stood at 9 percent in 2006, when sugar production fell sharply. Since then, it has declined slightly to 8.3 percent in 2013. Despite this, a large proportion of foreign workers from primarily China, India, Sri Lanka and Bangladesh in the industrial and construction sectors due to the shortage of educated domestic labor.

There are over 350 trade unions with a total of about 125,000 members (2015). Many of the trade union organizations are small because only seven members are required to form a union. There are seven trade union organizations, of which the National Trade Union Confederation (NTUC) is the largest. Almost a third of the labor force is unionized, but in the EPZ zone (see Industry), just over ten percent, since many companies there do not allow trade unions. 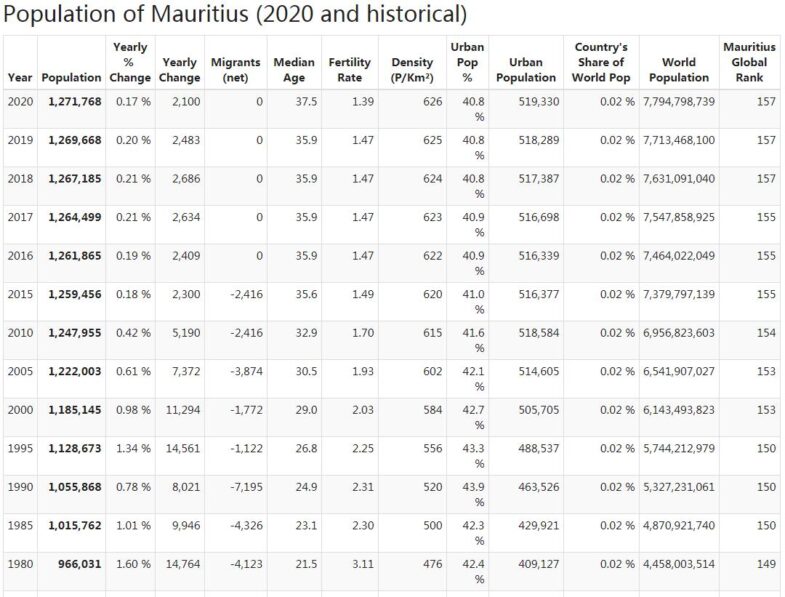 Two new cases of covid-19 are reported from Mauritius. These are two Mauritians brought home from India that have been found to be infected but have not shown any symptoms. The two belonged to a group of 149 people who were quarantined after returning home on May 9. In mid-May it was announced that Mauritius had no new cases in two weeks. So far, 334 cases of covid-19 have been reported and ten people have died in the disease.

Crisis for tourism in the wake of the Corona crisis

The Corona crisis hits the tourist industry so important to Mauritius. In April, the country only received a total of ten tourists, compared with more than 108,000 in the same month in 2019. In the first quarter of 2020, tourism fell by almost 34 percent, most of the shrinking tourist flows from Asia, but many European tourists also failed. It will take some time before the tourism industry can recover. In addition, some textile companies have been forced to close and sugar production is also having problems. According to some forecasts, Mauritius GDP will fall by over seven percent by 2020.

The quarantine is extended to June

Prime Minister Pravind Jugnauth announces that the country’s quarantine, introduced to prevent the spread of the new corona virus, will be extended to June 1. This is despite the fact that no new cases have been detected in five days. Of the 332 who have contracted covid-19, 312 have recovered, ten people have died and ten are still sick. In mid-May, some of the tough restrictions will be eased, including bakeries, butchers and fishmongers being reopened.

The quarantine is extended

Prime Minister Pravind Jugnauth insists that the residents can now only shop on special days, which depends on their last name. They also have to deal with their affairs in 30 minutes. All stores are also ordered to stay closed on Sundays. At the same time, the quarantine that would have expired today is extended to April 15 (see also 19 and 24 March 2020). So far, five people have died in covid-19 in Mauritius.

The first death in covid-19 in Mauritius

The first death in covid-19 is now reported from Mauritius. So far, 14 cases of viral disease have been reported in the country.

Mauritius is now quarantining and at six o’clock on March 20 as part of its efforts to prevent the spread of the new corona virus. Only those who work within the police, health care and emergency services and other essential functions may go to work. However, banks, supermarkets, bakeries and pharmacies should be open as usual. However, public transport will only go to a limited extent. Prime Minister Pravid Jugnauth emphasized that those working in the public sector do not risk losing their jobs.

Mauritius announces that the country will not let in any visitors who have been in the EU, Switzerland or the UK for the past two weeks. This is happening even though the country’s economy is dependent on tourism. Previously, similar restrictions have been imposed on travelers for people who have been to China, Iran, Italy, South Korea and Hong Kong. A cruise ship was later introduced to add to Mauritius. As yet, no cases of the covid-19 viral disease that have caused the ongoing pandemic in the world have been reported in the country.