Most Mauritanian people work with self-catering agriculture, usually livestock, or any other job in the informal sector of the economy. Many have been forced to leave their lives as nomads and move to the cities.

Unemployment is two-digit. Still, that doesn’t mean much because the figure only covers the formal sector, which according to some data includes only a quarter of the workforce.

More than 90 percent of the formal employees are affiliated with any of the country’s trade union movements. The largest trade union central organization is the Union des travailleurs de Mauritanie (UTM).

Hundreds of thousands of Mauritanian people live as slaves or work under slave-like conditions, according to human rights organizations. For a long time, the existence of slavery was officially denied, but in 2007 President Abdellahi apologized for the slavery suffered by haratins and various black groups (see also Population and Languages and Current Politics). 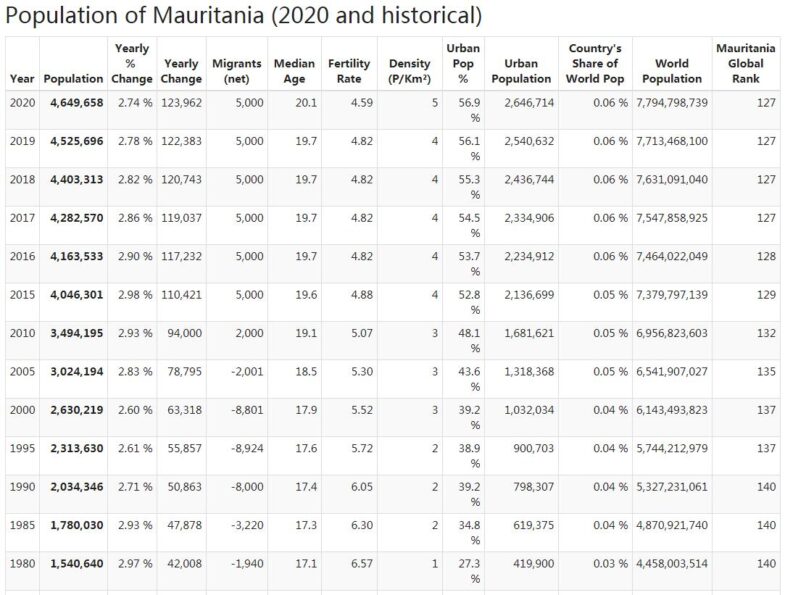 In celebrating Independence Day, the new flag is used for the first time, which was approved by the August referendum.

An appeals court changes the verdict of blogger Cheikh Ould Mohamed M’khaitir (see December 2014) to two years in prison and the equivalent of 146 euros in fines. A court ruled the original death penalty in April 2016, but changed the offense from blasphemy to “disbelief”, which has a lower penalty rate. In January 2017, the Supreme Court sent the case back to the lower court to “correct mistakes” – without further comment. The case has attracted international criticism and campaigns from Amnesty International and Human Rights Watch, among others. In Nouakchott, police are allowed to take tear gas against protesters who demand that he be executed. The new verdict is immediately appealed to the Supreme Court. One month after the amended verdict, M’khaitir has still not been released and his family does not say where he is.

The five-nation G5 Sahel force formed to fight jihadism begins its work. Soldiers from Mali, Niger and Burkina Faso gather for a first operation in the border region where the three countries meet, French military reports. Mauritania and Chad are also part of the G5 Sahel.

Yes to abolish the Senate and change the flag

In the referendum boycotted by the opposition, 85 percent voted in favor of the government’s proposal to abolish the Senate and change the flag. The new flag is like the previous green with a yellow star and crescent moon, but gets red bands at the top and bottom. The red represents blood and should honor those who fought for freedom from France. The turnout is 54 percent.

Clashes before a referendum

Police and opposition activists gather in Nouakchott on the last day before the disputed referendum on proposed constitutional changes. The authorities had not authorized protests. Both Islamists and anti-slavery activists oppose the proposal that the Senate voted down in March.

The opposition boycott the referendum

A number of opposition parties come together to form the “No” coalition, which aims to work for a broad boycott of the government’s planned referendum on August 5. The referendum announced in March concerns the abolition of the Senate as well as a change of the Mauritanian flag. The opposition believes that the vote is, in fact, part of the president’s strategy of being re-elected, even though the constitution does not allow it.

The UN provides a sign for regional military force

The UN Security Council adopts a resolution that marks the military force decided by the G5 Sahel states in February. However, there will be no direct UN mandate, as advocated by France. The United States considers that such a mandate is not needed as the force must adhere to the territories of the participating countries. The force will have its headquarters in Mali. According to plans, it will consist of 10,000 police and soldiers and be up and running by the end of the year. The EU has pledged EUR 50 million in support of the new force.

The Senate votes against its own resolution

When the Senate decides on the government’s proposal to dissolve the first chamber, 33 of the 56 senators vote no. The outcome seems to surprise the government; Twenty-four of those voting against the proposal belong to the governing UPR. The Second Chamber, the National Assembly, has recently voted for the change by an overwhelming majority. The result of the Senate’s no will be that President Abdelaziz will announce a referendum shortly afterwards.

Leaders from the G5 Sahel States – Mali, Chad, Niger, Burkina Faso and Mauritania – decide at a meeting in Bamako to establish a new regional force to fight extreme Islamist groups. The force has to get a clear sign from the UN and is hoped to be financed by European countries, which is justified by the fact that it would save the lives of European soldiers.

Since the Supreme Court reversed the case of the blogger accused of blasphemy (see December 2014) to a lower court, thousands of people in Nouakchott demonstrate with demands for the death penalty to be enforced. Mohamed Cheikh Ould Mohamed M’khaitir’s family is said to have fled the country due to threats to their safety.