Characteristic of Malta’s labor market is lower unemployment than the EU average, a large proportion of public employees and relatively few women in working life.

Malta had one of the lowest unemployment rates in the EU at the middle of the 2010s. Youth unemployment was also low compared to many other EU countries.

About 15 percent of the country’s labor force works full or part-time in the tourism sector. In addition, many work indirectly with services and goods demanded by tourists.

The employment rate is low among women, but has increased in recent years. About 42 percent of working-age women worked outside the home in 2010. That figure had risen to 51 percent in 2014.

More than half of the employees belong to a trade union. The biggest is The General Workers’ Union (GWU) which is formally independent but is close to the Labor Party. GWU is not a member of the Confederation of Malta Trade Unions umbrella organization that organizes a number of other unions.

The unions can operate relatively freely. With the exception of police and military, everyone has the right to strike. However, the government can force the parties in a labor dispute to mediate, leading to a binding agreement. For more than 20 years, the International Labor Organization (ILO) has argued that it violates Convention No. 87, which states that both parties must request mediation. 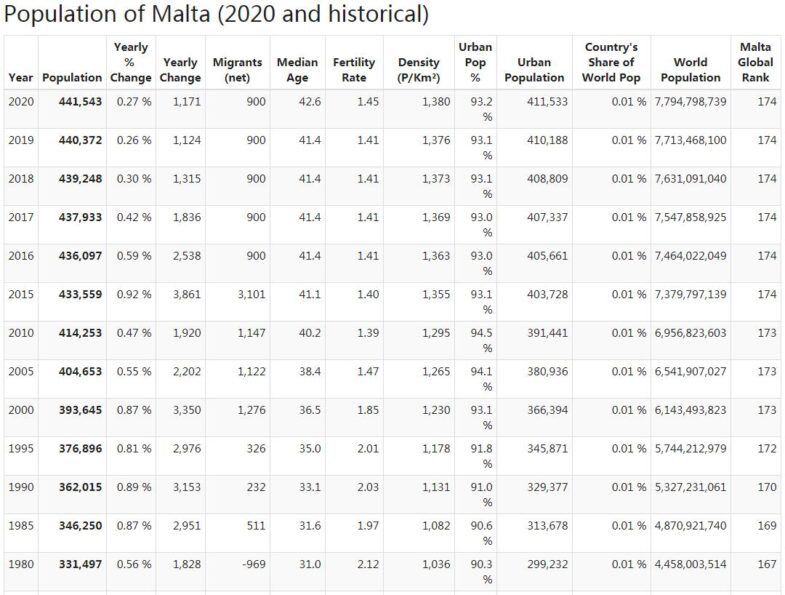 In 2008, the trade union GWU issued a report on what was called the exploitation of migrant workers. According to the report, African immigrants who live in the country without a permit often perform risky jobs on, for example, road construction. It was common for these workers to be paid less than the statutory minimum wage requires.

Three are indicted for journalist murder

Three men are accused of murdering journalist and blogger Daphne Caruana Galizia (see December and October, respectively). The men, two of whom are brothers, are suspected of having manufactured the car bomb that killed Galizia as well as having participated in the murder itself.

After visiting Malta to investigate the functioning of the judiciary, parliamentarians state that there is a culture of impunity among some high ranking officials in the country. The parliamentary group has made a visit to Malta to gather facts after the murder of a famous journalist (see October). After the group presents its report, the European Parliament decides that a dialogue on legal security should be initiated with the Maltese government.

All persons arrested on suspicion of involvement in the murder of journalist Daphne Galizia (see October) are Maltese, according to authorities.

Thousands of people are demonstrating for the second Sunday in a row, demanding that those responsible be held accountable for the murder of Daphne Caruana Galizia. Many want the chief of police and state prosecutors dismissed because they, together with the government, are seen as responsible for corruption, money laundering and other mafia crimes in the country – crime revealed by Galizia at the cost of losing her life. The murder investigation will be conducted with the support of the US FBI, Europol and the Dutch police.

Renowned blogger and journalist, Daphne Caruana Galizia, is killed by a car bomb. Her blog post on corruption and investigation into the Panama scandal and its connection to politicians in Malta, including Prime Minister Joseph Muscat, led to elections being held earlier than planned (see June). Prime Minister Muscat condemns the deed and Malta is asking for help from, among other things, the US Security Service FBI in investigating the case.

Parliament votes almost unanimously to give gay couples the right to marry. In 2014 it became legal to register partnerships and in 2011 divorce was legalized. Abortion is still prohibited.

The Labor Party wins the election

Prime Minister Joseph Muscat announces victory after the parliamentary elections. Muscats The Labor Party receives 55 percent of the vote and 37 seats in Parliament, despite the fact that he and the party have been sunk by corruption charges in connection with the so-called Panama leak (see Current Policy). The Nationalist Party is supported by 43 percent of voters and wins 30 seats.

A scandal surrounding Prime Minister Joseph Muscat has led him to decide that parliamentary elections will be held on June 3. Muscat’s wife has been accused of moving money to Panama to escape tax (by owning a so-called offshore company, also known as a mailbox company). However, Muscat’s wife denies the allegations and in order to maintain her and the government’s credibility, Joseph Muscat decides to announce new elections.