The formal labor market is small; a large majority of males live on agriculture, fishing and livestock management for their own housing needs. Even in cities, the informal sector of the economy is extensive. Hundreds of thousands of Malaysians work for jobs abroad, mainly in Ivory Coast, France and Senegal.

Even within the formal workforce, agriculture dominates, which employs almost three out of four employees. Many with formal employment are found in the public sector. Formal unemployment is around 10 per cent, but there is no reliable data on the proportion of unemployed.

In Mali there are laws that regulate working conditions, but far from all workplaces the laws apply and many employers do not even know them. A minimum wage is fixed, but it is so low that it is not enough to support a normal-sized family.

The right to form trade unions and to strike is enshrined in the Constitution. About 95 percent of the formal employees are union members. Strikes are quite common.

The trade union organization Union nationale des travailleurs du Mali (UNTM) played a major role in the democratization of Mali in the 1990s. However, political disagreement in 1997 led to the fragmentation of UNTM. Then, alongside UNTM, a new umbrella organization, Conféderation syndicale des travailleurs du Mali (CSTM), was formed, which now collaborates with several independent unions. 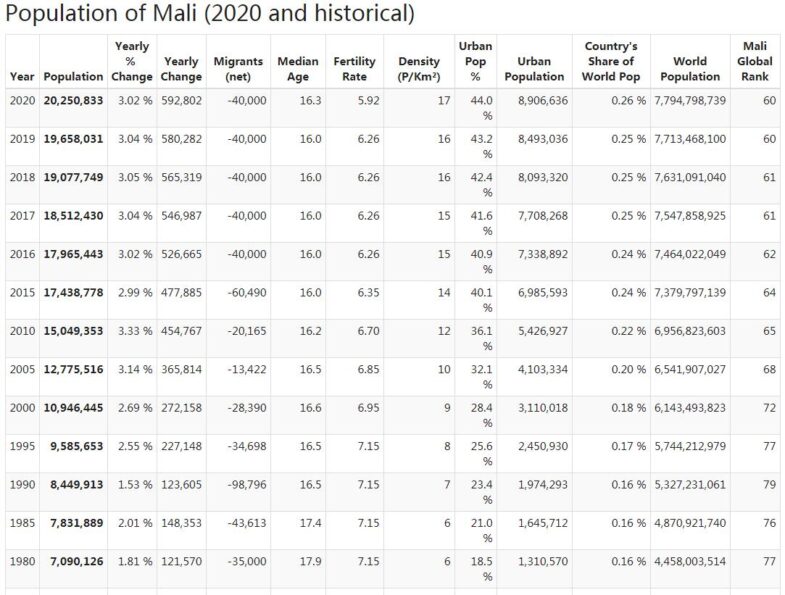 Forced labor exists, not least information on slavery among Tuareg governments. Child labor is also common, although prohibited. Many children have been robbed by organized leagues for forced labor, especially the Ivory Coast.

Treason charges against ex-president are closed

Decides in a secret vote that former President Amadou Toumani Touré should not be tried (see March 2014);

Migrant settlement with the EU

Mali has, as the first country in Africa, entered into an agreement with Mali to take back Malian asylum seekers who have been rejected. In return, Mali will receive support for security services and border guards, as well as with initiatives to create jobs for young people in certain regions.

The conductor Sanogo is facing trial

Amadou Sanogo and 16 other former soldiers are facing trial, charged with murdering 21 elite soldiers during the attempted counter-attack that was made in April 2012. Sanogo, who has been detained since November 2013, faces the death penalty.

Election of elections is carried out

The election of 12,000 municipal councilors that would have been held in 2014 is implemented, despite the uncertain situation in the country. At least six people are killed in unrest in connection with the election. In only 15 out of 703 municipalities, it is formally impossible to carry out elections, but in many places, mainly in the north, in practice no elections are carried out. The last election held at the local level was 2009.

A suicide bomber dies in connection with an attack targeting patrolling Swedish soldiers in Timbuktu. None of the UN soldiers are injured. A week earlier, two Chadian UN soldiers were killed in northern Mali.

A leader of the former CMA guerrilla, Cheikh Ag Aoussa, dies in an explosion when on his way from a meeting with Minusma in Kidal. It is unclear whether it was a targeted attack or whether Aoussa’s car was driving on a road mine. The death causes concern that the security situation will deteriorate further.

Four MPs leave RPM and join Adéma. They accuse the government of weak government, which causes the northern part of the country to be in crisis, youth unemployment galloping.

War criminal conviction in the ICC

A Malian is sentenced to nine years in prison at the International Criminal Court (ICC) in The Hague for ordering the destruction of religious buildings and historical monuments in Timbuktu. Ahmad al-Faqi al-Mahdi was arrested in Niger and handed over to The Hague in September 2015. It is the first time that cultural devastation has been classified as a war crime. Faqi al-Mahdi is also the first jihadist prosecuted at the ICC. He must have ordered the destruction of nine mausoleums and a mosque from the 15th and 16th centuries. When the trial began, Faqi al-Mahdi acknowledged himself guilty and apologized to the outside world for the destruction of the ancient shrines.

About 100 political and religious leaders, as well as diplomats and UNESCO representatives, attend a ceremony when sacred doors to a 15th-century mosque in Timbuktu are re-opened. It has been restored after the destruction of the Islamists (see Religion).

At least twelve people are reported to have been killed in fighting between former CMA rebels and a government-run militia group. The situation is tense in the region where new battles erupted in August.

Parliament approves a new electoral law, which means, among other things, that the fee to stand as presidential candidate is increased by two and a half times, to the equivalent of about SEK 370,000.

The Minister of Defense dismissed

Thieman Hubet Coulibaly may go with reference to the deteriorating security situation with renewed attacks on state and military facilities in the central parts of the country. The day before he was fired, suspected jihadists had captured the small community of Boni, but the military regained control after a day.

Authorities say 2.1 tonnes of cannabis were found in a truck outside Bamako. The seizure is the largest so far made by customs; Earlier this year, an anti-narcotics unit seized 2.7 tonnes of cannabis in the same area. The value of the latest fittings is estimated at around $ 6 million.

Attack on army base

Seventeen soldiers are killed and 35 injured when Islamists attack a base in Nampala in the middle of the country. Ansar al-Din and Ansiprj both take on what the government calls a “coordinated terrorist attack”.

Renovation in the government

Among nine new ministers there is a former rebel from the CMA. In total, the government now has 34 ministers, two more than before. Modibo Keïta remains as prime minister.

The Security Council decides to send another 2,500 peacekeeping soldiers to Mali. The UN effort Minusma will thus amount to a maximum of 15 200 soldiers and police.

Islamist threat against the UN and France

A group of fulani (peul, see Population and Languages), the National Alliance for the Defense of Paul’s Identity and the Restoration of Justice (Ansiprj), obscures the image that the year-old peace treaty is about to fall. New battles have been reported from Kidal, Gao and Timbuktu in the north, and in Mopti and Ségou in central Mali.

Twelve UN soldiers are killed during the month. In an attack in Aguelhok in Kidal, Chadian soldiers die while UN soldiers from Togo fall victim to an attack in an area in central Mali where Minusma was not previously subjected to deadly violence. A Chinese soldier is killed in a grenade attack against the UN base in Gao, where three are also seriously injured. A civilian French miner dies in a separate attack in Gao. Aqim claims to be behind the death. A total of 65 UN soldiers have been killed in active service during the operation in Mali, and four have been accidentally shot to death by their own, according to UN statistics. At least seven Malian militants are also killed during the month, in northern Mali.

Many arrested during the state of emergency

According to the Minister of Security, 2,000 people have been arrested during the current state of emergency. Parliament voted the day before to extend the state of emergency which has been in effect since November 2015.

Seven Guinean UN soldiers are killed and about 30 injured when Ansar al-Din attacks their base in Kidal.

Mali and Burkina Faso decide to cooperate against the increased threat from Islamist terrorists. The countries, which have recently suffered severe acts of terrorism, will increase the exchange of intelligence tasks and carry out joint investigations.