Most Maldives work in tourism and trade. Lack of domestic labor, primarily in the construction industry, causes the Maldives to house a large number of migrant workers from other South Asian countries.

Seven out of ten Maldives with a formal employment work in the country’s large service sector, which mainly consists of tourism and trade. Just under a quarter can be found in the small-scale industry. Other wage earners are found in agriculture and fishing. In the informal labor market, small-scale agriculture dominates.

Since the 1990s, the construction industry has grown rapidly. With foreign support, the Maldives has invested in major infrastructure projects, including new airports and thermal power plants. This has led to a shortage of domestic labor, resulting in labor migration. The Maldives now houses tens of thousands of migrant workers from mainly Pakistan, Sri Lanka, India and Bangladesh. 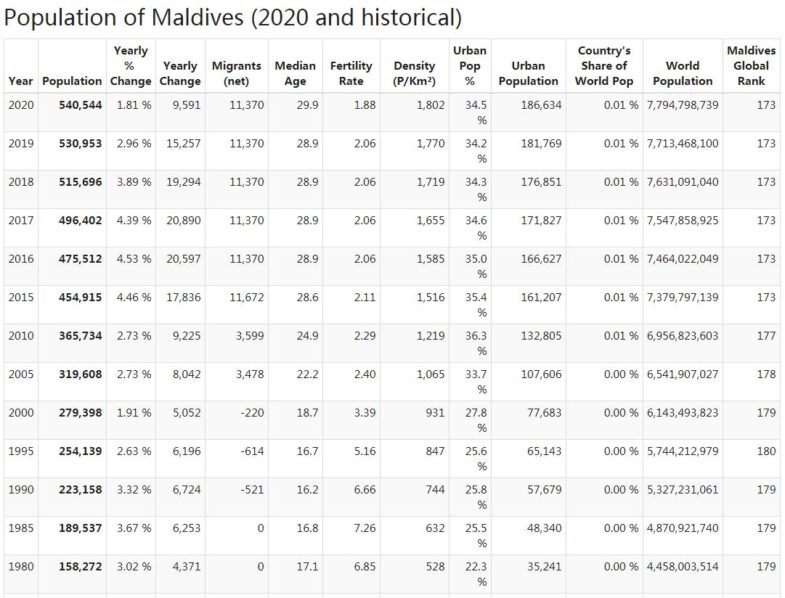 Unions became legal only when the democratic constitution came into force in 2008. The new constitution also guarantees the right to strike.

Jail against Nashid is set aside

The Supreme Court cancels prison sentence against President Nashid. He was sentenced in 2015 to 13 years in prison for terrorist offenses. The Court notes that the entire indictment against Nashid was erroneous and that he would never have been convicted in the trial that the United Nations described as “politically motivated”. During the autumn, most exile politicians return to the Maldives where their sentences are revoked.

Ibrahim Mohamed Solih gives the presidential speech at a ceremony in Malé. In his installation speech, he emphasizes the seriousness of the economic crisis in the country and turns to India for help. Indian Prime Minister Modi is present at the ceremony and promises to help the neighboring country out of the crisis. The Maldives have traditionally had a close relationship with India, but former President Yamin pushed the country closer to China, with the result that Beijing’s debt grew sharply.

President Mohamed Nashir returns home to the Maldives from his exile. Two days earlier, the Supreme Court has withdrawn the arrest warrant against him on the grounds that he cannot be arrested before his 13-year jail sentence has been processed.

The Supreme Court rejects President Yamin’s request to have the presidential election (see September 2018) annulled due to election fraud.

Yamin appeals against the election result

President Yamin appeals the outcome of the presidential election to the Supreme Court, despite having previously defeated himself. Yamin openly urged his supporters to protest the election results, which his party PPM claims are based on cheating with the ballots.

Imprisoned President Gayum is released on bail. Gayum supported Solih in the presidential election, as did the exiled Nashid.

In his first speech after the election victory, Solih calls on the outgoing President Yamin to release all political prisoners imprisoned during his time in power. On the same day, five political opponents are released, including MP Abdulla Rivaz. He was one of many opposites who were detained indefinitely in February 2018, accused of participating in a conspiracy against Yamin by trying to bring him to trial before the state court.

The opposition candidate Ibrahim Muhamed Solih from the MDP already wins in the first round of the presidential election with 58 percent of the vote against 41 percent for President Yamin from the PPM. It is the largest margin of victory in a Maldivian election since democracy was introduced in 2008. The victory is described as surprising because the government’s pressure against the opposition and the media has been great before the election and many analysts felt that Yamin’s victory was almost a given. After Solih’s election victory, opposites go out into the streets and celebrate. Yamin says he accepts the election loss.

The opposition agrees on a presidential candidate

After the disgruntled MDP leader Mohamed Nashid was disqualified by the Election Commission as a candidate in the September 23 presidential election, several opposition parties agree on a joint presidential candidate: Ibrahim Muhamed Solih, who is leading the opposition in parliament. Solih promises that dissidents will return from exile if he wins the election, and that Parliament, the Supreme Court and the Election Commission should be democratized and regain their powers. He also promises improved relations with the Western world and criticizes the Yamin government for making itself dependent on China by receiving large loans from Beijing.

Gayum is sentenced to prison

Former Maldives dictator Gayum is sentenced to 19 months in prison for trying to stop an investigation into a suspected conspiracy against President Abdulla Yamin. According to the court, Gayum refused to give investigators access to detailed information on his mobile phone. Amnesty International writes that the verdict against Gayum is “politically motivated” and a “result of a trial that does not live up to international standards”.

Gayum is being prosecuted for coup attempt

President Gayum, two judges at the Supreme Court, a former police chief and several other civil servants are being indicted for terrorism and coup attempts.

The state of emergency is extended for one month

President Yamin extends the state of emergency by 30 days. This means, among other things, that during this period the police and other authorities are given far-reaching powers to seize opposites and arrest them.

The government regains control of Parliament

The Supreme Court is withdrawing the previous decision to give twelve opposition members in Parliament their seats back. The twelve were banned by President Yamin as they left his party and went over to the opposition. In this way, the government has again secured the majority in Parliament.

A few hours after two of the Supreme Court’s five members were arrested and state of emergency introduced by President Yamin, the court’s remaining three judges turn on its heels and revoke the decision to annul the lawsuits against nine prominent opposition politicians, including President Nashid. The reason for the amended decision is that it is done “in the light of questions asked by the President”. Yamin has ordered an investigation into the Supreme Court’s action to find out whether it is a “coup against the president”.

HD judges and Gayum are arrested

At dawn, security forces storm the Supreme Court building and seize Chief Judge Abdulla Said as well as another high ranking judge. According to the police, they are both suspected of corruption. Thereafter, President Yamin faces a 15-day state of emergency, giving police and security forces far-reaching powers to arrest and detain suspects. Late the night before, President Gayum was arrested in his home. Gayum is half brother to Yamin, but sympathizes with the opposition.

In practice, the government dissolves Parliament when today’s meeting of the Legislative Assembly is suspended indefinitely for “security reasons”. After the Supreme Court decides that twelve kicked-off jumpers from President Yamin’s party will regain their seats, Parliament could put Yamin and his government before the national court and dismiss him. The government has so far refused to release the nine convicted opposition politicians, including President Nashid from the MDP, who was released by the Supreme Court a few days earlier. The soldiers guarding the parliament building since July 2017 have not been withdrawn. President Nashid remains abroad but says he will run for office in the next presidential election.

The Supreme Court (HD) unexpectedly decides that President Nashid and eight other opposition politicians should be acquitted of crimes they have been convicted of and their trials to be redone. Former Vice President Ahmed Ahib Abdul Ghafur also has his sentence annulled. The reason is that, according to HD, the legal processes contravened the constitution and international law. HD also decides that twelve former MPs who lost their seats when they resigned from President Yamin’s party should regain their seats. Among them is Ahmed Adib, who was sentenced to 15 years in prison for attempted murder of the president in 2015. The decision will have major political consequences as it means that the opposition regains the majority in the legislative assembly. In 2015, Nashid was sentenced to 13 years in prison for terrorist offenses and is in exile in the UK where he received political asylum. He says when the HD decision is made public that he plans to return home, but not immediately. However, he says that President Yamin and his government must now resign. The president questions the decision but says he will respect it. Despite this, the national police chief has been fired since the police went out and said that the politicians who are imprisoned will be released. In the evening following HD’s message, the tension on Malé’s streets rises as the police meet hundreds of celebrating opposition supporters with tear gas.