Unemployment in Malaysia is low and wages are high compared to other countries in the region. Foreign workers with poor conditions often perform the most dangerous and lowest paid jobs. Employees have the right to organize themselves, but in practice the trade union rights are restricted.

About a tenth of the labor force is found in the agricultural sector, while over a quarter are employed in industry. Others work in the large service sector, which includes tourism, trade and government.

The government has long had the goal that unemployment should not exceed 4 percent, and this has largely been achieved. However, among youth, unemployment is higher.

In February 2018, there were 1.8 million registered guest workers in Malaysia, of which 40 percent came from Indonesia, 22 percent from Nepal and 15 percent from Bangladesh. Estimates of the number of paperless migrant workers vary between 3 million and 4 million. The foreign workforce is first affected by cuts. From time to time, the authorities send home labor immigrants for economic, security or political reasons. The workers are attracted to Malaysia by relatively high wages, especially in comparison with Indonesia.

The Malaysian employment law does not apply to household employees, who are often migrant workers. This means that they lack the right to maternity allowances, minimum wages and so on, which makes them discriminated against in the labor market. The maids have often been abused and forced into slave-like work.

After a series of abuses on Indonesian maids, Indonesia in 2009 banned women from going to Malaysia to work as maids. The ban was lifted in 2011 after the two countries entered into an agreement that gave the maids the right to one day of rest a week and abolished the compulsion to hand over the passport to the employer. Cambodia has also, for a period, stopped its maids from traveling to Malaysia after reports of abuse. 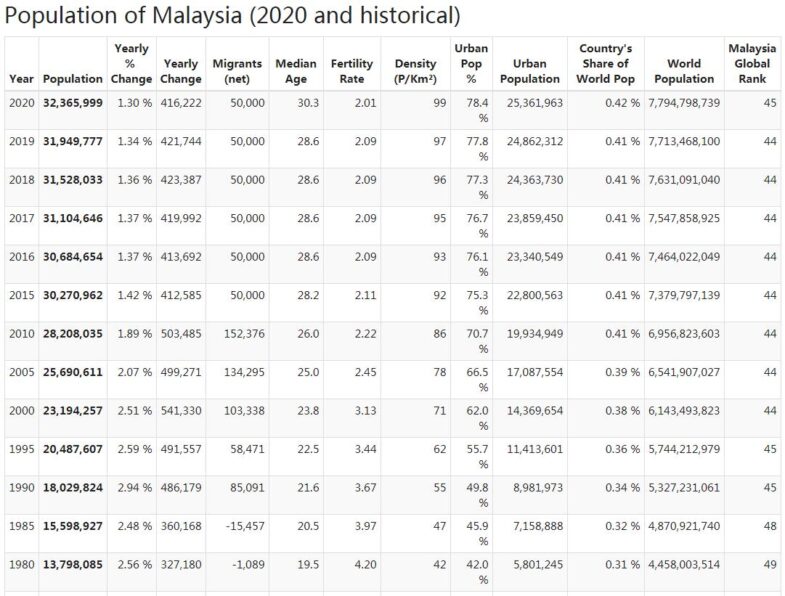 The trade union movement is dominated by the largest federation, the Malaysian Trade Union Congress (MTUC), which organizes both private and public employees. Around a tenth of the workforce is unionized. Few foreign workers are members of trade unions because they often have contracts that prohibit them from organizing trade unions.

Trade union rights are circumscribed, although they have some protection in the Constitution. The right to strike and the right to collective bargaining are limited. New unions must be approved by the authorities, a process that often takes several years. Trade unions have little influence over wages that fluctuate in line with the business cycle, especially in export companies.

In 2013 and 2014, minimum wages were introduced for Malaysian and foreign workers, with the exception of domestic employees. The minimum wages meant a salary increase of just over 30 percent for many employees and have especially benefited agricultural workers, of which almost half previously earned less than the minimum wage.

It is forbidden for children under the age of 14 to work, but it still exists in family businesses. Otherwise, child laborers have largely been replaced by foreign workers, according to the government.

Tens of thousands of homeless people after floods

Northern Malaysia is suffering from the worst floods in 30 years due to heavy rains. Prime Minister Najib Razak is criticized for being in the United States and playing golf with President Obama, while close to 160,000 people have been forced to leave their homes. However, he returns quickly and promises about $ 160 million in disaster relief efforts.

The law of blasphemy should be tightened

Prime Minister Najib Razak backs from a previous pledge to abolish the anti-blasphemy law, which is criticized for being used against religious minorities and political opponents. Najib Razak now says that the law will be stricter.

Malaysia gets a seat on the UN Security Council

Malaysia gets one of the five non-permanent seats in the UN Security Council together with Venezuela, Angola, New Zealand and Spain. The mandate is valid from 1 January 2015 and lasts for two years.

Malaysia Airlines will lay off 6,000 employees

Malaysia Airlines’ disastrous economy results in the airline dismissing 6,000 employees, which is equivalent to almost one-third of its workforce. A restructuring of the company is ongoing.

National day of mourning for the victims of the plane crash

Malaysia is holding a national day of mourning for civilians for the first time. National grief days have previously been held only for members of the Sultan family and government representatives. The ceremony is held as the remnants of 20 of the 43 Malaysians killed in the plane crash in Ukraine have arrived in their home country (see July 2018). A silent minute is held throughout the country and both the sultan and the prime minister are present as the coffins are carried out of the aircraft.

The counter-terrorism authorities announce that they have revealed and stopped militant Islamists’ plans to blow up a number of breweries and pubs.

An aircraft from Malaysia Airlines crashes in eastern Ukraine, en route from Amsterdam to Kuala Lumpur, with 298 people aboard. Prorussian separatists are accused of shooting down the plane.

Only Muslims may call God Allah

The Supreme Court states that only Muslims may call their God to Allah. Thus, a perennial litigation is over (see Religion). The ban is criticized by human rights organizations such as Amnesty International, which believes it violates freedom of expression.

Just over three months after the Malaysia Airlines plane crashed with 239 people on board, the search has cost $ 57 billion, but remains unsuccessful. A damages of $ 50,000 to the families of the missing are beginning to be paid.

Anwar Ibrahim is sentenced to five years in prison

Opposition leader Anwar Ibrahim is sentenced to five years in prison for homosexual acts following the appeal of the liberating sentence (see January 2012 and Current Policy).

Passenger plane disappears without a trace

A Malaysian passenger plane with 239 people on board disappears without a trace on the road from Kuala Lumpur to Beijing. Most of the passengers are from China. Information that there are people with fake passports on board raises questions about a possible hijacking or a blast attack. One of the largest investigative actions in aviation history begins with 26 nations involved, but the aircraft is not found.

A Malaysian couple are sentenced to death by hanging for murder on their Indonesian maid. The 26-year-old woman died in 2011 in a hospital in Malaysia due to starvation after losing weight to 26 kilos after just over two years in the couple’s home. The verdict came after Indonesia and Malaysia signed an agreement to improve the situation of Indonesian domestic workers in Malaysia, where they are often treated poorly.