About 85 percent of Malawians are employed in agriculture, mainly as self-sufficient small farmers. A large part of the small farms are run by women, while men often seek temporary wage work on the plantations.

Wages are very low, and inflation has meant that real wages have eroded and fallen since the turn of the millennium.

The officially registered unemployment rate has been around six percent in recent years, but in reality it is much higher. Many who are unemployed or underemployed choose not to register as unemployed because they are not entitled to compensation.

The right to unionize is respected by the authorities, but less than a fifth of the formal employees use that right. The Malawi Congress of Trade Unions (MCTU) has over 20 affiliates and 113,000 members (2008). 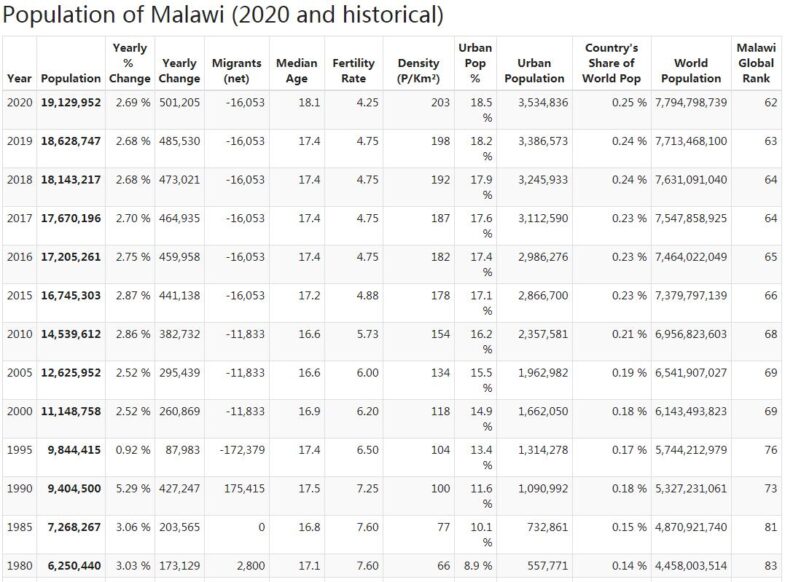 Opposition candidate Lazarus Chakwera wins the election and is installed as president. In his first speech, he promises to work for the good of all Malaysians. Chakwera wins over incumbent President Peter Mutharika with 59 percent of the vote against Mutharika’s 39 percent. The turnout was just under 65 percent. The election has been called historic because the original election held last year was sentenced by the Constitutional Court (see June 23, 2020 and Current Policy). At that time Mutharika took home the victory but the opposition claimed electoral fraud and many months of demonstrations followed. Mutharika now accuses the opposition of cheating, violence and harassment during Election Day, but the election authority says the isolated incidents reported did not affect the election result. The election is hailed by the region’s leaders as a peaceful handover.

Malawians are up for election to elect a president just over a year after the last presidential election (see May 21, 2019). When the Election Commission last year declared incumbent President Peter Mutharika as the winner, the opposition did not accept the result because of suspected election fraud (see May 31, 2019). The Constitutional Court examined the case and found, among other things, that the result lists were corrected afterwards. The election result was annulled and the court ordered that new elections be held. Mutharika has for a long time tried to stop the election and called the court’s ruling a “legal coup”. There are many indications that the opposition coalition candidate, Lazarus Chakwera, will take home the electoral victory. Due to the corona pandemic, no foreign election observers are present. The electoral process is reported to go smoothly but the queues are long and according to journalists in place, voters completely disregard the rules of conduct on physical distancing introduced due to covid-19.

The head of the electoral authority resigns

The disputed head of the country’s electoral authority, Jane Ansah, resigns. The Supreme Court annulled last year’s presidential election earlier this year (see February 4, 2020) and the opposition has since demanded Ansah’s resignation because she is considered to be closely allied with President Mutharika. The Election Authority has recently decided to postpone the election, which will now be held on June 23.

The opposition party United Transformation Movement (UTM) is subjected to an attack in the capital Lilongwe. Petrol bombs are thrown against the party’s office, but the bombs also hit a private home above the office where a family is sleeping. Several family members are taken to the hospital, at least three of whom die due to burns. A few days earlier, a vehicle belonging to UTM was also subjected to a petrol bomb attack. In February, the Constitutional Court annulled the results of last year’s presidential election (see February 4, 2020)). The incumbent President Peter Mutharika has tried to tear up the verdict but without success. Presidential elections will be held July 2. The day after the attack on UTM’s office, the opposition registers a joint candidacy with the Malawi Congress Party’s Lazarus Chakwera as presidential candidate and UTM’s Saulos Chilima as vice president. Mutharika also registers his presidential candidacy.

The Constitutional Court is trying to shut down

The Supreme Court’s decision to stop the closure of Malawi is extended indefinitely (see April 17, 2020). The Constitutional Court now gets the case on its table and will decide the case.

The Supreme Court postpones the closure

President Peter Mutharika’s attempt to shut down Malawi because of the spread of covid-19 is temporarily halted by the country’s highest court. The decision to introduce a three-week shutdown was challenged by the human rights organization Human Rights Defenders Coalition, which believes that the government has not taken any measures to facilitate and protect the country’s poor. The day before the court decision, a couple of thousand market sellers demonstrate in protest of the upcoming restrictions. The traders are totally dependent on the daily income from the market and a curfew would be devastating for them.

Reduced salary in the fight against corona

President Peter Mutharika cuts his and all government members’ salaries by ten percent. The money should instead go to fight corona. So far, four coronary cases have been confirmed in the country. Mutharika has declared an emergency permit to control the spread of virus and all schools are closed until further notice.

Presidential elections will be held in July

The Election Authority announces that a new presidential election will be held July 2. Both opposition parties and the ruling DPP have formed alliances with smaller parties these days in an attempt to gather votes for their own candidate. In the latest development, President Peter Mutharika has formed a new government and the human rights activists arrested earlier this month have been released against bail. Legal activists and the opposition have tried to force the chairman of the electoral authority to step down, but still without results. Both Mutharika and the electoral authority have strongly criticized the Constitutional Court’s ruling. Mutharika has filed an appeal with the country’s highest court of appeal.

Two human rights activists are arrested accused of high treason. The arrest comes just a few hours after President Peter Mutharika warned the Human Rights Defenders Coalition (HRDC) to organize more protest actions. Since the May elections last year, HRDC has organized a number of demonstrations in the country. The organization has protested against the contested election result and demanded, among other things, that the electoral authority be replaced.

The result of the presidential election is annulled

The Constitutional Court cancels the outcome of the 2019 presidential election (see May 26, 2019). The Court orders that new elections be held within 150 days. Until then, President Peter Mutharika remains in office. The judges strongly criticize the electoral authority and say, among other things, in their verdict that cheating and offenses occurred to the extent that the result is not fair. The rally is met with rejoicing in the city of Blantyre, the country’s economic hub. It is the first time since independence from Britain in 1964 that the outcome of a presidential election has been tried by a court. Demonstrations have been held in several cities since the election authority declared Mutharika the winner. Police and security forces have tried to quell the protest statements, resulting in violence. A police officer has been stoned to death, several protesters have been arrested and one person has died in custody. The police are accused of raping women who participated in the protests.