The majority of the Madagascans work in the family’s own farm and a large part of them grow exclusively for household needs. The few formal jobs that exist in the industry and the service sector are located in the cities, but without such training and contacts it is difficult to get such jobs.

In many developing countries, no unemployment allowance is paid and therefore unemployed people often choose not to register with the authorities. This means that the unemployment rate in reality is significantly higher than the official statistics show. In addition, there are major differences between countries in the collection of statistics on unemployment.

Tens of thousands of people work in companies in so-called economic free trade zones. The employees in the zones lack most union rights, although there is a trade union that works for their cause.

The informal sector of the economy is estimated to employ more than half of the residents of the capital Antananarivo. 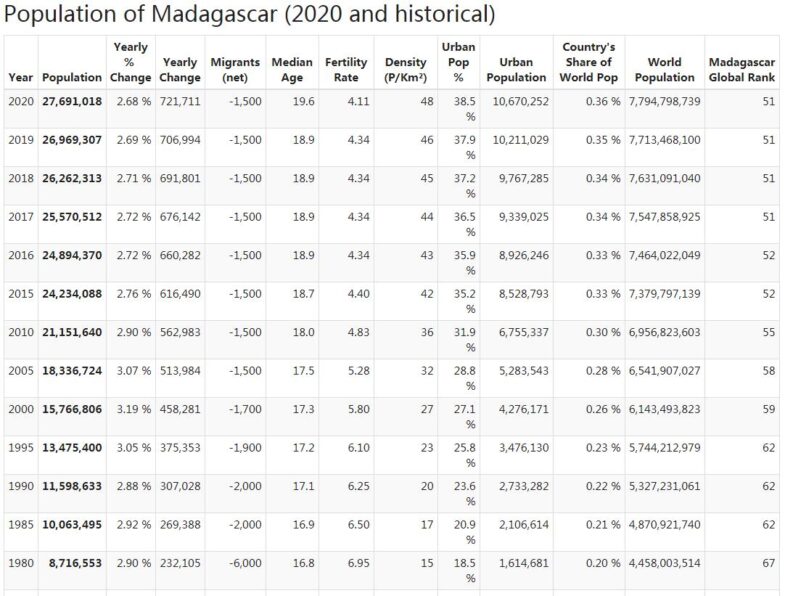 Forced labor is prohibited by law, but it appears that children and women work in, for example, the households of others under slave-like conditions. It also happens that prisoners are used as labor in private companies. Child labor is relatively common.

The presidential election goes to a new round

When the votes are counted, the Election Commission announces that Rajoelina received 39.2 percent of the vote while Ravalomanana won 35.3 percent. Seated President Rajaonarimampianina comes in third with 8.8 percent. His attempt to change the electoral law close to Election Day is believed to have struck back at him. As no candidate received more than 50 percent, a second and decisive round of elections will be held between Rajoelina and Ravalomanana on December 19. The losing Rajaonarimampianina claims that the electoral process was riddled with irregularities, including voter length issues and technical problems. Election observers from the EU refute this and say that minor irregularities have occurred but that these do not affect the election result. The turnout is 54 percent.

The election campaign for the presidential election on November 7 will begin. Among the 36 candidates for the post are Rajaonarimampianina, Ravolamanana and Rajoelina. The period before Election Day becomes relatively calm and peaceful. There are reports of widespread voting.

The president resigns before the election

The Rajaonari Champions are running for president

Now incumbent President Hery Rajaonarimampianina also confirms that he will take part in the November 7 presidential election. Candidates also join Marc Ravalomanana, who was the country’s president between 2002 and 2009. On August 21, the Constitutional Court announces that 46 politicians have announced their interest in running for president.

Rajoelina is running for president

Former president and coup maker Andry Rajoelina, who is now opposition leader, announces that he is running for office in the November 7 presidential election.

Presidential elections will be held in November

Prime Minister Ntsay announces that presidential elections will be held on November 7, 2018. If a second round of elections becomes necessary, it will be conducted on December 19.

President Rajaonarimampianina announces that a new government has been formed under the leadership of Prime Minister Ntsay. Twelve out of 30 ministerial posts go to the opposition, whose supporters, however, are unhappy with the fact that many old ministers are allowed to remain.

President Rajaonarimampianina appoints Christian Ntsay as new prime minister after “holding talks with all political movements”. Ntsay is not a member of any party, but works for the International Labor Organization ILO. Representatives of the opposition party TIM, however, are not satisfied with the election of the prime minister or how the election was conducted. Earlier that week, the opposition criticized the president for saying no to their proposal for a new prime minister. Defense Minister Béni Rasolofonirina also said that the security forces should intervene to “prevent a disaster” if the parties cannot resolve the emergency crisis before the deadline set by the Supreme Constitutional Court has expired.

Prime Minister Solonandrasana Olivier Mahafaly resigns as a result of the recent social unrest and since the Supreme Constitutional Court in May asked President Hery Rajaonarimampianina to dissolve the government.

HMV opens negotiations with the opposition

The Supreme Constitutional Court (HCC) intervenes in the growing political turmoil when it states that parts of the new electoral law that formed the basis of the unrest are contrary to the constitution and should be withdrawn. These include, among other things, the length of the electoral movement, the revision of the electoral lengths and the conditions for running for office.

Warning from the army and police

When government-critical protests have been going on in Antananarivo for twelve days, the Minister of Defense makes a public statement in which he appeals to the various political camps to agree on a solution to the situation. He urges the protesters to leave the streets and not be exploited by the politicians. His statement is signed by both the army chief and the national police chief. President Rajaonarimampianina refuses to bow to the opposition’s demands for his departure. The opposition accuses the government of introducing new electoral laws that are detrimental to the opposition in the upcoming elections, which are expected to be held in autumn 2018.

Hundreds of opposition supporters gather again in the square in front of the Antananarivo City Hall to protest the new electoral laws and demand the resignation of the government.

Soldiers strike a ring around the square in Antananarivo where protesters gathered to protest against new electoral laws (see April 2018). The square is then vacated. President Rajaonarimampianina calls the unauthorized demonstration “a coup” and warns that new similar measures will have consequences.

Thousands of opposition supporters gather in a square outside the city hall in Antananarivo to demonstrate against new electoral laws that they believe may exclude some candidates from the elections at the end of the year. Requirements for President Rajaonarimampianina’s departure are also heard. On the second day of the demonstration (21/4), two people are killed and 16 injured when the police clash with the protesters. The protesters do not have permission from the authorities. Behind the protests are the two presidents Ravalomananas and Rajoelina’s political camps. Both have announced that they are running for election, while President Rajaonarimampianina has not yet announced.