Unemployment is notoriously high in Northern Macedonia and represents a major societal problem, although it has declined in recent years. Many residents, not least women, are completely outside the labor market.

The proportion of unemployed persons has fallen sharply from the highest level of 37 percent in 2005, but is still above 20 percent. It is one of the highest figures in Europe. The hidden unemployment rate is also high. At the same time, the official figures are somewhat misleading, as many work in the informal sector.

Women make up only about 40 percent of the workforce and despite the fact that there is an equal pay law for equal work, their wages are only about three-quarters of men’s. More women than men are unemployed, especially long-term unemployed.

Youth unemployment has also fallen, from previously close to half to about 28 percent. Many young people still leave abroad in search of work.

In order to make the labor market more attractive to entrepreneurs, employees’ rights have been impaired, for example through changes in employment protection and unemployment insurance, and labor protection legislation is inadequate. Workers in the informal sector lack complete legal protection. Services, especially in the public sector, are often added to “right” political opinion rather than to how qualified a person is for the job. 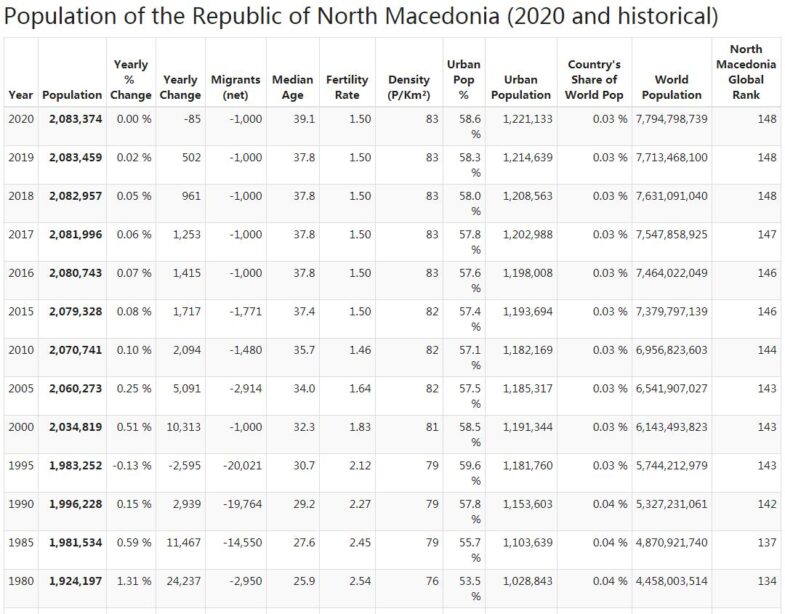 The largest national organization is the Federation of Macedonian Trade Unions (SSM), which is the heir to the former Communist trade union movement but calls itself politically unbound.

Almost one third of the employees are members of any trade union. However, the trade union is not very influential and the social partners often lack confidence in each other.

At an extra convening meeting, the opposition party, the Macedonian nationalist VMRO-DPMNE, appoints Hristijan Mickoski as new party leader after Nikola Gruevski resigned (see December 10). Mickoski, an engineer and the party’s secretary general, receives 376 of 428 possible votes; many delegates are absent, as they are afraid that Mickoski will only join Gruevski’s ligaments.

Following a setback for the Macedonian nationalist VMRO-DPMNE in both the 2016 parliamentary elections and the municipal elections in October 2017, Nikola Gruevski submits his resignation application as party leader. Gruevski, who has led the party for more than ten years, is waiting to be brought to justice for, among other things, illegal interception and other abuse of power during his long term as prime minister.

Police arrest former Interior Minister Mitko Cavkov and several MPs belonging to the opposition party VMRO-DPMNE, as a result of the unrest when Parliament stormed (see April 2017). They are charged with serious crimes against the state. According to a press release, a total of 36 people are being investigated by a prosecutor responsible for organized crime and corruption.

Success for SDSM in local elections

After the second round of local elections, it is clear that the Social Democratic Government Party SDSM has won a grand victory and gained control of 57 of the 81 municipalities, including the capital Skopje. The opposition with VMRO-DPMNE at the headline declares that it will not approve the election result because election fraud has occurred. Independent election observers, however, say that no serious irregularities have been seen. VMRO-DPMNE takes home only five municipalities.

On a visit to Skopje, Bulgarian Prime Minister Bojko Borissov and his Macedonian counterpart Zoran Zaev write under a historic friendship agreement in order to put old contradictions behind them (see Modern history). Now, for example, the countries will facilitate trade with each other through simpler border formalities and Bulgaria promises to support Macedonia’s attempt to become a member of NATO and the EU.

The Court of Appeal refuses a request from the Special Corruption Court, SJO, to hold the opposition leader, former Prime Minister Nikola Gruevski, and several of his close associates and ministers in prison awaiting trial, but their passports are being seized. According to the SJO, there was a risk that the accused would try to influence witnesses or leave the country. Gruevski is charged with three counts: criminal mischief, misuse of state funds and election fraud 2014.

New talks with Greece on the name issue

Negotiations with Greece on the name Macedonia resume. The new government is keen to resolve the conflict over the name that has been going on since independence in 1991. Greece opposes the neighboring country calling itself Macedonia, which is also the name of a province in northern Greece. As long as the conflict remains unsolved, Greece has blocked Macedonia’s ability to join NATO and the EU. The government now claims to be ready to compromise on the name issue.

Nearly six months after the December 11, 2016 elections, the Macedonian Parliament approves a new government. This, which consists of 17 ministers and led by Socialist Democrats Zoran Zaev, includes in addition to his party SDSM two Albanian parties: BDI, which gets six ministers and the Alliance for Albanians who get two. The second largest Albanian party, the Besa Movement, has chosen to stand outside the government but says it can support it on certain issues. According to Zaev, the new government’s primary task will be to promote the economy and the legal community, and to integrate Macedonia into the EU and NATO. He also promises zero tolerance when it comes to corruption.

Zaev gets the assignment to form government

More than five months after the parliamentary election, SDP leader Zoran Zaev is commissioned by President Gjorge Ivanov to try to form a new government. This is done after pressure from, among others, the US and then Zaev guaranteed that his government will keep Macedonia together.

After hindering the election of a new president through so-called filibuster (“long talk”) in Parliament, the members of VMRO-DPMNE are forced to agree that the ethnic Alban, Talat Xhaferi, is appointed new president. Shortly thereafter, Parliament is stormed by supporters of VMRO-DPMNE, without the police intervening. Hundreds of people are injured, including Zoran Zaev and a dozen others from the new Social Democratic-led majority. The intention is believed to have been to provoke a large-scale violence, which would lead to the introduction of martial law and to stop the shift of power. Instead, after the international pressure, the party is forced to distance itself from the storm.

Only for more than three months after the new election does the new parliament meet for the first time. The SDSM, which together with three Albanian parties has a majority in the parliament, hopes that it will be possible to quickly elect the president and then also be able to appoint government despite the president’s opposition. However, the VMRO-DPMNE delegates are launching a filibuster (“long talk”) to stop voting for a new president as long as possible. SDSM has presented the former Minister of Defense, Talat Xaferi of BDI, as his candidate, a choice that VMRO-DPMNE wants to prevent, as well as an SDSM-led government. The outgoing President is from VMRO-DPMNE and does nothing to stop the filibuster, which may last for several days.

The EU is pushing for a new government

On a visit to Skopje, EU Enlargement Commissioner Johannes Hahn meets Macedonian politicians and urges them to form a new government as soon as possible in accordance with the constitution. However, President Ivanov, who does not want SDSM to form a government with several Albanian parties, cancels his meeting with Hahn, whose visit is during extensive demonstrations by ethnic Macedonians against such a government and against the EU.

Majority for SDSM – but still no government

After the SDSM leader Zoran Zaev agreed with the three Albanian parties BDI, Besa and the Alliance for Albanians and thus gained a majority in the newly elected parliament, he demands to form a government. However, President Ivanov rejects his request, citing Albanian demands to break up Macedonia as a state.

Former Prime Minister Nikola Gruevski, whose party VMRO-DPMNE became the biggest in the election, is commissioned by President Ivanov to form government. After 20 days he is forced to give up since the party’s former partner, the Albanian BDI, refused no.