The extensive banking sector employs just over one in ten working in Luxembourg, while the entire service sector accounts for two out of three jobs. Nearly half of the workforce commutes from a neighboring country.

Unemployment has generally been low. However, during the early 2000s, it increased and was no longer the lowest in the EU. The financial crisis of 2008 worsened the situation.

The employment rate is comparatively low; less than half of women are out in the labor market. A large proportion of the workforce lives in neighboring France, Germany and Belgium. The number of border commuters has risen sharply in recent years, and in the fall of 2019 was 43 percent of the workforce. 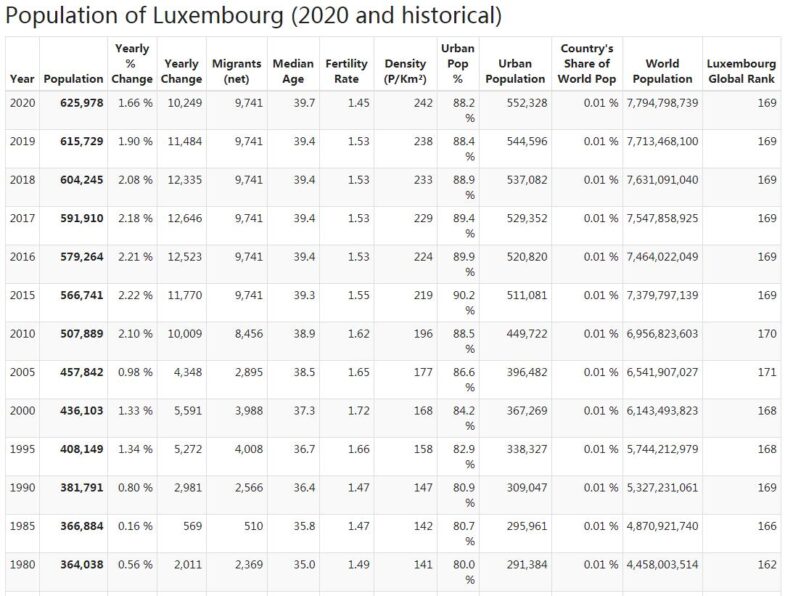 About one in three employees are unionized.

Luxembourg is one of seven countries that, in conjunction with a UN summit on the refugee crisis in the world, promise to take in at least ten times more refugees than in 2015.

Foreign Minister Jean Asselborn said in an interview with a German newspaper that Hungary should be suspended from the EU because of crimes against democratic core values, as the country treats refugees as “animals”. Hungary would not currently have a chance to become a member of the Union, says Asselborn, who also advocates amendments to EU agreements to make it easier for members to be suspended.

Judgments are issued following a trial in April-May against three Frenchmen accused of having leaked the thousands of documents that revealed Luxembourg’s involvement in tax planning (see November 2014). Antoine Deltour and Raphaël Halet, former employees of the audit and consultancy giant PWC, receive 12 and nine months’ imprisonment conditional, while journalist Edouard Perrin is released completely. The judge emphasizes that the respondents acted as whistleblowers and thus contributed to “increased transparency” in tax matters.

Luxembourg offers France money to finance the closure of an outdated French nuclear power plant near the border between the two countries. Prime Minister Bettel said during a visit by French colleague Manuel Valls that an accident at the Cattenom plant could wipe out the whole of Luxembourg.