Everyday life in Benin’s larger cities is very different from life in the countryside. Supermarkets, doctors and schools with western standards can be found in Cotonou as well as traffic chaos and higher crime. In the country it is more leisurely, but also less comfortable.

According to internetsailors, the Republic of Benin is located on the Gulf of Guinea (Bay of Benin) on the West African Atlantic coast. The country extends from the coast up to 675 km to the north. This elongated shape is the result of the colonial demarcation that took no account of natural or economic areas or ethnic settlement areas. In the southern half, Benin is just 125 km wide, expands mushroom-shaped in the north to a width of 325 km and borders there on the countries Niger and Burkina Faso. To the east is its large neighbor Nigeria and to the west is Togo. With an area of 112,622 km², Benin is about the same size as the new federal states of Germany and thus takes up about a third of the area of Germany. In the world ranking by size, Benin ranks 100th out of 196 and ranks 41st of the 54 independent states in Africa. According to a census in May 2013, Benin had 9,983,000 residents. For 2018 the population is estimated at 11.6 million people.

The country is ruled in two cities. Firstly in the nominal capital of Porto Novo, where the National Assembly (Parliament), the Supreme Court and the Ministry of Primary and Secondary Education are located, and secondly in Cotonou, the economic and political capital where the seat of government is located, most of them Ministries, the port, which is important for the economy, and most banks and companies are located. In 2002, the central power structures introduced during the French colonization were broken down. Decentralization is considered to be one of the most important political restructurings in the recent past.

From the hut to the extra class villa, there is a very wide range of housing offers in Benin. Many foreigners who belong to larger organizations have homes provided by their employers or help with finding them. Property prices in Cotonou are high and constantly rising. Speculation and legal uncertainty are the order of the day, plots of land are often sold multiple times and lawsuits arise. If you want to buy a property, you should therefore proceed very carefully. There are numerous brokers in Cotonou and other major cities. The amount of the broker’s commission generally corresponds to 1-2 rents.

There are many options for shopping in Cotonou. Several supermarkets, restaurants and shops meet European standards. The supply is also good in Parakou and Porto Novo. Most of the other cities also have a smaller supermarket or boutique, often run by Lebanese. You can also buy all kinds of products in the country’s many markets. One of the largest markets in West Africa is in Cotonou, the Marché de Danktokpa. Many of the markets are held every four days, which is the traditional Fon and Yoruba calendar.

A business directory, “Cotonou Zoom – Le Guide des activités socio-économique” is available as a print edition. The addresses of doctors, banks, supermarkets and other services and shops can be easily found with the help of the city maps in the appendix. 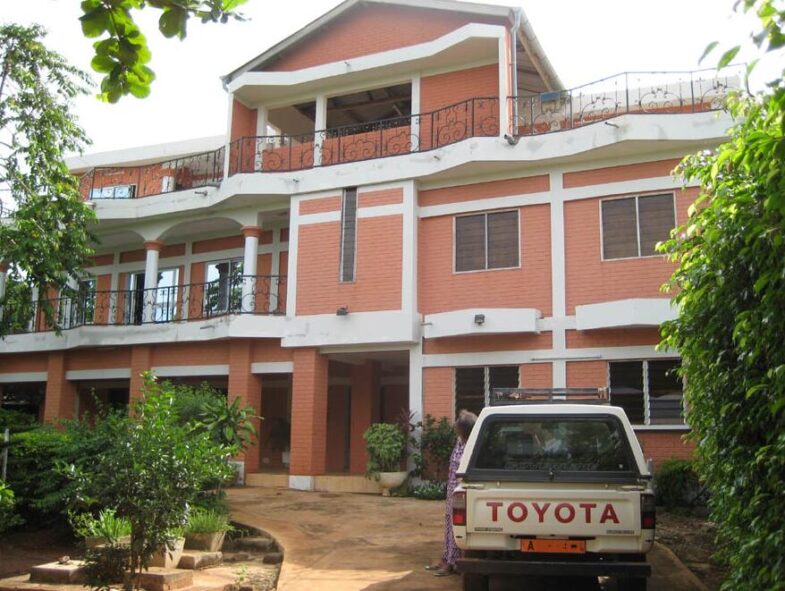 Sport plays a major role for many Beniners. The number one discipline is soccer, but other ball sports, karate, bodybuilding and running are also popular. Benin qualified for the 2019 Africa Cup, the football team was welcomed by President Patrice Talon.

Traditional wrestling plays a role in the Atakora. Six athletes qualified for the 2016 Summer Olympics in Brazil. At national level, Benin has an umbrella organization for athletes (Fédération Béninoise d’Athlétisme – FBA), which is also represented at the departmental level. Benin organized a women’s soccer championship from the end of February 2019.

The Beninese national football team is, or was, always called ” the squirrels” (les écureuils). Since the sporting success has so far remained manageable, the responsible sports minister ordered in autumn 2008 to equip the team with a new heraldic animal that could withstand the lion from Cameroon or the elephant from Côte d’Ivoire better than a squirrel. The renaming in “Aspiring Panthers” (Panthères de l’émergence) is controversial in the public. For 2014, the government approved CFA 150 million francs to support the Beninese first and second division football teams. You can find out more about Beninese football on the association’s official website. In January 2019, the Union of West African Football Associations (Union des Fédérations ouest-africaines de football – UFOA) banned Benin from all regional competitions for two years after Benin had previously abandoned an U20 tournament.

The Society for the Promotion of Literature from Africa, Asia and Latin America presents literature by African authors and the Afroport portal provides information nationwide on events relevant to Africa, such as exhibitions, festivals, TV tips, workshops, etc. Many scholars (Prof. Dr. Erdmute Alber from the University of Bayreuth, Prof. Dr. Thomas Bierschenk from the University of Mainz etc…) from Germany did research in Benin for a long time. The photographer and ethnologist Henning Christoph opened a very impressive private vodoo museum in Essen, which will soon be enlarged to 500 square meters elsewhere. This took place in Bonn on October 27, 20181st International Voodoo Festival in Germany. The guest of honor was Professor David Koffi Aza Priest Fâ and National Coordinator of Tofa in Benin.

The Benin Culture Week has been held every year in certain German cities since June 2015. The focus is on theater and music performances as well as exhibitions of photographs and paintings. The entrepreneur and ‘voodoo master’ Alain Maurice Bokpe has his company headquarters in Berlin, while the Germanist and Kafka researcher Christophe Adjassoho has found his home in Vienna. The peace activist Prince von Abomey, Claude Kalume wa Mukadi Dah Vignon, was awarded the ‘Lichtblicke 2012’ award from the city of Munich. The Benin-born dancer and voudou priest Koffi Kôkôtook over a visiting professorship for dance and performance at the Free University of Berlin. The musician Kouakou de Souza lives in Hamburg and is part of the music culture on the Veddel. A Benin is a member of the AFD regional board in Schleswig Holstein.

The author and former project coordinator Lena Blaudez wrote the exciting novel ‘Spiegelreflex. Ada Simon in Cotonou ‘. An example of private development aid is the extraordinary résumé of the German specialist Antoine Hounhoueno.