During periods of high growth, Lithuania has succeeded in attracting foreign companies to the country with a low wage situation and relatively poor working conditions. Trade union influence is weak. High unemployment has been a problem ever since independence in 1991, while the country has a shortage of qualified labor as a result of high emigration among the highly educated.

In the Soviet planning economy, almost all citizens were provided with work. At independence, the old economic structures collapsed and unemployment grew rapidly. Lots of Lithuanians lost their jobs when the big loss-making state-owned companies sold out in the 1990s. Others became unemployed when the oversized state bureaucracy was lost. Unemployment rose further after the Russian financial crisis in 1998 and reached a peak of almost 17 percent three years later.

In connection with Lithuania’s rapid economic development a few years after the turn of the millennium, the share of unemployed fell. In 2007, unemployment was below 4 percent. A contributing reason for this was that many Lithuanians emigrated after the country’s EU entry in 2004 to look for jobs in the UK and Ireland, mainly. During the financial crisis of 2008–2009, unemployment rose again rapidly in 2010 to reach a record level of almost 18 percent. Since then, the share of unemployed has been on the decline.

In terms of employment rate, the regional differences are large. In some parts of the country, unemployment has at times been several times as high as in Vilnius.

About two-thirds of the labor force is found in the service sector, while agriculture employs one-tenth of the employees and the industry a quarter.

During the Soviet era (1944–1991), membership in the regime-controlled trade unions was mandatory. Nowadays, the union connection is low (below 10 percent). The Social Democratic-oriented trade union organization LPSK has the most members, followed by the Christian Democrat colored LDF. 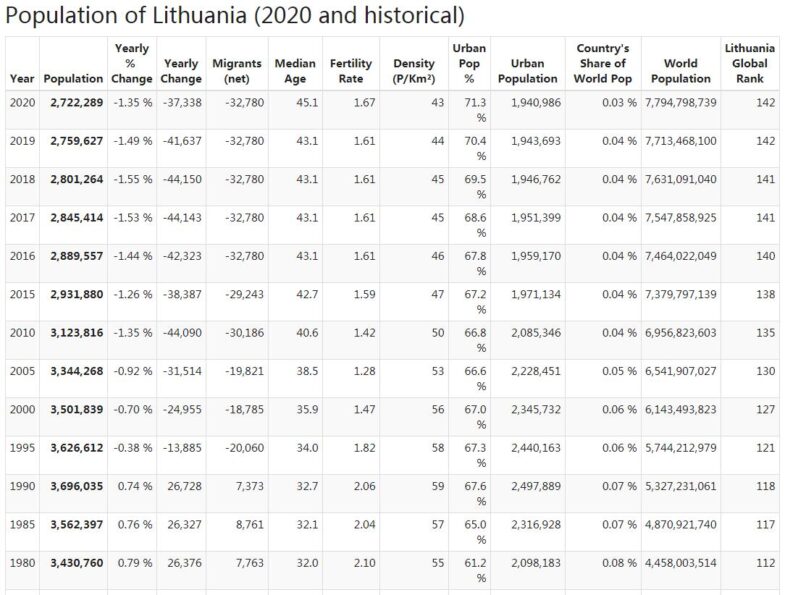 In 2014, Lithuania had the highest proportion of low-income earners in the EU. That year, every fourth employee earned EUR 332 or less a month. The situation improved slightly when the minimum wage was raised to 380 euros in July 2016. The lowest is agricultural wages, while the highest wages are paid in the financial world and the energy sector. Wage levels are significantly higher in the largest cities than in rural areas, while the gender pay gap is among the lowest in the EU. Some analysts warn that a higher wage situation risks weakening Lithuania’s competitiveness in the international market.

The widespread emigration and falling birth rates pose a major problem for the labor market as the workforce is constantly shrinking, especially for high-education Lithuanians who find better-paying jobs in countries such as the UK and Ireland.

The new coalition government led by Skvernelis formally takes office after winning a clear victory in a vote of confidence in Parliament. Social Democrat Linas Linkevičius retains the post of Foreign Minister. He has a clearly critical attitude towards Russian policy towards the Baltic States. Skvernelis represents the alliance of Lithuanian farmers and the Greens but is not a formal member of the party. Several other new ministers are also outside party politics.

The incoming Prime Minister Skvernelis promises that his government will increase defense spending on NATO’s demand of 2 percent of GDP by 2018. Currently, the figure is 1.5 percent.

Ramūnas Karbauskis, leader of the Alliance of Lithuanian Peasants and Greens, surprisingly announces that the party has agreed with the Social Democrats to form government. Prime Minister becomes Saulius Skvernelis, the former national police chief who became popular through a tough attitude against corruption. Karbauskis himself is a billionaire and owns large land and agricultural industries in the agricultural sector.

The government is introducing a special telephone number to which citizens can report any persons they suspect to spy on behalf of foreign powers, in practice Russia. The “hot line” is one of several elements of a campaign to warn citizens of the risk of being exploited by foreign spies.

Victory for the alliance of Lithuanian peasants and the Greens

After the second round, it is clear that the small middle party Lithuanian peasant and green alliance (LVŽS) has won a sensationally big victory. LVŽS, which received a single mandate in the 2012 election, now gets 54 seats. The Confederation of Finland-Lithuanian Christian Democrats becomes second largest with 31 seats, while the Social Democrats lose more than half of their seats and stay on 17 seats. The Labor Party becomes the second major loser and backs from 29 seats to 2.

The biggest choice for the economy

The first round of the parliamentary elections is conducted. Unemployment and economic inequality have been the main issues during the election movement.

Lithuania has delivered 150 tons of ammunition to the Ukrainian army. Defense Minister Olekas says it is the duty of the country to help “a faithful friend who was attacked by Russia”.

In the wake of the refugee crisis in Europe, Lithuania is allocated 1,105 refugees in accordance with an EU agreement on the distribution of refugees between member states. The quota splits the government as the Social Democrats think the country is capable of receiving this number, while the other two government parties are hesitant. The debate rings off when the president leaves and says that Lithuania is able to receive its allocated refugee quota.

Lithuania signs the contract for the country’s largest purchase of military equipment to date, 88 boxer cars of the Boxer model worth € 386 million. The vehicles will be delivered between 2017 and 2021 and manufactured by the German-Dutch company Artec. Since Russia annexed Crimea in 2014, Lithuania has increased its defense budget by a third a year.

NATO soldiers to the Baltic

NATO decides to station a battalion of up to 1,000 soldiers in each of the three Baltic countries Estonia, Latvia and Lithuania. The soldiers will mainly come from the UK, Germany and Canada and serve in the three countries according to a rotating schedule.

German Chancellor Angela Merkel confirms media reports that Germany is considering sending troops to Lithuania as part of NATO’s defense alliance’s commitment to increased presence in Eastern Europe. The news is welcomed by the Government of Lithuania.

The government bans 46 Russian judges, prosecutors, judicial investigators and other officials from entering Lithuania for the next ten years. Everyone is held accountable for a Ukrainian fighter pilot sentenced to 22 years in prison in Russia for alleged murder of two Russian journalists in eastern Ukraine in 2014.

For the first time, direct mayoral elections are held. They are carried out at the same time as the municipal council elections.

Trial of the shooting deaths in Vilnius in 1991 begins

A trial is initiated in Vilnius against 65 people charged with war crimes and crimes against humanity in connection with the killing of 14 Lithuanian protesters by Soviet soldiers during the storming of the TV tower in Vilnius in January 1991 (see Modern History). The defendants were active at the time in the Soviet Communist Party, in the Ministry of Defense and Home Affairs, the KGB security service and in the Red Army. They are being charged with the ultimate responsibility for the death of the 14 civilians. The defendants are Russian, Belarusian and Ukrainian citizens. Only two defendants are present in the courtroom. The others are abroad and represented by their lawyers.