Liberia’s traditionally close relationship with the United States has characterized foreign policy in the country ever since the country’s origins in the 19th century. The United States expanded its military presence in Liberia during World War II, and during the Cold War, Liberia was the most important listening post in Africa in Africa, including an Omega satellite station. The United States also expanded Robert’s International Airport into one of Africa’s largest and busiest. This was used, among other things, during the transport of weapons to the Angolan rebel movement UNITA.

Under President Samuel Doe (1980–1989), the United States increased its support for Liberia, and in 1982 the country received more US aid per capita than any other African state. The United States also endorsed the election results in 1985, which were obviously based on cheating. The killing of Doe in 1990 and the subsequent civil war weakened US relations with Liberia, but the country was still a player in the conflict, and Liberia had expectations that the United States would intervene militarily to restore order. This did not happen, but the United States supported Nigeria in its efforts to establish and deploy ECOWAS peacekeepers.

Following the end of the civil war in 2003, the United States has become Liberia’s foremost aid recipient, and the special historical relationship was highlighted by the inclusion of President George W. Bush in its Africa journey in 2008. China has included Liberia in its efforts to develop a political and economic foothold in Africa, and President Hu Jintao visited the country in 2007. Norway has also supported Liberia’s reconstruction; Development Minister Erik Solheim visited the country in 2007. 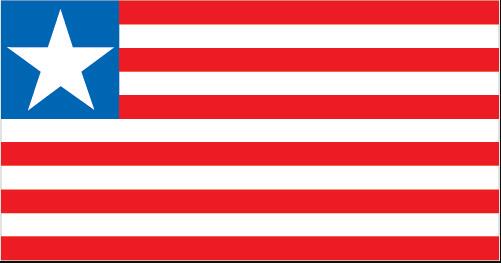 Liberia’s economic and political stability was threatened in 2014 by the Ebola epidemic that originated in Guinea in 2013 and affected Liberia in 2014–2016.

Liberia’s flag has 11 equally wide horizontal stripes, six reds and five whites in alternating order. On a blue square in the upper left corner of the pole a white, five-tailed star. The flag was officially assumed in 1847.

The weapon shows a rising sun against blue sky over a green coastal landscape, in the foreground a shovel and plow at the foot of a palm tree. On the sea outside a wooden mast under sail, above the ship a dove with a fly leaf in the claws. Under the shield a text ribbon with the state name Republic of Liberia, above the shield a text ribbon with the motto The Love of Liberty Brought Us Here (“The love of freedom brought us here”).