Most of the inhabitants ended up outside the modern economy during the civil war. A labor force survey in 2010 estimated unemployment in the formal labor market to be 3.7 percent (higher in cities and among young people), but it should be borne in mind that there are few jobs outside the small state sector. When the new government took office in 2006 after the wars, the number of government employees was reported to be close to 70,000. Major cuts were announced to streamline the administration, but have not been fully implemented.

According to data from the World Bank, the Ebola epidemic 2014–2015 has also had serious consequences for the labor market, as, for example, trade has ceased in many markets. The majority of the 20,000 people who worked to fight the epidemic are now reported to have difficulty finding new jobs, largely because people are still afraid of being infected, but also because many look down on those who have dealt with the dead. (to avoid the spread of infection, those who have died should be cremated, which is not compatible with the country’s traditions of burials).

The largest private employer, Bridgestone / Firestone, was estimated to officially have around 8,000 employees in 2014. The company was accused in the early 2000s of keeping staff under almost slave-like conditions by demanding so high production quotas that even children were forced to work. In 2008, however, the trade union succeeded in establishing a new agreement which meant higher wages, better conditions and benefits. In 2010, a large part of the heaviest work was mechanized and at the same time, child labor was banned. In 2015, the union also won a tough fight for better conditions against the big Chinese mining company China Union. 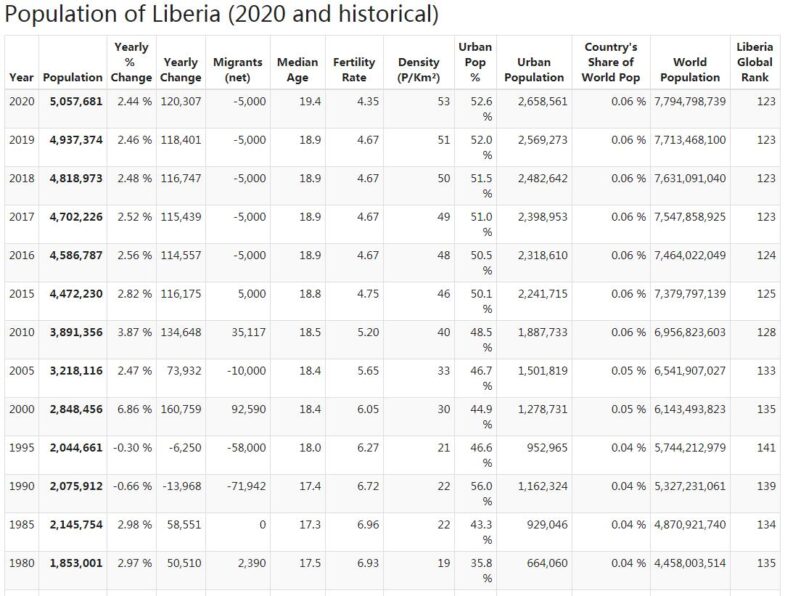 A large number of Liberians are referred to trying to support themselves in the so-called informal sector. Small scale farming for own needs has also started in the countryside.

Two trade union organizations joined the Liberia Labor Congress in 2008, which has about 42,000 members. The Farmers’ Union is the best organized and most active trade union in Liberia. Government employees are not entitled to collective agreements; however, there are such at some private companies. Strikes occur and child labor is common.

A new case of Ebola is reported when a 15-year-old boy dies of the disease at the end of the month.

For the second time, Liberia is said to be free from Ebola, as no new cases have been reported in 42 days (see May 2015).

The state oil company Nocal is laying off 200 employees, both managers and other staff. Falling prices for oil and gas have created problems for the oil sector, which is still relatively small in Liberia, but which has nevertheless provided important income. Large companies such as Anadarko and Chevron are also located in the country and have started drilling for offshore oil.

Two more people fall ill with Ebola at the beginning of the month. In the middle of July, the second death is reported since the illness returned. Since the end of June, six infected have been found, including one case in Monrovia. The four survivors who are ill can all leave the hospital after they have recovered.

A new case of Ebola is discovered at the end of the month: a 17-year-old boy who died in the town of Nedowein, about five miles from Monrovia.

No new Ebola cases since March

The epidemic in Liberia is considered over, as no new cases have been reported since March. Most of the 20,000 people who have worked to fight the epidemic are now reported to have difficulty finding new jobs, largely because people are still afraid of being infected.

The dissatisfaction is that the government has not paid out the risk supplements that have been promised.

Charles Taylor is denied the rest of his sentence in Rwanda

Charles Taylor is denied the rest of his sentence in Rwanda (see September 2013).

Setback in the fight against Ebola

On March 5, the last Ebola patient is discharged from a treatment center in Monrovia. Then a week has passed without any new cases being reported. However, a setback comes two weeks later when a woman falls ill in Ebola in Monrovia.

Reports indicate that violence against women has increased in the wake of the Ebola epidemic.

At the beginning of the month, it is announced that schools in Liberia will reopen on February 16 after being closed since July.

A treatment center for Ebola in the country’s worst affected area, Lofa County, is closed. According to President Ellen Johnson Sirleaf, no new case of the disease has been found there in 70 days. Lofa, at the border with Guinea, was the area in Liberia that was first and foremost affected by the spread of infection. According to the president, 13 of the country’s 15 counties have had no new case in 21 days, the estimated incubation period for the infection.

WHO admits that it has not acted quickly enough to prevent the spread of Ebola.

An initial shipment of an experimental Ebola vaccine reaches Liberia. It is hoped that the first tests will start in February.