A large proportion of the population devotes themselves to agriculture and livestock management for housing needs. It is common for children, especially boys, to help in agriculture, for example by raising livestock. Around a third of those with employment also work in the agricultural sector.

Unemployment is high. Many people are trying to support themselves in the informal sector of the economy, which mainly covers different kinds of small services in the cities. Poor families often send their girls to the cities, where they work as maids or are forced to prostitute themselves.

During the first decade of the 2000s, tens of thousands of Lesothians were employed in newly opened textile factories (see Industry). High unemployment means that wages can be kept down.

The mining industry in South Africa has long been using Lesotho workers, who have sent home money to their families and thus contributed to the entire country’s livelihood. But when, above all, the gold price went down, the mines started cutting staff. In the mid-1990s, 110,000 Lesothians worked in South African mines, but the number was halved in a decade and is now down to around 40,000.

Many Lesothians also work as maids in South Africa. 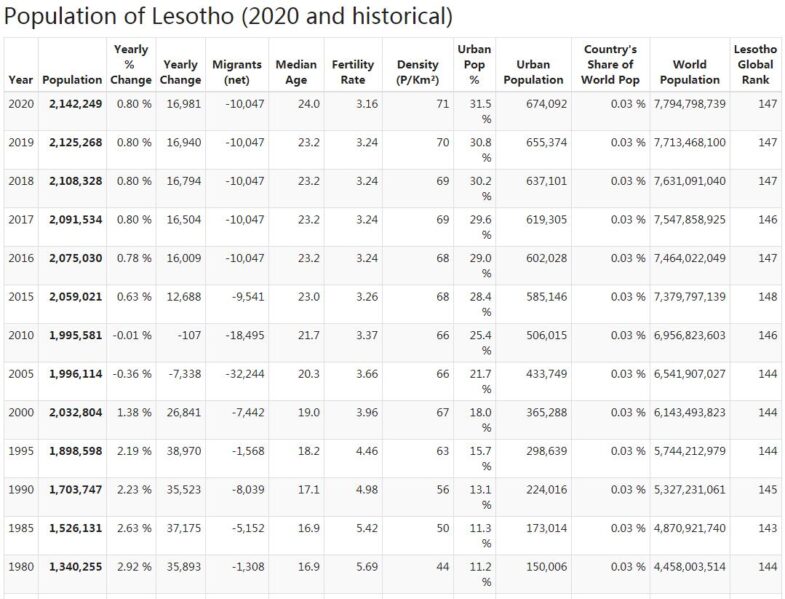 Employees have the right to organize trade unions, but the right to strike is limited and civil servants may not belong to any trade union. Trade union rights are regularly violated and trade union activists risk being harassed. The trade union movement is weak; only one in ten employees is organized. Among the many Lesothian miners in South Africa, the unions in the large neighboring country are more important.

The opposition, with the Allbasothic Convention (ABC) at the forefront, is calling for mass demonstrations in the autumn against the election result, but the protest actions are waning a few months later due to weak support.

Five people are being charged with treason, suspected of taking part in the assaults against opposition leader Thomas Thabane and several ministers.

The government issues a state of emergency because Lesotho has been hit by the worst drought in three decades, with growing and food shortages as a result.

Curfews are introduced at night in the capital Maseru after a series of ministers and leader of the opposition party ABC, Thomas Thabane, have been subjected to assaults and attempted murder. The ban is lifted after one week.

Prime Minister Pakalitha Mosisili forms a new government after the election and begins his third term as head of government.

The ruling Lestoho Congress for Democracy (LCD) wins the new election to Parliament by a wide margin, and thus remains the country’s by far the largest party and most important political force. LCD’s election promises have included increased pensions and increased free schooling. The party receives 62 of the 120 seats. The National Independent Party (NIP), which has allied with the LCD before the elections, wins 21 seats and becomes the next largest party in Parliament. In third place, with 17 seats, comes the newly formed Allbasothian Convention (ABC), which thus becomes the largest opposition party. In most constituencies, turnout is lower than 50 percent. LCD gets the most votes in rural areas, while ABC is strongest in cities. ABC and other opposition parties refuse to accept the election result and accuse the LCD of electoral fraud. They also criticize LCD’s and NIP’s: s electoral cooperation, which they believe gives the alliance more seats in parliament than it should have. The opposition submits a protest against the election results to a court and announces a general strike for three days in protest over how the mandate was distributed. However, regional and international observers describe the election as free and fair.