Most employees work in the service sector, including trade, tourism and construction. Only about one percent of the labor force is employed in agriculture.

Employees have the right to organize unions and strike with the exception of those who are government employees. There are around 100 trade unions, of which the Lebanese general labor union, CGTL in French abbreviation, is the largest with about 200,000 members. Fenasol, which is interpreted Fédération des Syndicats des Ouvrier et Employés au Liban, is a land organization related to the CCP formed by budding from the CGTL 2012. Fragmentation within the union movement reflects the religious, and social breakdown prevailing in society in general (see Political system) and make the trade union movement a relatively weak social actor.

The official unemployment rate is low, but it is an example of the state not knowing everything, especially in a country that has huge refugee crises. The statistics miss both people who have a livelihood, in a gray or black market, and people who do not have jobs but are not registered as job seekers. The World Bank has estimated that about a third of all young people in Lebanon lack jobs. The labor market pressure has increased during the influx of over one million refugees from Syria seeking refuge (see Population and language). Even before the civil war in Syria, there were hundreds of thousands of migrant workers in the country, including many Syrians.

Palestinian refugees are discriminated against in the labor market and are prohibited from working in a number of, more qualified, professions.

About a quarter of a million women, most from Africa or Asia, are employed in Lebanese households. In accordance with a system called kafala, they receive residence permits through their employers and are not subject to the usual labor law rules; The system is also available in a number of other Arab countries. Human rights organizations – which have documented cases where it has led to slave labor, abuse and suicide – urge Lebanon to strengthen the protection of migrant workers. Both Ethiopia and the Philippines have banned their citizens from doing housework in Lebanon, but there are black jobs. 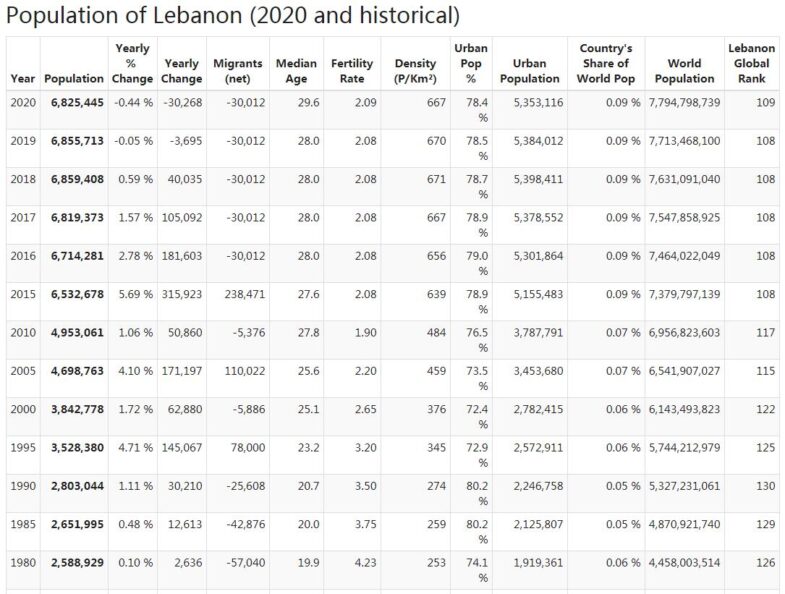 The minimum wage was raised in 2012 to around $ 450 a month. However, the pay for guest workers is usually lower, between $ 100 and $ 300 per month. The national organization Fenasol has demanded that the minimum wage be increased, but also that Lebanese employees be given priority.

In early 2020, after months of a crisis involving, among other things, a lack of foreign currency, guest workers from several countries told news media that they no longer received their salary in dollars but in the Lebanese currency, which had dropped sharply in value. The result was that they could no longer afford to send money to their families in their home country. When the corona pandemic also reached Lebanon, many were left without income. In May, the government announced that evacuation flights for guest workers who wanted to return to their home country would be allowed. Departures planned were for Egyptians, Ethiopians and Filipino workers.

Parliament votes to extend its own mandate again, this time to June 2017.

Many killed after suicide bombings in Beirut

Two simultaneous suicide attacks in Beirut require at least 44 lives and over 180 people are injured. Explosions occur in an area in southern Beirut dominated by the Shiite Hezbollah movement. The Islamic State says it is behind the attacks to avenge Hezbollah’s support for the Syrian regime that IS is fighting in the neighboring civil war.

More violence on the border with Syria

Violence flares up again at the border with Syria when a suicide attack in the border town of Arsal takes at least six people’s lives. The attack is aimed at a local area where Sunni Muslim leaders are meeting to try to bring about a release of Lebanese government soldiers and police who were robbed in August 2014 when Syrian rebels made a raid in Arsal. Later in the month, the Syrian al-Nusra front released 16 of the captured soldiers and police.

The landfill crisis (see August) appears to be resolved as the government agrees to the protesters’ demands and transfers responsibility for the waste disposal to local authorities and decides to establish two new landfills in the country. The dump that closed in July will be reopened for some time.

Extensive demonstrations against the government are breaking out in the capital Beirut in the context of a sweeping crisis. The country’s last dump was closed in July and since then the landfill has grown. The government has refused to enter into new contracts with the sophomores, citing that they are too expensive. Protesters blame the conflict on politicians being paralyzed and corrupt. Prime Minister Salam threatens to step down unless the government resolves the conflict but the ministers cannot agree at a crucial meeting. Six ministers, all allied with Hezbollah, are leaving the meeting.

Hezbollah is fighting IS

Hezbollah leader Hassan Nasrallah states for the first time that the group is also at odds with the Islamic State in Iraq.

Struggles between Israeli troops and Hezbollah

In revenge for five major commanders killed in an Israeli missile attack on the Syrian side of the Golan Heights, Hezbollah attacks an Israeli military vehicle at the disputed Sheba area near the Lebanon-Israel border. Two Israeli soldiers are killed and seven injured. Israel responds with air strikes and artillery targets to targets on the Lebanese side. During the fire, a Spanish UN soldier is also killed. The incident, which is the most serious confrontation between Israel and Hezbollah since the Lebanon war in the summer of 2006 (see Modern History), raises concerns about a new major conflict between the parties.

Five Lebanese soldiers are killed when their army posting in eastern Lebanon is attacked by Syrian rebels.

Nine people are killed when two suicide bombers burst into the air at a cafe in the city of Tripoli. Over 30 people are injured. The attack takes place in a district dominated by Alawites (see February 2012). The Syrian rebel group al-Nusra front says it is behind the suicide bombing as a revenge for the Sunni Muslims killed in the civil war in Lebanon.

IS stated to try to control border area

New rules are introduced to limit the refugee stream from Syria. Previously, Syrians have been able to stay in Lebanon without a permit for up to six months. Now visa enforcement is being introduced. Lebanon has received more than 1.1 million Syrians registered as refugees. In addition, an additional half a million Syrians are estimated to be in the country (see also Population).