Unemployment has been around 10 percent in the 2010s. This is significantly lower than during the financial crisis when it reached a full 21 percent. The decrease has been due to the recovery of the economy but also to an extensive emigration of labor.

More than a third of those who are unemployed have been there for a long time. Among them are many elderly people, who have not received the skills development required to work in a modern market economy. Unemployment varies in different parts of the country, the highest being in Latgale in the east. It is also higher among ethnic Russians than among Letters.

At the same time, experts warn that there may be a shortage of labor in the future. Already today, it is difficult to find personnel for the industry. Relocation and declining birth rates help to increase the proportion of older people and to reduce the working population. According to the organization OECD, the workforce has shrunk by a quarter compared to 2000 and it can shrink by another 20 percent by 2030 according to calculations. Many young academics look for jobs in other EU countries where wages are higher.

The financial crisis led to wage levels being lowered and it took a long time for wages to start rising again. Many women work, but they often have lower wages than men with the same education and skills. The income gap between different groups is among the highest in the EU.

Trade union activity is low. In 2015, less than one-sixth of the employees were union members. Latvia’s free trade union organization LBAS is the largest trade union movement with about 100,000 members. LBAS has about 20 associations. 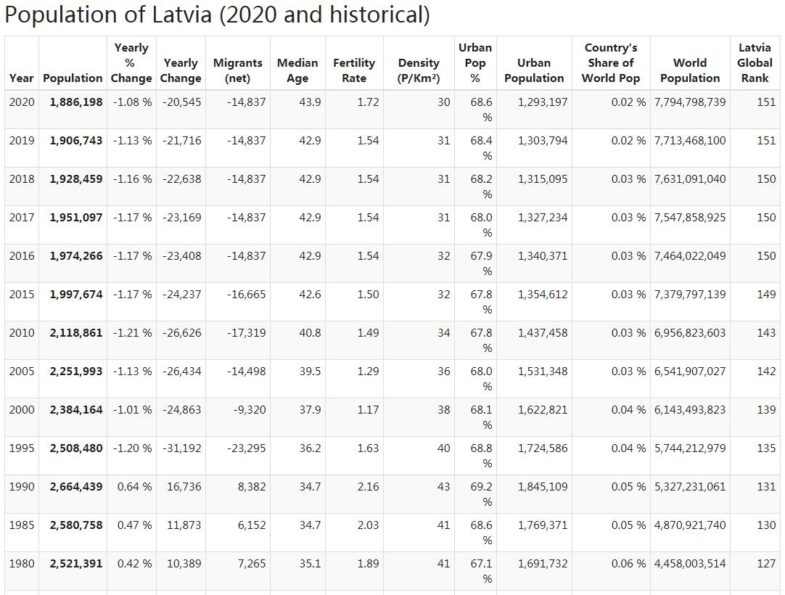 The drought that has hit Latvia’s agricultural sector is the worst in many years. The western parts of the country are the hardest hit and several areas have not received rain since April. Individual farmers have been severely affected. In order to prevent banks from measuring out farmers’ assets because they cannot pay their loans, the government issues a national disaster permit. The government has also asked the European Commission to pay agricultural subsidies in advance.

Former railroad workers are being convicted of espionage for Russia

A court sentenced a man with Russian background to prison for a year and a half. The man who worked at the railroad must have spied on behalf of Russia and provided Moscow with secretly stamped information on NATO troops and equipment transported by train.

Latvia expels a Russian diplomat as a result of a nerve poisoning attack on a Russian former spy and his daughter in the UK in early March. It is taking place in concerted action with some 20 countries, mainly in the EU, in solidarity with the British government accusing Russia of being behind the attack. In total, over 100 Russian diplomats are expelled, 60 of whom are from the United States. Moscow denies all involvement in the poison attack and threatens with countermeasures.

The bank ABLV, which is Latvia’s third largest bank, is selected by the US Treasury Department for involvement in money laundering and banking transactions with links to North Korea’s nuclear weapons program. Shortly thereafter, the European Central Bank freezes ABLV’s payments in foreign currency. The bank’s CEO is also investigated for bribery.

A brand new data service for prescription drugs is subject to a major cyber attack with thousands of drug applications per second from about 20 countries around the world. According to Health Minister Aivars Lapins, the data attack was planned.