In Laos, about 10-15 percent of the workforce has a formal employment, while around 75 percent rely on agriculture for housing needs. Over the past 25 years, more and more Laotians have been given jobs in industry, especially in cities.

Among the Laotians who have formal employment are six out of ten in agriculture, three out of ten in the service sector and others in industry.

Many Laotians go to Thailand to find work, mainly in agriculture, construction or in factories. There, in a couple of months, they can earn more than a full year in their home country, where wages are significantly lower. An estimated 300,000 Laotians work in Thailand.

Under the law, employees formally have many rights, such as a minimum wage and 48 hours of work week. Discrimination based on gender and ethnicity is prohibited, as is forced labor and child labor, but the law is far from being always applied. 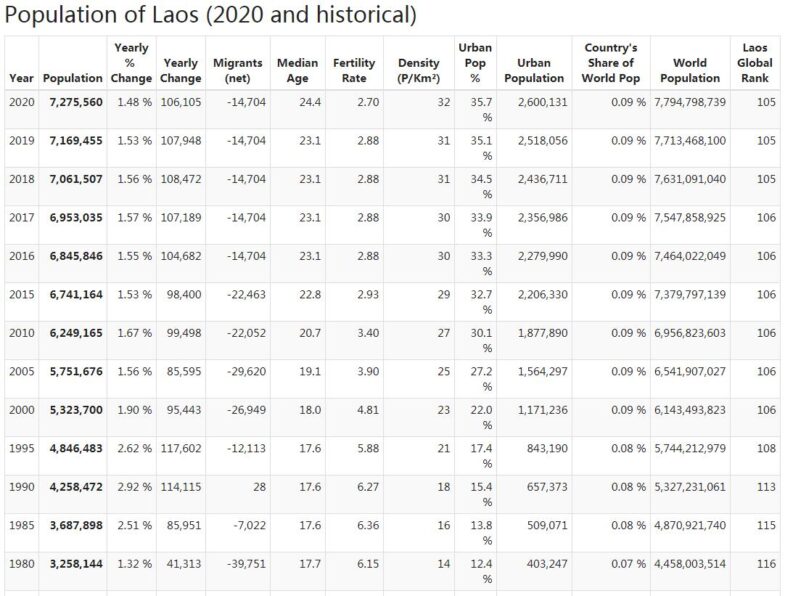 All trade unions are controlled by the ruling Communist Party; no union freedom does not exist. There is a trade union organization divided into several unions. Almost all members are civil servants. Formally, strikes are permitted, but strikers risk imprisonment for engaging in “destabilizing activities”. As a result, strikes are extremely rare.

Women have less access to work than men and their wages are lower, partly because they generally have lower education than men.

The heavily criticized Xayaburi Dam in the Mekong River is officially inaugurated. The hydropower plant is financed by Thailand, which will also buy almost all electricity produced there. Construction of the hydropower plant began in 2012 and immediately received criticism from both locals along the Mekong River and environmental organizations. Since then, data on falling water levels and reduced fish stocks have been received. The day before the inauguration, scary pictures, taken by drones, came about how parts of the Mekong were completely dry. Laos is investing heavily in becoming “Asia’s Battery” and has 44 active power plants in its rivers. Another 50 or so are being built.