Most Kyrgyz feed on agriculture and livestock care for housing needs and are outside the formal labor market. Of the salaried employees, more than half are in the service sector. Unemployment is high and the wage situation is low, especially for rural workers.

Almost a quarter of the formal workforce in Kyrgyzstan is employed in agriculture, forestry and fishing. An equal share is found in industry, mining and construction. More than half work in the service sector, for example with trade and administration. However, many Kyrgyz provide food in the informal economy, which is estimated to correspond to 40-50 percent of GDP.

About 750,000 Kyrgyz work abroad, mainly in Russia and Kazakhstan. Money they send home is important for the country’s economy and for the families in the home country.

All employees have the right to form and join trade unions, which is generally respected by authorities and employers. The proportion of union members is reported to exceed 90 percent.

The largest national organization, the Kyrgyz National Trade Union Central Organization (KNFC), is a reformed version of the trade union organization during the Soviet era (1918–1991). KNFC is formally independent but in practice is under strong state control. 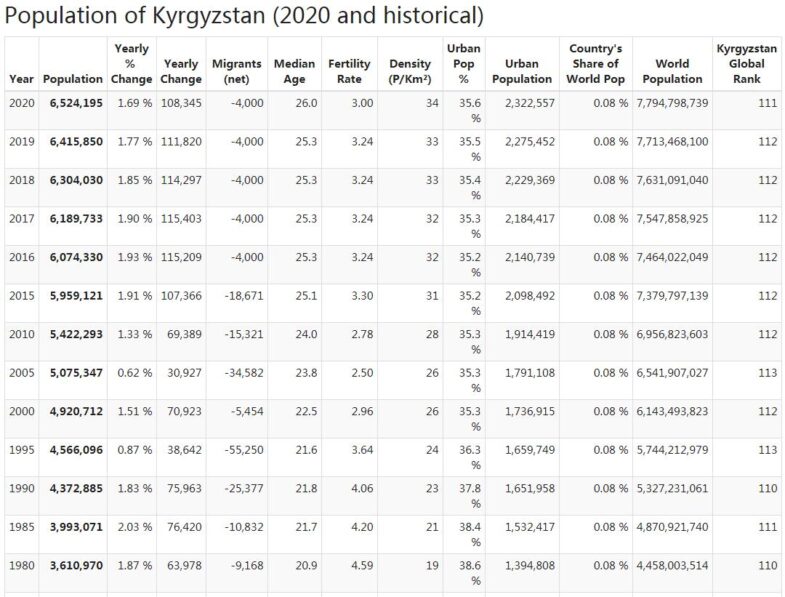 Under the KNFC, about 30 trade unions organize farm workers, teachers, health care workers, industrial workers and public servants among many other occupational groups.

The working conditions and safety conditions are reported to be inadequate in many workplaces, especially in the industry.

The referendum on a number of disputed constitutional amendments is being carried out as planned. According to the Election Commission, about 80 percent of the participants vote to change the constitution in accordance with the package of proposals submitted by the government. However, turnout is only around 42 percent.

A new government is presented. Like the previous government, it is dominated by the Socialist Party and Sooronbai Jeenbekov remains as prime minister. The government also has representatives of the Kyrgyz Party and the Unity.

A referendum on amendments to the constitution will be carried out on December 11. The changes mainly concern increasing the powers of the Prime Minister and the government, which critics regard as a way for President Atambayev to be able to retain power when his time as president expires in 2017. He has so far denied that he should try to be elected prime minister then, but the critics doubt his words. The Venice Commission, the Council of Europe’s expert group on constitutional issues, believes that the proposed changes can damage the balance between the governing bodies and weaken the independence of the judiciary. Local activists also say the changes could weaken Parliament and the rights of individuals.

The president back home

President Atambayev returns from Moscow, where he has been treated for heart problems. He confirms after returning home that he suffered a heart attack.

Atambayev travels to Moscow for care

President Atambayev flies to Moscow to receive care since he suffered from heart problems and has therefore canceled all assignments.

Uzbekistan withdraws the police and border soldiers who have been in the disputed border area of ​​Unkur-Too for a month, says the Kyrgyz border security. The retrial takes place after negotiations between officials from both countries. The four Kyrgyz arrested in August were released and sent home in early September.

Three people are injured when a suicide bomber triggers an explosive charge after driving through the gate to China’s embassy in Bishkek. The injured are Kyrgyz local employees at the embassy. In previous attacks on Chinese interests in Kyrgyzstan, Uighurs from Chinese Xinjiang have been accused of lying behind.

President Atambayev orders the government to review all border agreements with neighboring countries that previous governments have entered into. According to the President, the agreements have been concluded without transparency for Parliament or the public. Lately, there has been tension around disputed parts of the country’s border with Uzbekistan, a stretch of about 30 miles of the 100-mile border. Uzbekistan claims a mountain area called Unkur-Too. Uzbek police have arrested four Kyrgyz who work at radio and TV mast on the mountain.

Parliament unanimously endorses Sooronbai Jeenbekov as new Prime Minister. He is considered to be close to the president and has most recently been his deputy chief of staff. He is nominated by the Social Democratic Party, which dominates the new four-party government. He says his main priority is to fight terrorism and resolve border conflicts with neighboring countries.

Prime Minister Temir Sarijev submits his resignation application after a parliamentary commission accused the government of corruption in connection with a Chinese company being awarded a contract on a road construction worth US $ 100 million. Sariyev denies guilt but says rumors of corruption have nevertheless damaged the government’s stability. President Atambayev has refused to dismiss the Minister of Transport, which Sarijev has proposed.