Kuwaiti citizens work mainly in the public sector, which is heavily over-staffed and inefficient. This means that underemployment is high while official unemployment is low among Kuwaiti people. A large majority of the labor force is made up of foreign migrant workers.

The public sector offers employment and a good monthly salary, although there are no tasks. But the growing population is increasing the number of young Kuwaiti in need of work and the government is therefore trying to get the private sector to hire more Kuwaiti. Private Kuwaiti employees now have the same benefits as civil servants.

A large majority of the labor force in Kuwait is made up of foreign migrant workers, most of them from populous countries in Asia or from poorer Arab countries. They work primarily in the oil sector and other industrial sectors, in construction and in the service sector. These guest workers have significantly worse conditions and fewer rights than Kuwaiti workers. They are prohibited from organizing trade unions (but they have happened to strike). Nor are they allowed to bring their families to Kuwait.

Especially vulnerable are foreign women who work as maids in Kuwaiti families, where they are often ill-treated and not often subjected to sexual abuse. Many guest workers live in slave-like conditions. With the support of a system called Kafala, the employer who pays the guest worker’s visa can seize the passport and hold the salary until the contract expires, which means that an employee cannot leave the country or change work. Several times, guest workers’ conditions have triggered crises between Kuwait and the Philippines. In 2018, an agreement was signed that, among other things, the guest workers would be allowed to keep their passports and telephones, but from the Philippine point of view it is claimed that the agreement is not followed. 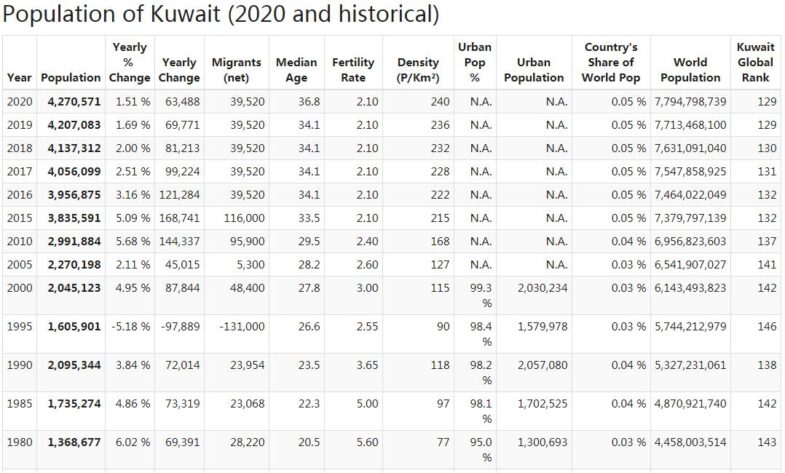 Even for Kuwaiti, the right to do union work is limited. All unions must belong to the umbrella organization Kuwait Trade Union Federation (KTUF), which is under strong state influence. Individuals pay no income tax; on the other hand, since 2008 all companies pay a so-called flat tax of 15 percent on their income.

The Muslim Brotherhood and a number of other opposition groups boycott the new election, and only around 40 percent of voters participate. This is considerably less than in the February elections. Shi’a Muslims increase their number to 17 of the 50 seats in parliament, while Sunni Islamists see their share shrink to four seats. Three women are selected. Two days after the election, the government resigns but the Prime Minister, Jabir Mubarak al-Hamad al-Sabah, is directly commissioned to form a new ministry.

The MP is arrested

A former MP, Musallam al-Barrak, is arrested and accused of undermining the emir’s position. Barrak, in conjunction with demonstrations, gave a speech and warned the emir to take Kuwait “to the abyss of autocracy” which was an unusually strong mark against the royal power.

Emir Sabah al-Ahmed al-Jabir al-Sabah dissolves Parliament and announces new elections until December 1. The government is given an order to change the electoral law so that each voter in the future may only vote for one candidate (instead of the previous four). The amendment is considered to make it more difficult for Islamists and other opposition parties to form alliances, and the opposition calls the emir’s decision “a constitutional coup”. The decision is followed by several major demonstrations in the capital. At least 15 people are arrested and a larger number are injured when police try to disperse protesters with tear gas and rubber bullets.

Around 3,000 people are demonstrating outside Parliament demanding that the prime minister continue to be appointed outside the royal family.

The Emir shuts down Parliament

The emir suspends parliament for a month. It happens the day before the Interior Minister would be questioned by Parliament.

Prison for insulting the Prophet

A man is sentenced to ten years in prison for threatening state security by insulting Prophet Muhammad and the rulers of Saudi Arabia and Bahrain via Twitter. The man claimed he was innocent and someone had hacked into his Twitter account.

Parliament adopts a law sti p ulerar death penalty for Muslims who insult God, the prophets, the messengers, the Prophet Muhammad’s wives or the Koran. If the accused repents, the sentence can be converted to at least five years in prison. For the law to come into force, it must be approved by the emir, but he does not.

Twitterers are sentenced to prison

A 24-year-old Shia Muslim is sentenced to ten years in prison for insulting Prophet Muhammad via Twitter messages. The convict denies the allegations and claims his Twitter account has been hacked. Human rights organizations criticize the verdict and urge the authorities to immediately release the 24-year-old.

Islamist successes in the parliamentary elections

The opposition, with Islamists at the forefront, achieves major successes in the parliamentary elections and wins 34 of the parliament’s 50 seats. No women will have a seat in the new parliament; in the former there were four female members. The turnout is estimated at around 60 percent. After the election, Jabir Mubarak al-Hamad al-Sabah forms a new government.