Although Kazakhstan has a relatively well-educated population, many residents lack formal employment. They must support themselves in the informal sector where they work in unsafe conditions.

Nearly one-seventh in agriculture, one-fifth in industry and others in the service sector are among those who have jobs. Kazakhstan has a high proportion of self-employed workers in the workforce, around a quarter. Many of them are found in agriculture and operate with small resources. Women work almost as much as men.

Many foreign seasonal workers come to Kazakhstan, mainly from neighboring Uzbekistan, to work in agriculture. They often work under difficult conditions and at low wages.

The trade union movement is divided. An older branch, added in the Soviet era (1920–1991), now functions as part of the state apparatus, as in the past. In addition, there are some new, independent unions, including in the mining industry, which have been more active and organized several major strikes. This has led to harassment by employers. 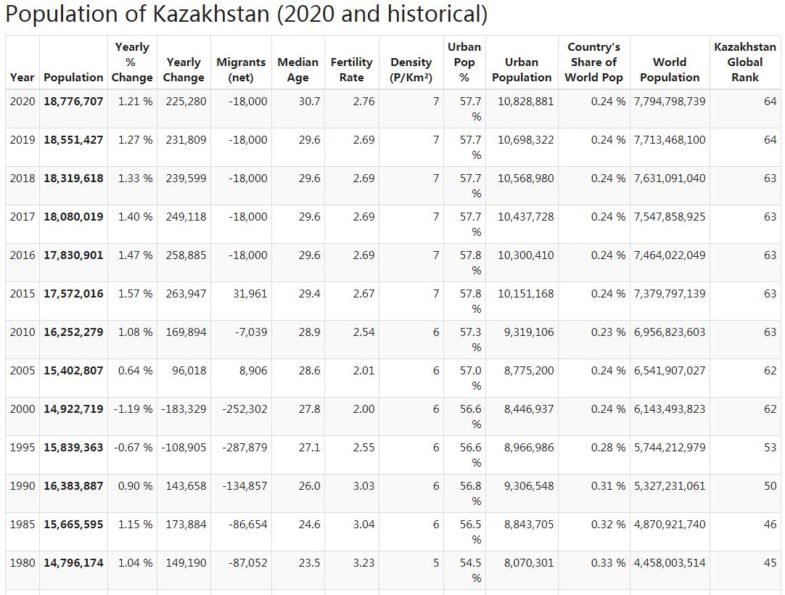 In 2014, a new law forced all the unions in the country to re-register at the same time as new requirements were introduced. As a result, only 163 of 896 unions remained.

Manifestations are held in Almaty on the anniversary of police deaths by protesters in 1986 and 2011 (see Modern History). When the protesters gather again a day later, the police arrest a number of people, including several journalists.

Abljazov is sentenced to life for murder

The regime-critical, fugitive banker Abljazov is sentenced in his absence to life imprisonment for organizing a murder of another banker.

Agreement on the Caspian Sea

The five countries that coast towards the Caspian Sea – Kazakhstan, Azerbaijan, Iran, Russia and Turkmenistan – sign an agreement regulating its legal status. The agreement is signed by the country’s leaders in the port city of Aktau, Kazakhstan. The status of the Caspian Sea has been unclear since the dissolution of the Soviet Union in 1991. The conflict has affected whether it is a lake or an inland sea. An inland sea would be subject to UN maritime law, while the right to a lake must be negotiated between the countries. The ambiguity has led to strained relations between the states as well as ambiguities about who has the right to extract the rich oil and natural gas resources. The agreement provides that the Caspian Sea is neither a lake nor a sea, but has “special legal status”. This means that the surface water should be used jointly by the five states, while the seabed and its assets are to be divided, How these boundaries are to be drawn says nothing about the agreement. The big fishing that produces caviar is regulated by means of quotas. The agreement also states that no other country may establish military bases on the Caspian Sea alongside the five states.

Nazarbayev becomes President of the Security Council for life

President Nazarbayev, through a decree, appoints himself to the President of the powerful Security Council for life.

Parliament gives the country’s advisory security council greatly increased powers of power. The Council should be able to make decisions on security issues instead of giving recommendations now. Since Nazarbayev has the right to be the President of the Council for as long as he wishes, the change in the law means that Nazarbayev can rule over the country in security matters as long as he lives.