Baltijsk (formerly Pillau) is the westernmost city in Russia and is located at the transition from the Samland Peninsula to the Fresh Spit. The city has about 30,000 inhabitants and an important position as a seaport and naval location. During the Soviet era, Baltiysk was a restricted military area and completely sealed off. Even today the city is not freely accessible, you need a pass. If you have it, you should take a look at the harbor (at least at the parts that are released there) – after all, the harbor is the center of Baltiysk par excellence and important for history. The red and white lighthouse, the monument to Peter the Great, the citadel or the Museum of the Baltic Fleet in the former district court are also worth seeing. The city is officially released once a year: on the day of the Russian fleet.

Jantarny translates as “made of amber” – and there is always a reason to name this area after the fossil resin: Jantarny is home to the only amber mine in the world. The entire Samland coast between the Fresh Lagoon and the Curonian Lagoon is known for its rich amber deposits. The amber mining is characteristic of the place. The “Baltic gold” was mined here in both underground and open-cast mining. Above all, the opencast mine unfortunately leads to a landscape (de) formation that cannot be overlooked. A museum in Jantarny provides information about the coveted fossil resin.

In addition to its position as an amber metropolis, Jantarny also has a sad past. In January 1945, 3,000 Jews were killed on the beach by the SS who had previously been driven on a march from a concentration camp near Danzig to Palmnicken. According to the original plan, they wanted to wall the people in the amber mine, but the residents of Palmnickens prevented this. A memorial today commemorates the victims of this massacre.

The old seaside resort of Rauschen, now known as Svetlogorsk, is a popular tourist destination. The extensive sandy beach, the steep coast, a promenade for strolling and pretty wooden villas from around 1900 shape the character of the place. Around that time, Rauschen was connected to Königsberg with the Samland Railway, which of course significantly promoted tourism. Even today there is a train connection from Kaliningrad to Svetlogorsk.

The steep coast is characteristic. The beach, the real main attraction of Svetlogorsk, can be reached from the village by (chair) lift. In addition, the Samland Railway has another stop next to the train station with direct access to the beach. The former Protestant church dates from 1907. However, since 1992 it has been used by the Russian Orthodox community. There is a bathing establishment in the old water tower. And in the spa gardens you can end the day with a walk.

About 13,000 people live in Zelenogradsk (formerly Cranz). The place was already a popular travel destination in earlier times: It was the most important and glamorous seaside resort on the East Prussian coast and has been connected to Königsberg by a rail link since 1885.

There is not much left to see of old Cranz and the glamorous times. It lost its importance, relinquished its prominent position as a seaside resort to Rauschen (today Svetlogorsk), and buildings fell into disrepair. But if you like this ailing charm, you will feel at home in Zelenogradsk. You can go in search of clues and here and there you will still be reminded of the sophisticated Cranz.

Modern tourism development in Zelenogradsk is still in its infancy. But in recent years more and more holiday homes have been built here and the place has become a popular holiday destination for the wealthy citizens of the Kaliningrad exclave. In contrast to most of the northern Samland coast, Zelenogradsk has no steep banks, so that there is direct access to the beach.

The Curonian Spit is a popular holiday region in the Kaliningrad exclave and also a nature reserve. It is characterized by an extensive dune landscape, pine forests, the lagoon and the Baltic Sea coast and the tranquil villages of Lesnoje (Sarkau), Rybatschi (Rossitten) and Morskoje (Pillkoppen).

The settlement history of Lesnoje (formerly Sarkau) begins in the 15th century when fishermen, the Kuren, settled near the present village. Initially, the place was protected from the shifting dunes, which were set in motion by deforestation measures. Later he had to be resettled twice because of the sand drift. In addition, drifting sand destroyed the agricultural fields.

The old Sarkau and today’s Lesnoje is located at the narrowest point of the spit, it is only 400 meters wide here. The place is therefore at the same time on the Haff and the Baltic Sea coast and is therefore particularly threatened by storm surges. In the past, these have already made the place impassable. The last time the Curonian Spit was breached here was a hurricane in 1983. The breaking point had to be refilled and stabilized.

The old church of Lesnoye was completed as a brick church at the beginning of the 20th century and has since changed so much that it hardly looks like a church anymore – and is no longer used as such. The roof has been changed and the tower is missing today.

The Spit Museum is located north of Lesnoye in a former Soviet guest house. Here the visitor receives interesting information about the ecology of the Curonian Spit, its villages and its history.

Rybatschi’s (formerly Rossitten) settlement history goes back a long time. In the 14th century there was a castle here, later a religious house with an attached stud, a brick factory and a castle chapel. Because of the good soil, agriculture was practiced near Rossitten, but fishermen lived here even then.

Although Rossitten was not as threatened by the shifting dunes as other spit villages, the sand here too had to be paved after the deforestation measures. In the 19th century, the dune inspector Franz Epha achieved fame for his successful fight against the moving sand masses. At that time the first tourism developed in Rossitten.

The Rybatschi ornithological station, which was founded in 1901 by Johannes Thienemann, actually a theologian, is best known. It was the first ornithological station in Germany. Thienemann observed birds, ringed them and researched the bird world and the bird migration of the spit. He studied zoology at the Königsberg Albertina and became a professor there in 1910. Thienemann died in Rossitten in 1938. The tombstones of Johannes Thienemann and the dune inspector Franz Epha can still be found in the old cemetery.

Even today, birds are observed and ringed at the ornithological station. The station is no longer in its original location, it is now housed in the former guest house of the Kurhaus. Visitors are welcome. The same applies to the field station Fringilla (Latin name for chaffinch) south of Rybatschi, where birds are captured with fish traps and nets. The field station was set up in 1957.

The Rybachi Church is well worth a visit. The old brick church served as a warehouse for fishing nets during the Soviet era. It has been used as the Russian Orthodox Church since the 1990s.

The “Müller Höhe” viewpoint is located near the Rybatschi settlement. Forester Müller was also involved in the planting of the shifting dunes. From an observation tower you have a beautiful view of the area.

Morskoje (formerly Pillkoppen) is probably the most original of all spit villages and is also the northernmost place on the Russian side of the Curonian Spit.

In the course of history, Pillkoppen suffered several setbacks: In the 17th century, not only did the plague make life difficult for the place and its inhabitants, the shifting dunes were also ruthless and forced the inhabitants to move the place several times. The dune inspector Franz Epha finally succeeded in putting a stop to the migrating sand masses. In his honor, the Pillkoppener renamed the threatening dune Petschberg to “Ephas Höhe”.

The area around Ephas Höhe cannot be entered without restrictions, as the place is close to the border. In order not to come into conflict with the Russian border guards, one should definitely pay attention to clues.

The Kurschskaja Kossa National Park was founded in the late 1980s and takes up a large part of the southern spit. The extensively forested protection zone extends from the Lithuanian border to the seaside resort of Zelenogradsk (Cranz).

There are a few rules that you should follow in the park: Open fires, camping, smoking, driving on forest paths and picking plants are not allowed. For a swim in the Baltic Sea, you should only choose designated beaches; holidaymakers should not bathe in the lagoon at all. Visitors should pay attention to signs and adhere to the appropriate rules of conduct in the respective protection zones.

At the turnpike near Zelenogradsk (Cranz) a fee has to be paid for access to the national park – the cost for a car is currently around 8 euros.

Attention: It is forbidden to leave the Spit Road in the border area. Since the controls are tight, they should be followed. 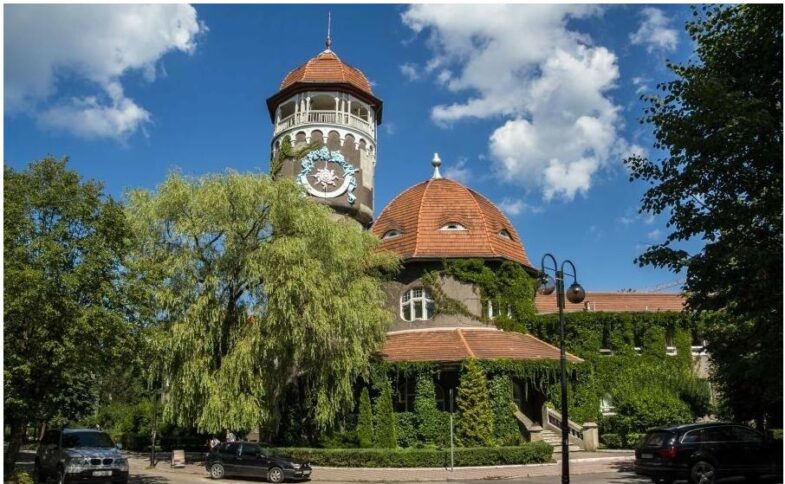