The old Tilsit and today’s Sovetsk lies in the north of the Kaliningrad area on the Memel. The Luisenbrücke leads from the Russian exclave over the historic river to the EU member state Lithuania. It was blown up in 1944 to make it difficult for the Soviet army to advance, but part of the old bridge is still there today.

In Sovetsk, as in the entire Kaliningrad region, old architecture was destroyed or left to decay. Churches, the old castle and the town hall are therefore no longer preserved. Nevertheless, historical streets can be discovered that bring East Prussian history to life. In Hohen Strasse (Uliza Pobedy), for example, you can still admire the art nouveau and neo-renaissance facades – albeit a bit worn out. Caution: Due to its location near the border, Sovetsk (Tilsit) is a restricted area and can only be visited with a special permit. If you want this, you can contact a tour operator who specializes in the region, who will arrange everything necessary. 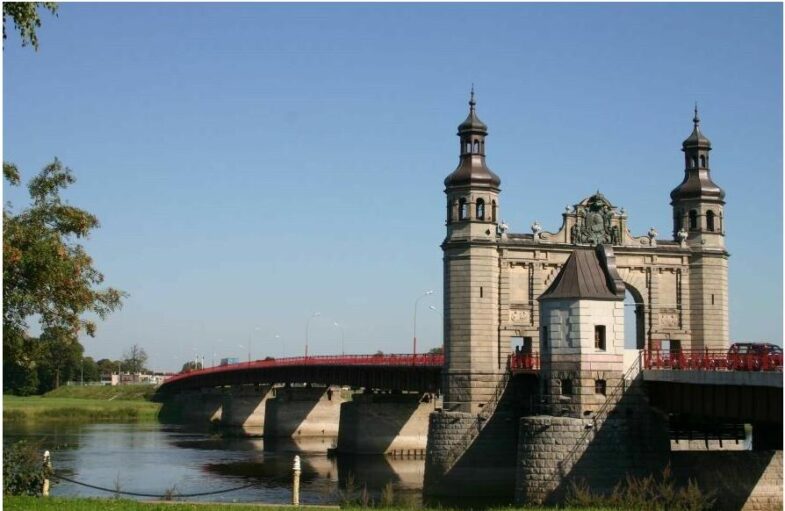 The small town of Neman, formerly Ragnit, is located near the old Tilsit and also on the Memel. The place can boast with an old order castle, which was built at the end of the 14th and beginning of the 15th century and was to become one of the most powerful castles of the Teutonic Order. It was also damaged by fire, but the impressive ruins can still be visited. 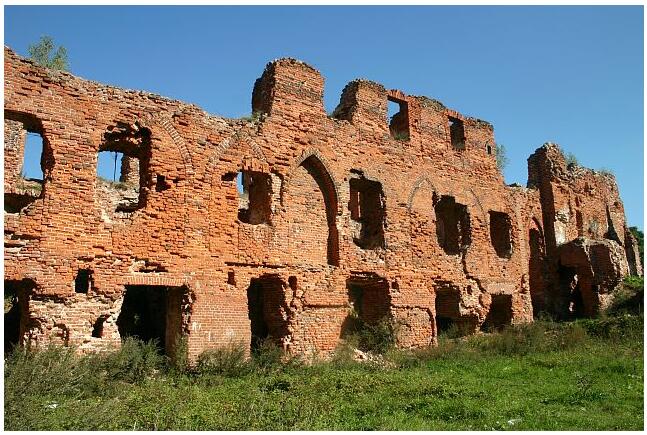 Insterburg was conquered by the Soviets in January 1945 and later renamed Chernyakhovsk. Here, too, the original population was expelled and “replaced” by Russian residents. Chernyakhovsk today has a little over 40,000 inhabitants. The Russian Orthodox Archangel Michael Church, the Catholic Church of St. Bruno from 1912 and the ruins of the old castle are well worth seeing. 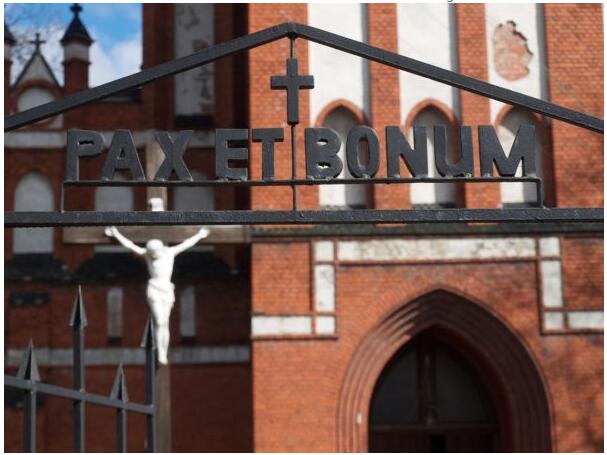 The small town of Maevka (formerly Georgenburg) is located near the town of Chernyakhovsk. Maevka is particularly famous for the traditional stud farm, which today – after it was not used as a stud farm from the end of the Second World War until the 1960s – is operated as such again. There was an internment camp for German prisoners of war on the site for a few years at the end of the 1940s. The remains of the old Georgenburg are worth seeing. The first castle was built in 1345 as a wooden structure, but was later destroyed and rebuilt in stone. A stud farm was already attached to the castle at the time of the Teutonic Order. 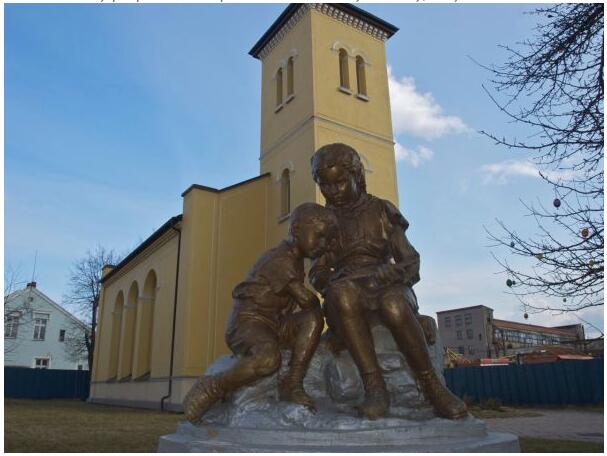 The small town of Gussew (formerly Gumbinnen) has less than 30,000 inhabitants and is located in the eastern part of old East Prussia. The Salzburg Church is probably the most famous building in the city. At the beginning of the 18th century, several thousand Protestant religious refugees settled from Salzburg, but also from other areas in northern East Prussia. The Evangelical Lutheran Church was built in the classicist style in 1840, suffered severe damage in the Second World War and was misappropriated and used as a warehouse for road construction during the time of the USSR. After a comprehensive renovation, it is now available again to the Evangelical Lutheran congregation.

Also worth seeing is the statue of the Gumbinner Elk, the symbol of the city, which, after its exile in the Kaliningrad Zoo, has been enthroned again in Gusew on the beautifully prepared elk square since 1991. By the way, very close to Gussew (Gumbinnen) is the former Trakehnen stud.

The Elk Lowland (in Russian: Losinaja Dolina) is located in the border area between Russia and Lithuania and borders the Curonian Lagoon in the west. It is characterized by rivers, moors, forests and swamps.

The elk lowlands are a paradise for birds and are also home to numerous rare animal and plant species. The area has always been very sparsely populated, people first had to reclaim the moor landscape with sophisticated drainage systems, and small moor colonies emerged. Many of the places were cut off from the outside world at the time of flooding, there were hardly any roads and boats were the main means of transport. In the course of Soviet rule, which was geared towards large-scale agriculture, knowledge of drainage and the actual drainage systems were lost. The population who knew about it fled or was expelled, the new (Russian) residents were not familiar with drainage systems. The area became overgrown. Today there are only a few small get secluded places. Moose can be found again today in the moose valley.

The Rominter Heide, a landscape that is characterized by forests and heathland, is located in the southeast of the Kaliningrad region and in the northern part of Poland. About two thirds of the area is on Russian territory and one third on Polish territory. It is called Krasnij Les in Russian, which means something like “Red Forest”. The area is traversed by the Rominte (in Russian: Krasnaja). In the past it was used as a hunting ground by the Prussians and later by the National Socialists (namely: Hermann Göring). The hunters mainly shot deer, but also bears. The Rominter Heide is also known for the porcini mushrooms that grow here. 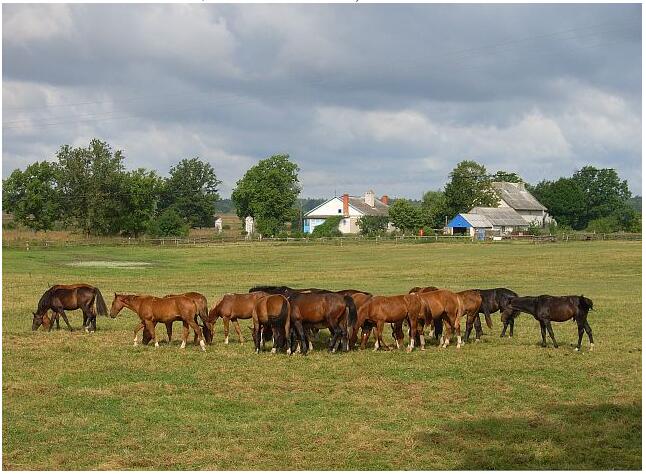 The Samland Peninsula lies between the Fresh Spit and the Curonian Spit. The Samland coast includes the Baltic coast of the Samland peninsula with the main towns of Baltijsk (Pillau), Jantarny (Palmnicken), Swetlogorsk (Rauschen) and Zelenogradsk (Cranz). The north is mainly characterized by a steep coast, the south by beautiful dune landscapes. 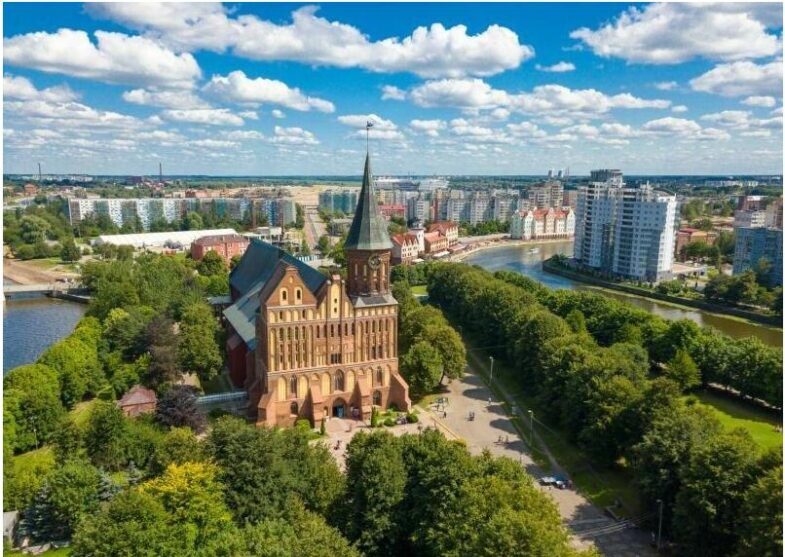