The right to work is enshrined in the constitution. Nevertheless, 2019 unemployment was officially at almost 15 percent; in reality, almost a third of the workforce is estimated to have no jobs. A relatively small proportion of the population work in agriculture and industry, while about three-quarters of the labor force is in any way employed in the service sector.

Many Jordanians work abroad, mainly in the oil producing countries around the Persian Gulf. The relatively high wages of foreign workers have made their families a well-off group in Jordanian society.

At the same time, there are hundreds of thousands of foreign migrant workers in Jordan, from Iraq, Sudan, Egypt and a number of Asian countries. They work primarily in agriculture, on construction or are employed by households and although they are now covered by labor legislation, they are in many ways a vulnerable group. In addition, many are illegally living in the country and thus lack all rights. There is a statutory minimum wage, but it is not always respected. It also applies to Jordanians, the minimum wage for guest workers is lower.

The addition of refugees from neighboring countries, not least Syria, creates even greater competition for jobs. The UNHCR noted in 2019 that 125,000 work permits had been issued for Syrians between 2016 and 2019, but how many living illegally in the country is difficult to calculate. 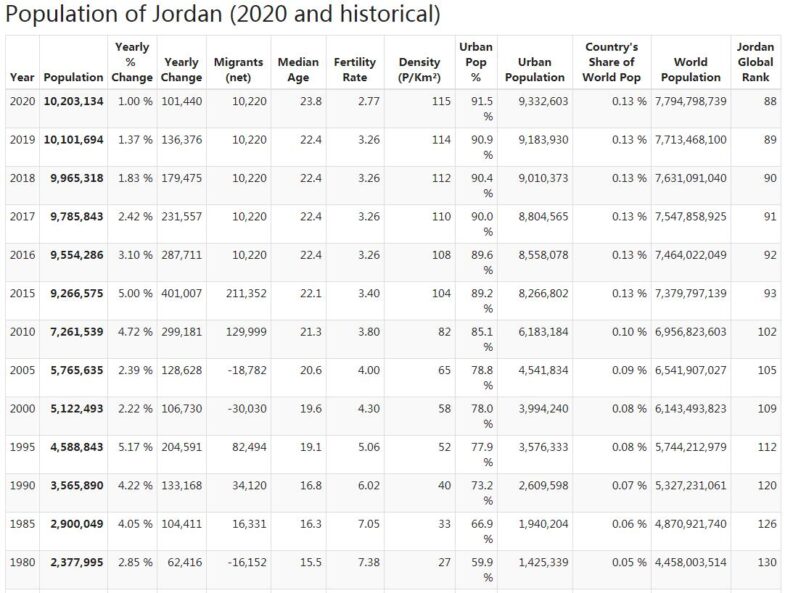 The labor market is dominated by men. Jordan has ratified ILO conventions against child labor and children under 16 are not allowed to work by law, but child labor does exist.

In the fall of 2019, teachers carried out a month-long strike, which was canceled after receiving promises of salary.

King Abdullah inaugurates the country’s first wind power plant in the province of Tafila in the south. With the new power plant in use, Jordan will extract seven percent of its energy from renewable energy sources. The goal is to reach up to ten percent by 2020.

A Muslim minister is sentenced to two years in prison for “inciting hatred against the government”. The preacher had on Facebook criticized Jordan’s peace treaty with Israel as well as expressed the view that Western culture and ideals had too much influence over Jordanian society.

Jordan and Russia are reported to have agreed to coordinate their military operations in Syria.

Demonstrations are held in a number of cities demanding that Jordan scrap its peace deal with Israel. The backdrop is last month’s violent clashes between Palestinians and Israeli security forces at Temple Mount in Jerusalem, a holy place for both Jews and Muslims.

The United Nations Food Program (WFP) halves emergency aid for the more than 600,000 registered Syrian refugees located in Jordan. The reason is lack of money.

Opposition politicians are sentenced to prison

The second-highest leader of the Jordanian branch of Muslim Brotherhood is sentenced to 18 months in prison for damaging Jordan’s relationship with another country (see November 2014). The judgment provokes resurrection as it is the first time in many years that a highly regarded person in the opposition is brought to trial in a case of this kind.

The execution of the Jordanian pilot has consequences

The Islamic State threatens to execute the captured pilot unless Jordan releases a female IS prisoner. Jordan accepts the claim but demands that IS first prove that the pilot is alive. No evidence comes, and when IS releases a video showing how the prisoner is burned alive, Jordan executes two prisoners, one of whom is the woman whom IS wanted to exchange. The woman had been sentenced to death for participating in the assaults on three hotels in the capital that claimed more than 60 lives in 2005 (see Modern History). After the assassination, Jordan carries out a series of air strikes against IS strongholds and announces that the country will now use all its forces to destroy the movement.