Of the approximately 65 million people who were part of Japan’s workforce in 2014, four out of five were employed by others, while the others were self-employed or worked in family businesses. But the proportion of self-employed workers has been declining for several decades.

Unemployment was below 2 percent until the mid-1970s. It then slowly increased to reach 5.4 percent in 2002. It then declined to rise again in connection with the global financial crisis and the recession of 2008. In 2010, unemployment began to turn down again.

The main reason for the relatively low unemployment rate has been large companies’ systems with lifetime employment. Employees are traditionally recruited when they leave school and usually stay in the same company for retirement. In silent agreement between employees and management, the company undertakes to retain its staff even during tougher times. When the workforce is taken directly from school, companies must be given further training, and large companies often offer entire training programs at each new career step. The system paves the way for low labor costs and high efficiency, creates a relationship between companies and labor and reduces the risk of labor market conflicts.

Over time, however, these basic principles have also been loosened up. Gaps have arisen between well-paid permanent employees and a growing group of low-paid workers with low education and insecure jobs. Middle-aged and older workers are increasingly relocating or retiring early. Almost one in four employees in Japan now have a “non-regular” job. All non-regular jobs are counted as non-regular jobs, ie part-time jobs, part-time jobs, temporary jobs and various forms of temporary employment. More than half of the employed women now have “non-regular” work, while the corresponding proportion for men is 20 percent. 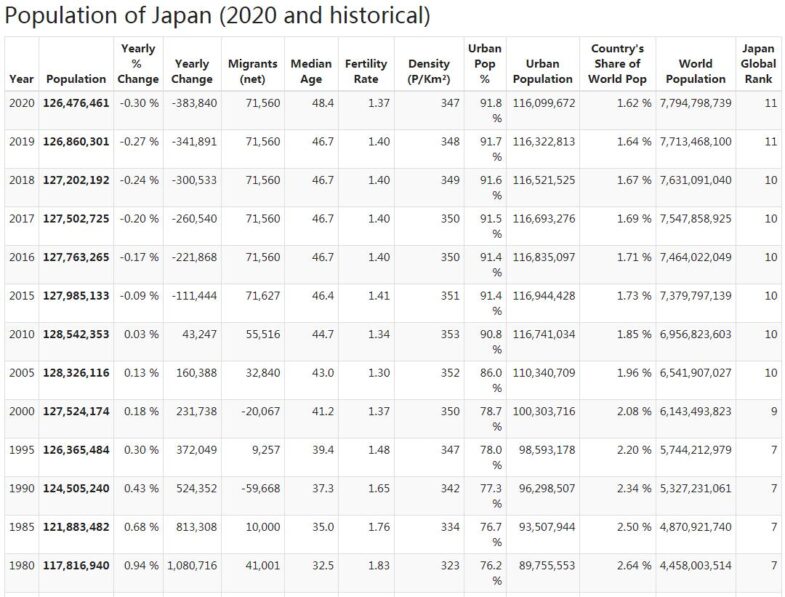 Another change is that younger employees are now less willing to commit to a company throughout their working life. The elderly, raised with war and misery in strong memory, joined the demands of the labor market. Their children, on the other hand, grown up in prosperity and with better education, make other demands and rarely prefer leisure time to higher salaries. Workplace change is becoming more common. A relatively new source of concern for the government is the growing number of young people who go completely out of work or just prefer temporary part-time jobs to permanent employment.

As a rule, wages have been linked to age and employment with automatic salary increases with rising age for both workers and salaried employees. Within the system, individual salaries are also increasingly governed by qualifications, responsibilities and skills. In addition to basic salary, Japanese companies usually pay bonuses corresponding to four to five monthly salaries per year and calculated on the annual result and the workforce’s efforts.

By tradition, women have not been expected to work since they got married, and those who invest in a professional career often find it difficult to get equal positions as men with the same qualifications. Women are still few in leading positions in companies and in politics.

Among part-time workers, women still dominate, and it is mainly low-paid women in non-permanent employment who accounted for the increase in the number of employed in 2013 and 2014. At the same time, full-time women also earn less than men. In a 2013 study, the International Monetary Fund (IMF) stated that full-time women in Japan earned 27 percent less than their male counterparts.

The unions, where officials and workers come together, are usually organized from company to company. They are then formed into larger groups and trade unions. In 2013, less than a fifth of Japan’s workforce was 55 million unionized (just under 10 million). The largest trade union central union is Rengo, founded in 1987.

The working week has been shortened from 48 hours during the 1980s to 40 hours, but although the five-day week is practically completed, the Japanese have far fewer days off per year than employees in Europe and the United States. Most companies still consider it obvious that staff are working overtime. In addition, the unpaid leisure time many employees are expected to spend on social interaction with colleagues and managers. Overtime is an additional handicap for working women, who are also responsible for households and children. Therefore, many women take part-time jobs to cope with the double work.

Summit between Abe and Putin

Russian President Vladimir Putin and Prime Minister Abe agree after a two-day meeting, among other things, to start talks on joint development projects on disputed islands in the Kuril Islands archipelago. But no major breakthrough is being achieved when it comes to the island dispute or towards reaching a formal peace agreement. However, the countries agree on a number of business agreements.

The TPP trade agreement is meaningless without the US

That’s what Prime Minister Abe says after Donald Trump announced that he wants the US to leave the deal when he takes over as US president.

Renho Murata, a former TV profile and MP for the Democratic Party, is elected new party chairman. Renho, who has a Taiwanese father and a Japanese mother, is popular with many Japanese and she becomes DPJ’s first female party leader.

The age-old emperor announces his wish in his second TV speech to the people ever. The closest to take over is Crown Prince Naruhito.

Tokyo gets female governor for the first time

Former Defense Minister Yuriko Koike has been nominated as an independent candidate in the elections, despite the fact that she formally belongs to the LDP. However, the party did not want to stand behind her in the elections.

The government secures its own majority in the parliament’s upper house senate. Thus, the government parties have their own majority in both chambers of parliament and make it easier to gather the votes needed to change the constitution. Of the 121 seats that were at stake in the general election, the ruling party LDP wins 56 seats, while ally Komeito gets 14 seats. Opposition Party The Democratic Party gets a mandate.

Japan participates for the first time in a joint missile defense exercise with the United States and South Korea. The exercise is a response to North Korea’s mid-range missile test shooting.

The new national security legislation passed in September makes it possible to use the country’s self-defense forces even in situations when Japan is not subject to an attack.

Two reactors in Takahama, western Japan, will be closed, according to the court decision, which comes after residents in the area criticized the nuclear power plant for lack of security.

Government postpones relocation of military base

Construction in connection with a planned relocation of the US air base Futenma on Okinawa is suspended after a court decision. The government wants to base it on another part of Okinawa, but residents do not want it to be there at all.

The central bank lowers the interest rate to -0.1 percent. This is the first time that negative interest rates have been introduced.