With a few exceptions, unemployment has been double-digit in Jamaica since the 1990s. Among young people, this figure has been higher than every third.

The figures can in practice be higher, since far from all unemployed people register. Instead, some of them support themselves in the informal, black sector of the economy, such as street vendors or day laborers in agriculture.

Two-thirds of the employees work in the service sector, not least the important tourism. The others are divided equally between industry and agriculture.

About one in five employees are unionized. Trade unions are strong in Jamaica and the two largest unions, the National Workers Union and the Bustamante Industrial Trade Union, have for decades been in close contact with the political parties (see Political system). 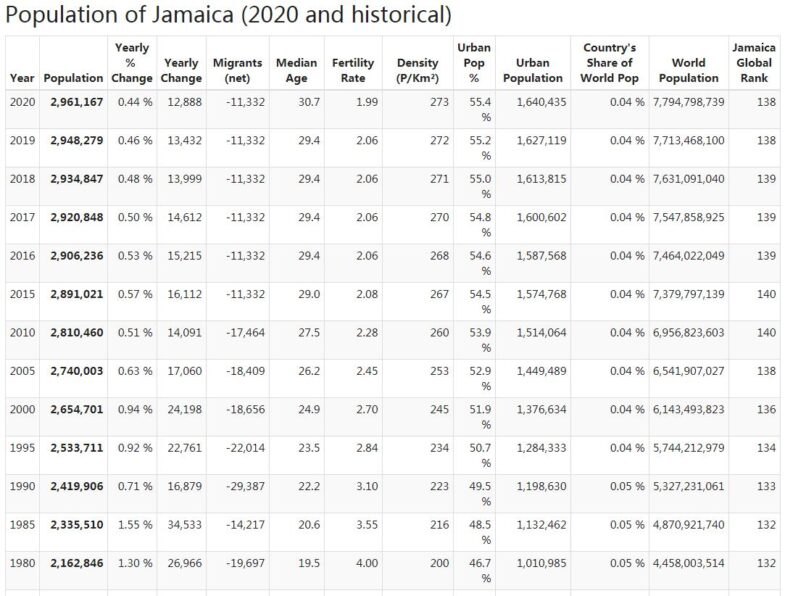 The International Monetary Fund approves a US $ 520 million loan due to the economic crisis in the corona pandemic track. The sudden loss of tourism revenue and money shipments from Jamaicans abroad has quickly created big holes in the budget.

Curfew because of corona

A nationwide curfew will be introduced from April 22, between 6pm and 6am, due to the ongoing corona pandemic. In the past, schools and borders have been closed, and people groups that were previously limited to 20 people are now halved, to a maximum of ten. So far, over 220 cases of infection have been discovered in Jamaica and five people have died.

The government is losing out on an emergency permit

A murder scandal in Montego Bay has prompted authorities to call for state of emergency that applies to the entire district of Saint James. The army is deployed to support the police, who are granted extended rights, among other things, to conduct investigations. The United States, the United Kingdom and Canada urge their citizens in the area to stay in tourist facilities and be especially careful at night. In 2017, 335 murders were committed in Saint James.

A new law gives the prime minister the opportunity to temporarily deploy police and military in areas characterized by gang violence. The security forces are given an extended opportunity to block off areas and impose curfews and carry out raids and visit people without first obtaining permission from the court. Furthermore, the possibility of seizing vehicles and objects and arresting persons on “reasonable terms” is expanded.

Portia Simpson Miller leaves the party leader post for PNP and is replaced by Peter Phillips, who also assumes the role of opposition leader. The 68-year-old Phillips was finance minister in Simpson Miller’s second government. “Last P” has led the party for eleven years and served as prime minister in two rounds, 2006-2007 and 2012-2016.

The new government takes over with JLP leader Andrew Holness as prime minister. Holness was also the head of government for a few months around the turn of the year 2011/2012. He now estimates a relatively conciliatory tone with reference to the small margin of victory. Economic stability becomes a guiding principle when the economic ten-point plan presented by JLP is implemented, he assures.

The right-wing party JLP wins in the parliamentary elections with 32 seats against 31 for the Social Democratic PNP. The victory is fine: JLP gets 50.1 percent of the vote against 49.7 percent for PNP. The turnout of just over 47 per cent is said to be the lowest recorded in the country.

Prime Minister Simpson Miller announces at a mass meeting of party supporters in Kingston that the next parliamentary elections will be held on February 25. It will be ten years after her entry as PNP leader.

Health Minister Horace Dalley advises women not to become pregnant within the next six to twelve months, due to the mosquito-borne zika virus that is feared to cause birth defects. The warning is issued even though no cases of zika have yet been discovered in Jamaica. An outbreak of zika began in Brazil in 2015 and is spreading rapidly in the region; zika cases have been discovered in Haiti.