In the mid-1900s, 4 out of 10 Italians worked in agriculture; today that figure has dropped to just under 4 out of 100. Nowadays most people find their livelihood in the service sector which includes tourism and jobs within the state or municipality. Just under a quarter of all employees have jobs in the industry.

The proportion of working people is significantly lower in Italy than in other EU countries. Just over half of all working-age people work, compared to almost two-thirds on average in the euro zone. There are major differences regionally. In the north, 67 percent work against 45 percent in the south.

Women are particularly poorly represented in the labor market. Only about 50 percent have work outside the home. The figure is even lower in the southern parts of the country. An important reason is the traditional segregation between the sexes and the lack of childcare (see Social conditions). Unskilled jobs are more often occupied by women than men, even though Italian women are better educated than men, and women have lower wages.

In the first years of the 2000s, unemployment fell to some extent through employment reforms and good economic growth. In 2007, unemployment was almost down 6 percent, but then turned upward and increased during the economic crisis of 2009. Unemployment is higher in the south than in the north and higher among women than among. The highest figure is for young people. Nearly 40 percent of all young people lack jobs. 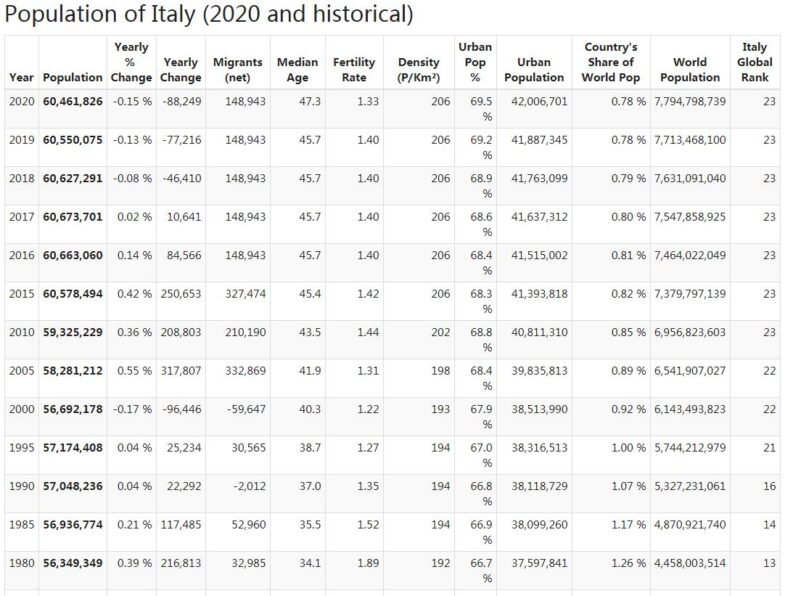 Wages are relatively low, and about six million Italians are estimated to have double jobs. The informal labor market is estimated to employ several million.

The labor market is more tightly regulated than in most EU countries. Changes around the year 2000 improved the conditions for part-time work, and it became easier to take temporary employment. This has resulted in a divided labor market where a group of permanent employees has a strong job security while many others work on temporary contracts without any protection.

In 2012, Parliament voted for a labor market reform, which was intended to limit jobs with temporary contracts and to make it easier for companies to dismiss employees for financial reasons. The reforms that triggered a long battle with the unions were mitigated in several steps and applied only to companies in the private sector. In 2014, a new law was adopted with the same ambition. Under the old rules, a person who was laid off could sue the employer and often get the job back. Now it was harder to get the job back; the person who became unemployed would instead be compensated financially. This reform also triggered powerful union protests.

The government approves the new labor market reform, which was passed earlier this month by Parliament. The reform, which means that job security is loosened up, has led unions to go on strike and major demonstrations have been held in some 50 cities in protest.

A grand trial is set to begin in Rome. On the prosecutor’s bench are 46 people, both suspected mafia members and local politicians from the Democratic Party and Heja Italy. They are suspected of foreclosing millions of euros from the public cash register in Rome from 2008 to 2013.

Democratic Party candidates win the regional elections in Calabria and Emilia-Romagna. However, turnout is unusually low.

The CGIL trade union organization organizes a mass demonstration in protest of the Renzi government’s plans for a labor market reform, which among other things means that job security is loosened and that it becomes easier for employers to dismiss staff.

The members of Parliament’s upper house, the Senate, vote in favor of a proposal to cut the Senate’s powers (see January 2014).

Figures from the statistical authority show that GDP fell by 0.2 percent in the second quarter of 2014, instead of increasing by 0.1 percent, which is forecast in forecasts. The press is thus further increasing Renzi’s government to implement economic reforms that can boost the crisis-hit economy.

The jail sentence against former Prime Minister Berlusconi for, among other things, having bought six of a minor (see June 2013) is set aside by an appeals court. The judgment is appealed.

Federation North criticizes the rescue project Mare Nostrum, which they say is an overburden burden for Italian taxpayers, while it, according to the party, encourages people to try to get to Italy.

The refugee crisis is intensifying

New boat refugees arrive daily in Italy. The Navy claims to have saved 5,000 people just during the last weekend in June. Since the beginning of the year, more than 55,000 people are estimated to have fled to Italy to escape war and hardship. The Italian government is again urging the other EU countries to help Italy cope with the influx. EU Commissioner Cecilia Malmström promises EUR 4 million in crisis support.

The Italian support for Prime Minister Renzi and the Democratic Party is manifested in the elections to the European Parliament on May 25. The party receives as much as 40 percent of the vote, according to preliminary results. The five-star movement comes in second place with about 22 percent. Berlusconi’s Heja Italy is supported by 16 percent of voters.

Berlusconi gets to work with dementia

Berlusconi launches community service at a nursing home near Milan. The former head of government is convicted of tax offenses (see August 2013) and will serve the sentence for a year by working four hours each week on a housing for the elderly with dementia.

Prime Minister Renzi and his government are presenting a stimulus package to boost the Italian economy. According to official statistics, GDP fell by 0.1 percent during the first quarter of the year. Renzi wants to introduce tax cuts for ten million low- and middle-income earners of the equivalent of ten billion euros. According to the government, the budget deficit ceiling, currently 2.5 per cent, needs to be raised slightly, but Renzi promises that the EU requirement of no more than 3 percent should not be exceeded.

Beppe Grillo, the leader of the Five Star Movement is sentenced to four months in prison for breaking into a barricaded area in connection with a 2010 protest against the construction of a new high-speed train line between Turin and Lyon.

Matteo Renzi is installed as Italy’s youngest prime minister. He becomes the head of a center-left coalition made up of the Democratic Party, the former head of central government Mario Montis and the defectors from the Berlusconi party gathered in the newly formed New Center Right. The government comprises 16 ministers, of which the booklet is women. With an average age of less than 48, the Renzi government becomes the youngest in the country’s modern history. Among the ministers are Federica Mogherini as Foreign Minister, Roberta Pinotti as Minister of Defense and Pier Carlo Padoan as Minister of Finance. Berlusconi’s old arms carrier Angelino Alfano remains as Minister of the Interior. Upon its entry, Renzi promises comprehensive labor market and education reforms within four months as well as a new electoral system and new tax laws. He also wants to deprive the Senate of its legislative power (see January 2014). Renzi receives Parliament’s support for his policy.

The Democratic Party votes to replace Enrico Letta as head of government with the party’s new leader Matteo Renzi. With his 39 years, Renzi becomes the country’s youngest prime minister to date.

A trial against Berlusconi begins in Naples. The former prime minister is suspected of having paid € 3 million to a former senator to replace the party and help to topple the center-left government in 2008.

Reforms of the Senate and the electoral system

Democratic Party leader Matteo Renzi presents a proposal for comprehensive constitutional and electoral reforms. The proposals include a severe restriction on the power of the Senate so that the government is no longer dependent on both the Chamber of Deputies and the Senate to be able to govern. So far, all laws have been passed by both chambers, which has often resulted in the legislative process often dragging on for many years. The Senate is now proposed to be given an advisory role and will lose weight from 315 to 100 members. The Senate also loses its right to raise the confidence voteagainst the government but may retain its veto on constitutional issues. Renzi is also proposing a new electoral system, which means that the party that receives 40 percent of the vote in the House elections will automatically receive 340 of the Parliament’s 630 seats. If no party reaches 40 percent in the first round, a second round shall be held between the two parties that have become the largest and the winner will receive the 340 seats.

Renzi has sought and received support for his reform plans at Berlusconi, which, despite being excluded from the Senate (see November 2013), still retains his role as leader of the opposition. Renzi receives sharp criticism from party mates for his courting of Berlusconi.