The lack of work has long forced many Irishmen to emigrate. In 1993, almost every fifth Irishman was missing work. Unemployment fell rapidly during the good years of the 1990s and Ireland also had to receive labor from outside. In connection with the economic crisis of 2008, many jobs disappeared and a new wave of emigration was started, especially when young Irish people traveled abroad to find a job. Since then, employment has risen again and unemployment has dropped significantly.

Today, just over three Irish out of four work in the service sector. About one fifth of the labor force was found in industry, which is less than in 2006, but a clear increase from the worst crisis years, when many jobs disappeared in the construction and manufacturing industries.

During the 1990s, productivity rose rapidly in the Irish labor market, and today is well above the EU average.

Ireland, together with the United Kingdom and Sweden, were the only countries that did not impose restrictions when the EU expanded with ten new member states in 2004. Prior to Bulgaria’s and Romania’s entry into the EU in 2007, Ireland decided to request a work permit for workers from these countries for a seven-year period. Nor would they be entitled to any contributions. Many left Ireland when the economy deteriorated, but in recent years labor migration has risen again.

In 2016, more than 347,000 foreign nationals worked in Ireland, most of them from other EU countries, but also from India and Pakistan. A large part of them were women who worked in shops or in hotels. But many immigrants also worked in the IT sector, retail, manufacturing or healthcare. 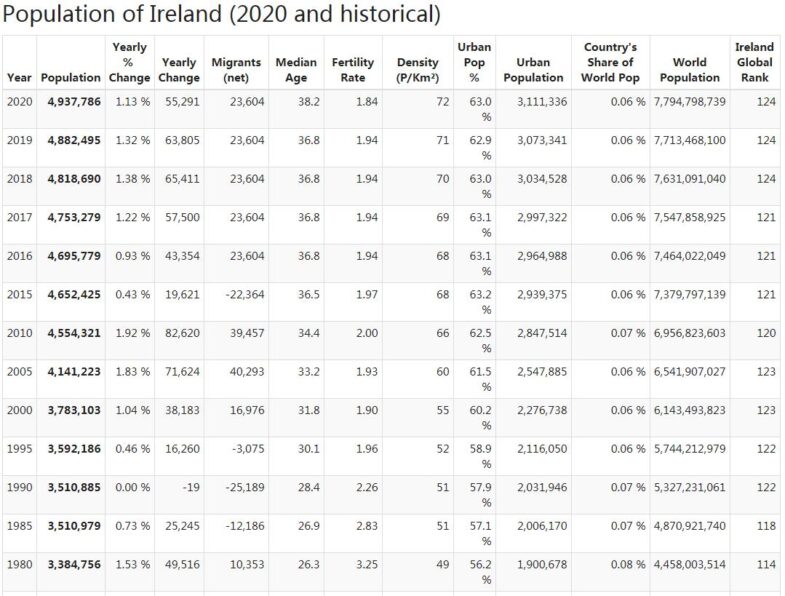 In 2007, unemployment was below 4 percent, but it rose rapidly as economic activity turned downward. In August 2012, more than 15 percent of Irish people went without jobs, which was the fifth highest figure in the EU. Especially vulnerable were the young. Unemployment for people aged 15-24 increased from 9 percent in 2007, according to the International Labor Organization ILO, to 27 percent in 2009. According to the ILO, the figures would be even higher if you included everyone who studied or lived with their parents in anticipation of better times. After that, unemployment dropped rapidly. By the summer of 2019, the trend had turned to such an extent that Ireland began to say that the country was approaching full employment, with an unemployment rate of just over 4 percent, and then rising somewhat at the end of the same year.

During the crisis years, many Irish people left the country to work abroad, which during the toughest years helped keep unemployment rates down. It was not only unemployed who left Ireland, but even Irish people who had a job left. According to a study conducted by Cork University, about half of emigrants had resigned from full-time employment. The emigration has continued even after the economy has recovered, not least that many doctors and nurses are leaving to work abroad.

Public employees who chose to retire early in spring 2012 could do so on favorable terms. The government hoped that this would reduce the number of public employees from 300,000 in 2011 to just over 280,000 in 2015. However, it was criticized for offering too generous terms. At the same time, many authorities had a termination of employment. By 2019, the number of public servants had increased to over 350,000.

In 2000, a national minimum wage was introduced, which in February 2020 was just over 10 euros per hour for adults. According to several reports, immigrants working in agriculture or the construction industry had wages that were below the statutory level.

In 1981, women were given the statutory right to return to work after giving birth. However, the lack of affordable childcare precludes many women from entering the workplace. In 2019, 68 percent of women worked, compared with 80 percent of men. However, it is far more common for women to work part-time than men do. The women’s wages in 2019 averaged 18 percent below the men’s. The difference was even greater when it came to couples with children, when women earned an average of 32 percent less than men. Similar gender differences exist when it comes to pensions.

On average, the Irish work 39 hours a week.

Child labor is prohibited. However, from the age of 14, children can work with lighter chores, but the child must have turned 16 in order to work full time.

In 2004, Ireland was the first country in Europe to ban smoking in all workplaces. In practice, this meant that smoking was no longer allowed in pubs and restaurants.

Some 50 unions are part of the Irish Congress of Trade Unions (ICTU) which is also active in Northern Ireland. In 2017, ICTU had approximately 800,000 members, most of them working in the public sector. The Irish unions run a number of social issues, including the right to housing at reasonable costs (see also Social conditions).

The largest employer organization is the Irish Business and Employers Confederation (Ibec), which in 2016 included 7,500 companies and organizations.

From 1987 to 2009, ICTU and Ibec had great political influence through the social partnerships they entered into with the government, where they agreed on tax cuts in exchange for the parties guaranteeing peace in the labor market and moderate wage increases.

It was previously optional for Irish companies to hold collective bargaining with the unions. In 2015, this was changed by new legislation, which made it possible to negotiate collective agreements even with companies that have previously refused to cooperate with the union. This was done despite opposition from the employer side, which argued that stricter regulation would lead to job losses and that the existing legislation contained adequate protection for all wage earners.

Tensions within the government are strong when the two parties are to agree on new cuts in the budget for 2013/2014. Since the crisis began in 2008, savings of around 24 million euros have been made. For the next financial year, EUR 2.5 billion will be cut, and a further EUR 5 billion will be removed over the next two years. Despite all the savings, the 2012 budget deficit is expected to reach just over 8 percent of GDP. The strict framework set by the so-called troika (see Finance)) means that the government has a very limited scope for action. The new crisis budget includes, among other things, a new property tax from June 2013 and reduced child allowances. The taxes on alcohol, and especially on wine, and tobacco are increased, as is the vehicle tax. Registration fees for university and higher education are to be increased by € 250 a year until 2016. MPs also lose the special contribution they received for unforeseen expenses, and the contributions to party leaders are reduced by 10 percent. EUR 10 million would also be invested in granting families standing in residential queues apartments in the so-called “ghost properties” – large private housing complexes built during the success years but which no one has moved into.

Savita Halappanavar, a 31-year-old Indian woman dies at a Galway hospital after being refused medical abortion. The doctors had refused to perform an abortion, as long as the fetal heart was beating, even though it was known that it would not survive and the woman had severe pain (see Social Conditions). In 2010, Ireland was criticized by the European Court of Human Rights for failing to introduce laws that would allow a woman to have an abortion if her life was in danger. However, a ruling in the Supreme Court of 1992 opened to allow abortions in such cases. The criticism is largely about the fact that it is not clear which rules apply (according to an investigation that will be done later, the death should be seen as a medical “accident”).

Outside the Chamber of Deputies in Dublin, several thousand people gathered to protest the country’s harsh abortion legislation. New demonstrations will be held later in Dublin, Galway, Ennis, Clonakility, Kilkenny, Sligo, Limerick, Carlow and Letterkenny. The government is setting up an investigation into how to proceed with the issue of abortion.

The now state-backed bank AIB calls on 15 of its former directors to voluntarily agree to a reduction in their pensions. One former CEO of the bank receives € 529,000 a year, another will receive € 300,000 a year when he turns 65.

The government saves on healthcare

New savings in health care create tension within the government coalition. Health Minister James Reilly has announced that € 130 million will be saved on healthcare, something that Labor is now openly criticizing. However, the IMF proposes that the government should work even harder and lower, among other things, the level of compensation for unemployed and needs-tested child allowances in the 2013 budget. Plans are already underway to introduce a new property tax.

Yes to a new finance pact.

More than 60 percent of Irish people vote in favor of the EU’s new financial pact (see Current policy). Just over half of voters vote in the election.

The Mahont Tribunal states that corruption had been an “ingrained and systematic” part of politics during the 1980s and 1990s. It also criticizes Bertie Ahern who leaves his party after that (see also Political system).

New tax on water is introduced

Protests against the new property tax of € 100 per household are growing as part of the Campaign Against Household and Water Taxes campaign, which started in late 2011. When the last day to pay the tax passes, only half of the fees have come in.