More than three in four working Icelanders work in the service sector, while around one fifth of the workforce is found in industry. A few percent are employed in the fishing industry.

Iceland has traditionally had such a high employment rate that it caused concern when unemployment exceeded 1 percent in the late 1980s. The banking crisis and the subsequent economic downturn in 2008-2010 changed the situation, as the proportion of unemployed rose rapidly to around 10 percent. The Icelandic labor force helped to take the country out of the crisis by refraining from wage increases, pushing out promised wage increases, cutting down on working hours and even agreeing on lower pay in some cases. Between 2007 and 2010, real wages fell by a tenth. Many also lost their jobs. At the same time, income taxes were raised.

Gradually, the employment rate has since increased, to around 4-5 percent in the mid-2010s.

In the coastal fishing communities, unemployment is highest. The move to Reykjavík has also led to higher unemployment there than in other cities. 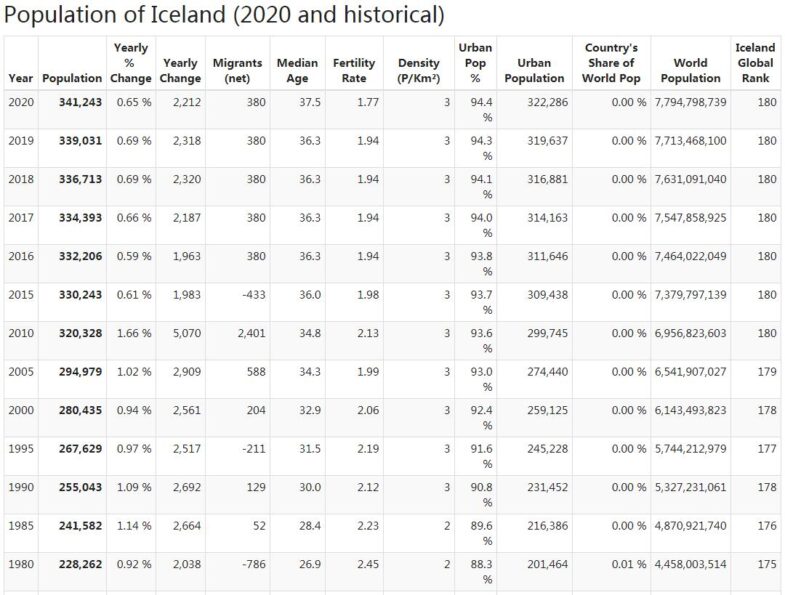 More than four fifths of workers are unionized. The national organization ASÍ is the largest with over 100,000 members, more than half of the labor force in the country.

Independence Party leader Benediktsson is again tasked with trying to form a government.

The Pirate Party also fails to form a government

Even the Left-The Greens fail

Katrin Jakobsdottír, leader of the Left-Green, gives up the attempts to form a new government coalition. Thus, four weeks after the new election, Iceland is still without a new government.

Over 100 Icelanders are being investigated for tax evasion

The Icelandic tax authorities say that 108 Icelanders are being investigated for suspected tax evasion since their name is depicted in the so-called Panama documents.

The Left – The Greens are trying to form government

President Jóhannesson gives Katrín Jakobsdóttir, leader of the Left-Green people, the task of trying to form a new government.

Benediktsson announces that he has not succeeded in forming a government coalition and returns the assignment as government leader to the president. It is mainly the view of the relationship with the EU and fisheries policy that separates the bourgeois parties.

The leader of the Independence Party becomes a government leader

Icelanders go to everything

New elections for everything are carried out. Opinion polls indicate that the Pirate Party will move forward. In the electoral movement, the Pirate Party has promised to work for increased political openness, greater freedom on the Internet, better control of personal data on the Internet and toll-free healthcare for all Icelanders. Shortly before the election, the four opposition parties say the Pirate Party, the Left-Green, the Alliance and the Bright Future, that they agreed to form government if they get a majority in everything after the election.

The independence party will be the biggest in the election

The ruling Independence Party gets 29 percent of the vote and becomes the largest party in the election. The second largest is the Left-Green with 16 percent. The Pirate Party receives 14.5 percent, which is a three times the share of votes as in the 2013 election. The governing Progress Party more than halves and reaches 11.5 percent of the vote. The election result means that neither the four opposition parties nor the two government parties receive their own majority in everything. The turnout will be 79 percent, slightly lower than in the 2013 election. Prime Minister Jóhannsson announces his resignation.

Local authorities announce plans to reduce the capital’s greenhouse gas emissions to zero by 2040. This will be through investments in public transport and electric cars as well as by encouraging residents to walk and cycle more.

New elections will be held in October

The government announces that the new election to everything will be held on October 29 of the same year.

Defense agreement with the United States

Governments in the US and Iceland enter into a new agreement to allow the US troops to be temporarily deployed in Iceland. The reason is increased tensions in relations with Russia, according to representatives of the Icelandic government.

Guðni Jóhannesson, 48, is elected with a clear margin as new president. Jóhannesson is an expert on political history, diplomacy and Iceland’s constitution. He has no pronounced party affiliation and says his highest priority is to restore Icelanders’ confidence in the political system after the crises and scandals of recent years. Jóhannesson formally takes office as President on August 1, 2016.

Gunnlaugsson resigns, the government is reformed

When Gunnlaugsson’s situation becomes untenable, he resigns formally and Jóhannsson becomes ordinary prime minister. The government is reformed with the same parties as before and survives a vote of confidence in everything.

When the Independence Party doubts about continuing to co-operate with the Progress Party, the Prime Minister goes to President Grímsson and asks for everything dissolved, but Grímsson says no. Before that, the opposition in everything has asked for a vote of no confidence in the head of government. In the evening, Gunnlaugsson announces that he is taking “timeout” indefinitely. Acting Prime Minister Sigurður Ingi Jóhannsson will be Minister of Agriculture. The government says that new elections will be held during the autumn.

An international network of burgeoning journalists reveals through the Panama Papers that Prime Minister Gunnlaugsson and his wife have invested tens of millions of dollars in the British Virgin Islands tax haven through a mailbox company. The country’s interior minister and finance minister are also mentioned in the documents. The opposition calls for Gunnlaugsson’s departure and new election, but the prime minister says he intends to remain. Thousands of Icelanders demonstrate outside of everything against Gunnlaugsson’s actions.

Iceland announces that the country has now fully compensated the UK and the Netherlands for the losses in connection with the collapse of the Icelandic Internet bank Icesave 2008.

In his New Year’s speech, the country’s 72-year-old President Grímsson announces that he will leave the post after 20 years as head of state. The presidential change is due in a June 2016 election.