More than half of the adult population is underemployed in Honduras. More than four-fifths of those who work do so in the informal, black sector of the economy, for example with street sales.

In addition to the teachers’ union and the health union, the trade unions are weak. Employees have the right to organize unions, strike and request collective bargaining, but there are several restrictions. Few employees have succeeded in negotiating collective agreements. Since the 2009 coup d’état, the situation for the country’s unions has deteriorated. More and more union members are threatened, registered and countered.

Just over 16 percent of workers were unionized in 2012.

In the economic free zones, trade unions are counteracted and trade unions have been dismissed and blacklisted. In a few maquilas industries, the employees have nevertheless managed to organize themselves, with international support. The working conditions in the free zones are tough. Employees, mostly young women, are often forced to work unpaid overtime. They are harassed by supervisors and risk being laid off if they become pregnant. 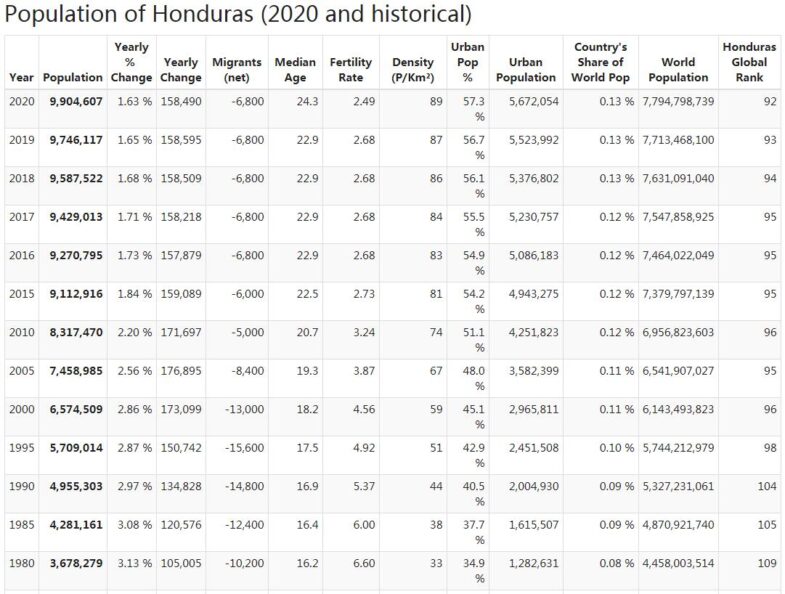 Training effort against the gang

Honduras, El Salvador and Guatemala launch a joint effort to fight gang crime in the countries, called the “Northern Triangle”. Police and military in each country should share intelligence and operate primarily along borders. The force will show the United States that the countries are actively combating violence and smuggling, which is behind a large part of the illegal migration to the United States (see also Foreign Policy and Defense). In 2015, 17,422 murders were reported in the three countries, which are the most violent in the world where there is no war.

Hernández is up for re-election

The president says that he will run for election in 2017 and thereby revitalize the debate on the term of office. A few days later he promises in a speech that he only wants to circumvent the disputed ban on re-election once.

Honduras and Guatemala are the two most dangerous countries in the world for environmental and land activists, reports Amnesty International. They are subjected to threats, false accusations, dirt throws, attacks and even murders, Amnesty notes.

The Supreme Court annulled the Constitution’s ban on re-election. Legislators quickly follow suit and vote against holding a referendum on the issue (see also April 2015). However, the opposition questions the decision and says that the court has no right to decide on the matter. Hernandez has not said whether he plans to run for a new term.

Increased concern about the zika virus.

Six children are born within three days of microcephaly, a birth defect caused by zika (see February 2016), at a hospital in Choluteca near Tegucigalpa. So far this year, nearly 28,000 cases of zika infection have been detected in the country.

Another Copinh activist is found murdered (see also March 2016). Lesbia Janeth Urquía, like Cáceres, worked to stop the Agua Zarca dam and to the privatization of watercourses. She is found dead on a dump, some day after she disappeared. According to the organization Global Witness, over 100 environmental activists were murdered in Honduras in 2010-2015. The murder of Urquía is condemned by the UN, the EU and a number of international organizations.

More and more are fleeing violence

UN Refugee Organization UNHCR reports that more and more people are moving within the country – or seeking asylum abroad – to avoid extortion, threats, sexual violence and forced recruitment that criminal gangs are behind. San Pedro Sula is particularly affected. The problem has increased in 2016 but is not new – between 2004 and 2014, 174,000 Hondurans moved because of the violence.

The Foreign Minister is forced to resign

Foreign Minister Arturo Corrales resigns after being linked to a corruption scandal involving several senior police officers who have ordered the murder of law enforcement officers.

Rafael Callejas (President 1990-1994) admits before a federal court in New York that he received bribes and distributed some to others when he was head of the Honduran Football Association. The indictment has been filed in the context of the widespread corruption scandal at the International Football Association, Fifa. Both charges of fraud and fraud can result in up to 20 years in prison.

Unknown perpetrators enter activist Berta Cáceres home and shoot her to death. A Mexican environmental activist, Gustavo Castro, is injured in the attack. Cáceres was internationally known and a central figure in the movement for the rights of indigenous peoples, involved in the organization Copinh. She had been subjected to death threats and received some protection from the Inter-American Court of Human Rights. Cáceres received the 2015 Goldman Environmental Prize, which is considered the world’s most important prize for grassroots activism. Thousands of people attend Cáceres funeral a few days after the murder which has been condemned in the outside world, by the UN, among others. The United States offers assistance with the murder investigation. Gradually, accusations are growing that the military was behind the murder. Among several people arrested are active and former militants with ties to Desarrollos Energéticos (Desa), the company that builds the hydroelectric dam Agua Zarca, and employees at Desa. Cáceres led a campaign against the dam construction, which is considered to threaten the Gualcarque River, a river sacred to the Lenca people and important for its livelihood.

Mobilization against the zika virus

Around 200,000 Hondurans participate in an effort during one day to try to eradicate the mosquito that carries the zika virus, which is feared to cause, among other things, birth defects and that spread epidemically in Latin America. People try to remove stagnant water in homes and gardens as the mosquitoes multiply by laying eggs in the water. The authorities have declared an emergency permit as around 4,400 cases of zika disease have been registered since mid-December.

Action against corruption and impunity

President Hernández and the OAS sign an agreement to establish a Mission to Support Corruption and Impunity (Maccih). The effort will consist of a foreign group of investigators and prosecutors who will cooperate with the Honduran authorities. The assignment is financed by foreign donors and runs for four years to begin with. Maccih differs from the UN-supported Cicig effort in Guatemala in that it is not given the opportunity to prosecute (see November 2015), and has therefore been criticized by government opponents.