The neighboring countries of Sierra Leone and the Ivory Coast were also thrown into civil wars closely related to the war in Liberia. Several states were directly or indirectly involved in the war in the country. Burkina Faso initially helped build Charles Taylor as the leading rebel leader, while Sierra Leone and Guinea eventually supported groups that fought Taylor. Taylor contributed to the civil war in Sierra Leone through his support for the Revolutionary United Front (RUF). The NPLF was also active in the war in Sierra Leone, and RUF soldiers must have fought in Liberia. Guinea supported LURD, which was to some extent allowed to operate from southeastern Guinea. The Ivory Coast gave strong support to Taylor, as part of the president Félix Houphouët-Boigny’s more or less personal motivated opposition to Doe, and when the NPLF started the rebellion in 1989, it was entering Liberia from the Ivory Coast. Ivory Coast later supported the MODEL group, which participated in the final phase of the war and contributed to Taylor’s fall in 2003.

Around 1990, Libya supported groups from a number of countries to revolutionize West Africa. The Libyan influence on the NPLF was one of the reasons Gambia, Ghana, Nigeria and Sierra Leone were worried about the development in Liberia. Burkina Faso was an important supporter of Taylor, both by connecting with Libya and by training rebel soldiers and importing weapons. Burkina Faso government soldiers also participated in fighting in Liberian territory, on the NPLF’s side.

The civil war in Sierra Leone was triggered by Taylor’s support for Foday Sankoh and the RUF, which started a revolt against the government. Taylor wanted to weaken the stability of the region to strengthen his own position in Liberia while trying to establish economic relations. Sierra Leone was an exporter of diamonds, and diamonds from rebel-controlled areas in Liberia were exported via Sierra Leone, Guinea and The Gambia.

With his control, Taylor was able to exploit Liberia’s natural resources, especially diamonds, rubber and timber, exported over NPLF-controlled ports in Liberia or Ivory Coast. Taylor financed the war through illegal trade and at the same time built up considerable personal wealth. The soldiers, except in the government army, were not paid, and indicated theft and robbery. ECOMOG officers and soldiers also participated in the illegal export of stolen goods, in part in collaboration with the NPLF. When the war in Liberia was over with the 1997 elections, it was still at its most intense in Sierra Leone, where Liberian soldiers were active. When the war in Liberia broke out again in 2002, it was largely due to the war in Sierra Leone. Revolutionaries, mercenaries and fortune hunters from several countries participated in the two wars.

The regional superpower Nigeria played a special role in the war. Both ECOMOG and ECOMIL consisted essentially of Nigerian troops and were often not neutral, rather an instrument for Nigeria. Under President Doe, close relations were developed between Nigeria and Liberia, and Doe was closely associated with Nigeria’s President Ibrahim Babangida. The Nigerian junta feared that a Liberia ruled by Taylor could be a base for destabilizing Nigeria. Similar fears existed in Ghana. President Felix Houphouët-Boigny of the Ivory Coast had a similar double motivation: resisting Nigerian expansion and avenging the killing of the son of President William Tolbert – who was married to the Ivorian president’s family.

Despite the contradictions between Nigeria and Taylor; It was in Nigeria, under President Olusegun Obasanjo, Taylor was granted asylum when he retired in 2003. Nigeria was then criticized for not wanting to extradite him to the war crimes tribunal in Sierra Leone. Behind the regional players were the two major powers France and the United States, which supported the Ivory Coast and Nigeria respectively. 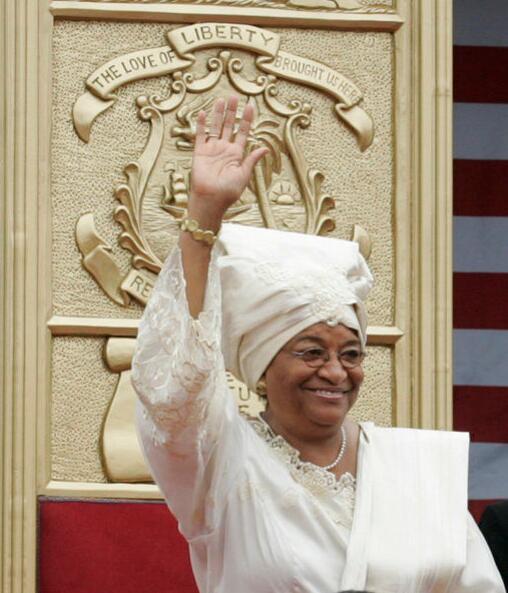 A new transitional government was set up in 2003, with Gyude Bryant as leader. The elections in 2005 were considered a final step in the transition from civil war to democratic governance and peace. Congress for Democratic Change (CDC) got the most representatives in the House of Representatives, while the Coalition for the Transformation of Liberia (CTL) got the most members of the Senate. In the presidential election, 22 candidates voted, of which the two with the most votes went on to the second and decisive round. Initially voted 28.3 per cent of footballer George Weah, who asked for the CDC, and 19.8 percent on the previous finance minister and World Bank official Ellen Johnson Sirleaf of Unity Party(UP). However, the latter won in the second round of elections and became the first elected female head of state in Africa.

In 2008, the president was authorized by the Liberian Supreme Court to appoint local mayors, in the absence of resources to hold local elections, last held in 1985. In 2011, President Johnson Sirleaf was awarded the Nobel Peace Prize. After announcing that she would run for only one term as president, she still ran for re-election in 2011. She was inaugurated for a new term of six years in January 2012, and was elected president for 2018.

In 2003, President Charles Taylor was called upon by Interpol, charged with crimes against humanity and wanted to appear before a special court established in Sierra Leone after the civil war there. In 2005, the UN Security Council decided that UNMIL should arrest Taylor if he returned to Liberia from his exile in Nigeria. Nigeria initially refused to extradite him, but in 2006 issued a request for extradition from the Liberian government, and Taylor was handed over to the Special War Criminal Court in Sierra Leone, SCSL. There were charges raised on eleven points; Taylor did not plead guilty at all. Due to security concerns, the lawsuit was physically moved toThe International Court of Justice in The Hague ; still led by the Special Court.

In April 2012, he was found guilty of all eleven counts, including terror, murder and rape. Taylor was sentenced to 50 years in prison that year. His son, Charles McArther Emmanuel, was found guilty of torture in 2008 in a United States court and the following year sentenced to 97 years in prison. During the war he was the leader of a military unit that committed abuses and human rights crimes. The cases against Liberian war criminals helped raise questions about whether a similar trial should also take place in Liberia.

Liberia opened a Truth and Reunification Commission (TRC) in 2006 to investigate human rights violations during the 24-year period of civil war and unrest in the country from 1979 to 2003, largely modeled by a similar body in South Africa following the apartheid regime.. TRC conducted investigations and recordings in the region, ahead of open hearings that started in 2008. The Commission presented its report to Parliament in 2009 and recommended the prosecution of 200 people, while others should be denied public office. Among these was President Ellen Johnson Sirleaf, who in 2009 acknowledged that she had supported Taylor when he started the civil war in 1989.

When Sirleaf was elected for her second term as president in 2011, the challenges stood in line. Unemployment among the young population became increasingly acute and the country was also put to a hard test when the Ebola epidemic hit in 2014–2015. The outbreak started in neighboring Guinea in December 2013. On March 30, 2014, the first cases were registered in Liberia. According to WHO, 10,675 people in Liberia were infected, of whom 4809 died in the epidemic.

Sirleaf’s successor as president of Liberia was former footballer George Weah. Weah won the second round of the December 26, 2017 presidential election for the CDC party with 61.5 percent of the vote. When George Weah and the CDC took power on January 22, 2018, it was more than 70 years since the last time Liberia carried out a peaceful takeover of political leadership.