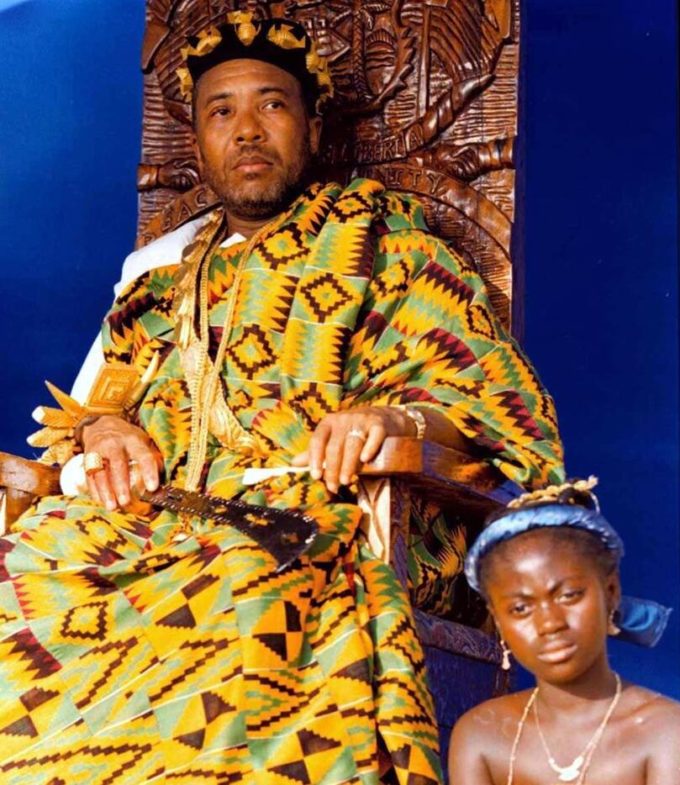 In December 1990, Charles Taylor launched an armed uprising with his National Patriotic Front of Liberia (NPFL) and threw the country into full civil war. In 1997 he was elected president of the country. After a new rebellion against him in 2003, he was forced to step down, and he later lived in exile. The picture shows Taylor on a throne in traditional clothing in 1998, a few months after he was elected president.

The rebellion that was to rule Samuel Doe started Christmas Eve 1989 when hundreds of NPLF soldiers invaded the country from Ivory Coast. In this part of Liberia there was a breeding ground for playing on ethnic strings as a result of growing dissatisfaction with Doe’s unerring rule. Support for the rebellion grew rapidly, which also contributed to the retaliation actions of the Liberian army against the civilian population. Both sides attacked civilians, essentially based on ethnic affiliation, which helped create contradictions that had not previously prevailed in Liberia, but which became an important dimension of the civil war. It would last, with some interruptions, for more than a decade – and spread to neighboring countries.

One reason the revolt developed into a civil war with regional implications was that a number of Liberian factions and several African states participated. The various militia groups that grew up had hardly any political goals; they were essential instruments for warlords with personal power ambitions and the opportunity to enrich themselves. Many of the soldiers were also opportunists, and both military leaders and soldiers often changed sides. The NPFL was split as early as 1990, when Prince Johnson established the Independent National Patriotic Front of Liberia (INPFL). Later, new divisions took place, and a number of groups that partly fought the government of Monrovia and partly each other, grew. The West African Peace Force ECOWAS Monitoring Group (ECOMOG) was introduced in the country in 1990.

The NPLF immediately attacked the peace force, which allied with the INPLF. ECOMOG took control of Monrovia, where INPLF in September 1990 kidnapped President Doe and tortured him to death. Both Taylor and Johnson proclaimed themselves presidents; Taylor created his own administration and government in what he called Greater Liberia; in practice throughout the country with the exception of Monrovia. The first of several ceasefires was signed in October 1990, where the warring parties agreed to introduce civilian rule. An interim government was deployed under ECOMOG protection, led by Amos Sawyer. Taylor did not accept the government, established his own administration in Gbarnga and continued the fight.

A new group, United Liberation Movement of Liberia for Democracy (ULIMO), backed by Sierra Leone, attacked the NPFL from late 1991. In October 1992, the NPLF again targeted a larger attack against Monrovia, which was defended by ECOMOG, while the INPLF collapsed and Johnson sought refuge in Nigeria. The attack marked the start of the second phase of the civil war. A new ceasefire was signed in July 1993, and a new national government and parliament were formed. The United Nations sent the observer force the United Nations Observer Mission in Liberia ( UNOMIL) to assist ECOMOG. In the fall of 1994, the NPLF was attacked by an outbreak group from the organization. New peace talks led to yet another agreement in August 1995 and another new unity government was established, with members from the participating factions – including the NPLF. In doing so, Taylor was also closer to her goal of becoming Liberia’s head of state.

In the 1997 National Assembly and presidential election, Charles Taylor voted for the National Patriotic Party (NPP) and received 75.3 percent of the vote; he was then deployed as Liberia’s elected president. Thirteen parties voted in the parliamentary elections, where the NPP secured a majority in both the Senate and the House of Representatives. Members of rival civil war groups were included in the government, but this did not prevent some continuing disputes.

ECOMOG was withdrawn in October 1999 after the disarmament of the various militia groups. UN observers, UNOMIL, completed their mission the following year. After a few years of relatively stable rule under President Taylor, the civil war broke out again in 2002. Already in 1999, the Liberians United for Reconstruction and Democracy (LURD) movement attacked the government; in 2002, LURD went to the capital, where hard battles were again fought. Also in the first half of 2003 there were clashes in several parts of the country. Under military pressure from the LURD and diplomatic pressure from several countries, new peace negotiations took place in June 2003. Taylor agreed to resign, on condition that new peacekeepers be deployed.

ECOWAS established a new West African force, ECOMIL, and Taylor resigned as president. He left Liberia on August 11, 2003 and went into exile in Nigeria. US warships contributed to the pressure and the deployment of ECOMIL after Taylor left the country. The Peace Force secured a cessation of the fighting between the LURD and the Monrovia government – and the end of the civil war – even though some fighting broke out in the fall of 2003.

The civil war in Liberia was exceptionally brutal and, in particular, went far beyond civilians. The war was to a small extent fought by regular forces, but by militia groups with few trained officers and crews. Many of the soldiers volunteered for reasons of personal revenge and enrichment, some were forcibly recruited – others saw few other opportunities after their villages were destroyed and the family killed. The latter was not least about children; a significant proportion of the soldiers, not least in the NPLF, were child soldiers. They were indoctrinated and baptized and were particularly feared for their loyalty to superiors and to their recklessness. Adult soldiers were also baptized for losing inhibitions, while extensively played on traditional superstition and spiritualism – including for soldiers to think they were invulnerable.

Cannibalism was reported in most camps, where the opponent’s blood was drunk and heart eaten to increase strength. It is estimated that around 200,000 people were killed as a result of the war in Liberia; many completely arbitrary, or because they belonged to a particular ethnic group. In other words, the whole country was affected, with enormous material destruction. About half of the 2.8 million inhabitants fled their homes – either internally or in neighboring countries; especially the Ivory Coast and Guinea.