Data on Haiti’s labor market are uncertain, but unemployment is very widespread, as is the employment rate. More than two-thirds of Haitians of working age are estimated to lack regular employment.

Many survive through relatives or temporary jobs in agriculture. Tens of thousands of people move to the larger cities every year, but few jobs are available. About one million people are estimated to be active in the informal service sector. The majority of the well-educated workforce has left Haiti.

Some hundreds of thousands of Haitian seasonal workers also work in agriculture in neighboring Dominican Republic. Both there and in the Bahamas, the authorities have more than once conducted mass deportations of Haitians without a residence permit.

Unemployment rates vary widely, which is due to both different calculation methods and uncertain bases.

Unions affiliated in the formal sector usually have collective agreements, but the unions have a vulnerable position and union activists risk being dismissed with reference to all sorts of sweeping reasons.

The previously very low minimum wage nearly tripled in the spring of 2009 to 200 gourdes (about US $ 5.50) per day, which, according to entrepreneurs, threatened tens of thousands of jobs. Nevertheless, calculations show that wages were less than 20-30 years earlier. In 2011, the minimum wage was raised to 300 gourdes, but in May 2017, since the gasoline price was raised, many thousands of mainly textile workers went out in street demonstrations to raise the minimum wage to 800 gourdes, when they did not consider themselves able to live on their wages. The protesters also demanded social benefits such as food and transport grants, as well as housing assistance. On August 1, the minimum wage was raised, but only to 350-400 gourdes, depending on work. 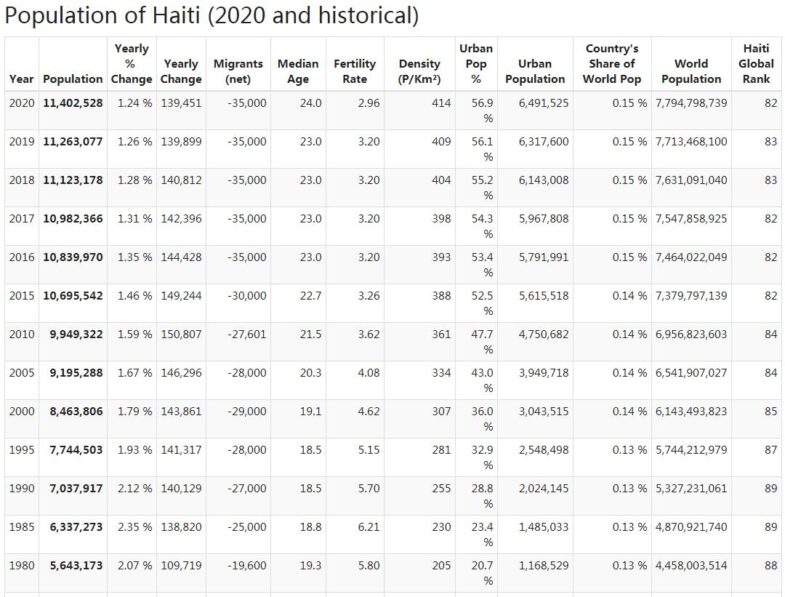 In the important textile industry, around 70 percent of the employees are women, who often have poor wages and working conditions. Child labor is prohibited by law, but not when it comes to housework. Poor families often send their children to work in well-off families in the hope that they will also receive education, which, however, rarely happens. Between 225,000 and 300,000 children (so-called restavèks), usually girls, are estimated to be exploited in this way.

The second round of the presidential election is postponed

Almost one week before the scheduled election date, the Election Council announces that the second round of elections will be postponed due to allegations of irregularities. Several protest actions have been held after the first round of elections.

No decisions in presidential and parliamentary elections

Nearly two weeks after the election, the Election Commission states that Jovenel Moïse and Jude Célestin move on to a second round. According to preliminary results, Moïse received 33 percent of the votes and Célestin 25 percent. The turnout was 26 percent. There is no final result in the parliamentary elections because the second round of elections could not be held in a number of districts. The results available point to a large divide. However, the ruling party PHTK becomes the largest in the Chamber of Deputies. PHTK also won big in the municipal elections and secured more than 30 of 140 mayoral positions, including in Port-au-Prince. But turnout was extremely low. In the capital, the PHTK candidate won with the support of 10,000 voters, of 500,000 potential voters.

The election is conducted without interruption

On Election Day, around 15,000 police and UN soldiers are posted to prevent unrest. The election also runs without incidents. Results are expected to be delayed.

Just over a month and a half after the first round of elections, the Election Commission announces that it will be a second round of elections for almost all parliamentary seats: only eight seats are ready in the Chamber of Deputies and two out of 20 Senate seats. In 24 of 119 electoral districts, the election will be rescheduled from the beginning, due to violence on Election Day in August.

The electoral movement before the presidential election kicks off

When the electoral movement is formally started, 54 candidates will participate. Among them is PHTK’s Jovenel Moïse, a well-known businessman and close friend of Martelly. Jude Celestin (see December 2010 and January 2011) is good at; he is now a candidate for the Alternative League for Progress and Liberation in Haiti (Lapeh). Senator Jean-Charles Moïse from Platfom Pitit Dessalinés also has great support. Maryse Narcisse, Fanmi Lavala’s candidate, is a human rights activist and close ally with Aristide. The disqualification of Verité’s presidential candidate Lumarque (see June 2015) has led to repeated demonstrations in Port-au-Prince and elsewhere.

The first round of elections is carried out as planned. Over 1,800 candidates are up for election in the now 119 seats in the Chamber of Deputies and two-thirds of the seats in the Senate. There are reports of sporadic violence and delays at several polling stations.

Haitians are expelled from the Dominican Republic

Prime Minister Evans Paul warns of a humanitarian crisis since 12,000 people have crossed the border in one week, since the neighboring country threatened with the deportation of hundreds of thousands of Haitian origin people (see Dominican Republic: Calendar).

Approved candidates for the election are presented

The electoral council publishes a list of 58 approved candidates for the presidential election. Among a number of names not approved are former Prime Minister Laurent Lamothe, who was a candidate for Platfòm Peyizan (who replaced Martelly’s former party Repons Peyizan). After a few days, two more names were deleted, including Vérité’s candidate Jacky Lumarque, who, like Lamothe, has not presented documentation showing that they did not embezzle state money when holding political posts. Previously, the electoral council published a list of approved candidates for the parliamentary elections, from a total of 98 different parties. For the first time since the 2004 coup, Aristides party Fanmi Lavala is allowed to stand.

President of France on state visit

President François Hollande visits Haiti, the first French head of state since independence in 1804. He promises $ 145 million in investment but makes no promises of colonial-era compensation, as some Haitians demand. After the liberation, France demanded a great deal of damages to the former slaveholders (see Older history).

The selection date is set

Martelly issues a decree that states that elections should be held in accordance with a proposal from the electoral council. The parliamentary elections will be held in two rounds in August and October, and presidential elections in October and December. The constitution prevents the president himself from running for re-election. Martelly also decides on the division of a constituency, which means that there will be 119 members in the Chamber of Deputies and not 118 specified in the new electoral law.

Several people are injured in connection with demonstrations of high fuel prices in Port-au-Prince. The organizers warn car drivers and say they are out in traffic with danger to their own lives during the two-day protest. Fuel prices have gone down, but protesters are demanding a major reduction given that oil prices have fallen so much.

Martelly lets Evans Paul, a former radio journalist whom he himself nominated in December, swear oath as new head of government. The President promises his detractors that he will form a unifying government within two days. Protesters continue to demand Martelli’s departure.

When the mandate expires for the MPs and for a number of senators, Haiti stands without both parliament (with the exception of ten senators) and the prime minister.

Settlement on election date is reported

Martelly says he reached a deal with a number of opposition leaders to hold elections in the fall. Thus, the acute political crisis would be resolved. But an important opposition party is not on the train: the leftist Fanmi Lavalas, who has been driving the protests against the government.

The message from a New York court regarding the UN’s role in the cholera outbreak is a setback for those who sued the World Organization (see July 2014).