Officially, unemployment is only a few percent, but in practice, many Guineans do not have a job or are underemployed. According to figures from the African Development Bank from 2012, almost one in three young people were missing a job.

Until the 1980s, the state was an important employer. But since then, major cuts have been made in the state administration and about 300 state-owned companies have been privatized or closed down. Reduced opportunities to get a good job have diluted the political turmoil in the country (see Modern History and Current Politics).

Discrimination on the grounds of gender, religious affiliation, political views and disability is prohibited, but the laws are not followed in practice.

Trade unions have traditionally held a strong position in Guinea. For many years, the National Federation of Guinean Workers’ National Federation (Confederation Nationale des Travailleurs de Guinée, CNTG) stood close to the government and had a long monopoly on all trade union activities. 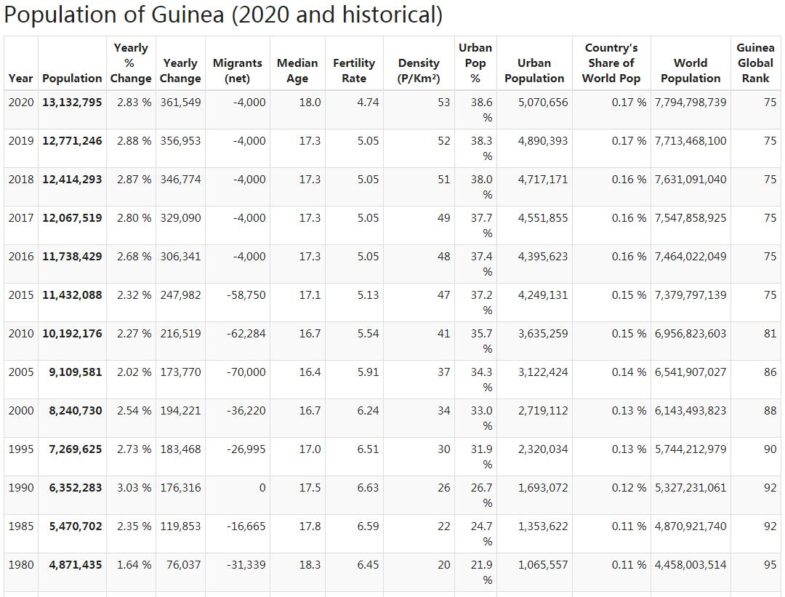 Since 1988, several new unions have been formed. The CNTG and the Guinean Workers Union (USGT) were an increasingly important channel for resistance to the regime in the early 2000s (see Modern History). CNTG mainly organizes public employees, while those working in the private sector belong to the USTG. Soldiers or gendarmerie employees may not be unionized. The larger unions also include the Organization Nationale des Syndicats Libres de Guinée (ONSLG). In 2014, the three largest trade union organizations had a total of about 185,000 members.

The law formally guarantees basic trade union rights but is poorly enforced. The right to strike is enshrined in the law, but exceptions are made for, for example, the military, hospital staff, transport workers and employees on etheric media.

In 2003 Guinea joined the International Convention prohibiting child labor. Despite this, many children work, some as young as five years old. The laws only cover the formal sector of the economy. Most of the children who work are employed in agriculture, with small-scale mining, street trading or polishing shoes. Some rural families send their children to the cities so they can go to school there, many are forced to work for food and shelter. Some girls from poor families work in households under slavery-like forms.

It also happens that adult Guineans are forced to work without pay.

Ebola strikes against the economy

The Ebola epidemic is also hitting the economy hard. The World Bank estimates that the country’s GDP, which grew by just over 4 percent before the crisis, would shrink in 2015.

According to WHO figures, 1350 people in Guinea have fallen ill in Ebola until the end of September, of which 778 have died. But probably more people have been affected. Many people also die in other diseases because they cannot get care or manage to go to health care facilities.

France promises to build more treatment centers in the country to fight Ebola. Cuba and China have also promised help. The United Nations Food Program is also beginning to assist people in Guinea, Sierra Leone and Liberia with supplies. However, the UN has only received $ 250 million of the billion dollars it said is needed to fight the disease. Later, several African create a crisis fund to assist the affected countries.

Following criticism that the Western countries are doing nothing more to help fight the Ebola epidemic in West Africa, France sends 20 experts on emergency medicine to Guinea. They are to have their base in Guinea, but the work applies to several of the affected countries and the measures must be coordinated with local authorities. The US, EU and UK also promise new support.

Unrest erupts in the city of N’Zérékoré after the authorities sprayed the city’s market to fight Ebola. A group of men are reported to have gone to health care workers due to false rumors that the spraying was done to spread the disease. It seems that the number of illnesses is not increasing as rapidly in Guinea as in neighboring Sierra Leone and Liberia.

New measures to prevent the spread of infection

Guinea, together with Liberia and Sierra Leone, decide to block off areas where the infection is particularly widespread. The military and police are to guard the barricades. The treatment units that are inside the blocked off areas will have increased resources.

WHO calls for crisis meeting

The World Health Organization WHO calls for a crisis meeting in Ghana for several countries in the region to agree on measures to prevent the spread of the disease, including opening a special regional crisis center in Guinea. By the end of the month, at least 339 people have died of Ebola in Guinea.

Some 80 people are believed to have died in the infectious disease of Ebola. Most of the deaths have occurred in rural N’Zérékoré, but at the end of the month a case from Conakry is also reported.

At least two people are killed in the middle of the month in connection with protests in Conakry against recurring power outages. The death of a young man at a police station in the city of Fria north of the capital is triggering violent protests at the end of the month.

The new government is ready. President Condé decides via decree that Mohamed Said Fofana may remain as prime minister. 18 of the other ministers may retain their positions in the government, although some may change their responsibilities. Francois Louceny Fall retains his post as Foreign Minister. The government also contains about ten new names, but the ministerial post on religious issues disappears. The EU pays $ 140 million to Guinea, which will go to various development projects. The EU has previously withheld support, pending the parliamentary elections held in autumn 2013.