The government is often difficult to manage to pay wages, which has led to long strikes and other protest actions, especially among teachers and nursing staff. After the 2012 coup, almost all public servants went on strike, to protest that they had not received pay, but also to demand a return to democracy. After the 2014 elections, the government, with the help of, above all, the IMF, began to regulate old payroll debt. 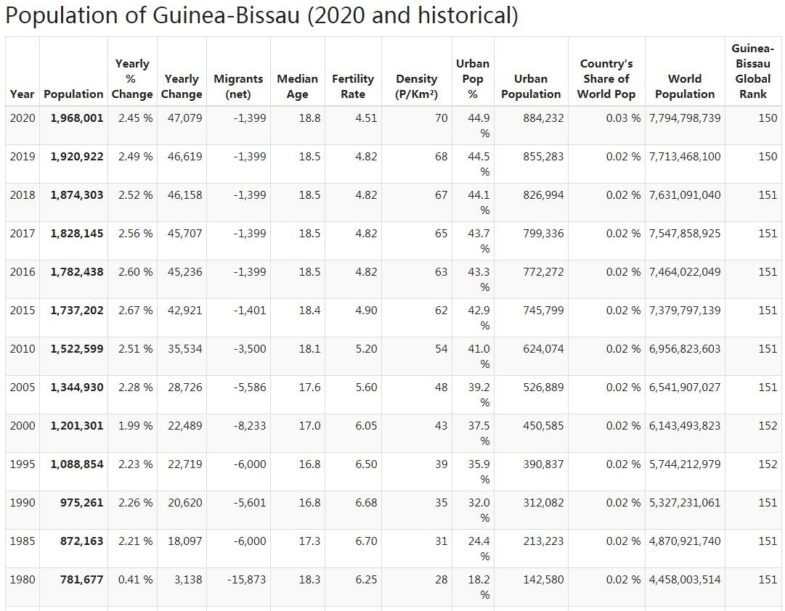 The right to strike is guaranteed in the constitution. Forced labor is prohibited but occurs. Child labor is also common. Children work primarily in agriculture or in street sales.

President José Mário Vaz announces that the parliamentary elections, which should have been held on November 18, will now be released on March 10. He makes the decision via a decree , after being pressured by both the UN and several of the neighboring countries.

The parliamentary elections are postponed until 2019

The election commission CNE announces that the parliamentary elections have been postponed from November 18, 2018 to January 27, 2019. This occurs after problems with voter registration of voters. Up to the end of October, only about a quarter of all voters were registered. As a reason, it is stated that CNE did not receive money for the work on time and that some new electoral equipment was not delivered on time, but also conflicts between the Election Commission, PAIGC and opposition parties on when electoral reforms will be implemented.

Ecowas extends the mandate of the Ecomib Peace Force to September 2019. Ecomib was stationed in the country in 2012 after Guinea-Bissau was shaken by a series of military coups.

Work on establishing new voting lengths takes longer than planned, and the process is extended by one month. This means that it will not be ready for the November 18 elections. This happens after several thousand people have gathered in Bissau to protest against the lack of transparency in how the process is going.

Transport strike is canceled by agreement

The transport strike is aborted since the government and the transport workers union have concluded an agreement. Among other things, the government promises to reduce the number of roadblocks within two months. Roadblocks extend travel time, and drivers often have to pay bribes to pass. Another of the strikers’ demands, to improve the road standard in the country, is not included in the settlement.

A transport strike makes almost the entire country stand still. It is the owners of trucks, taxis and buses who protest against rough roads and that they have to pay bribes to the police.

At least 60 people are feared to have been killed when a fishing boat capsizes in the sea off Guinea-Bissau. The boat can be towed but no survivors are found. The 60 on board are believed to have been migrants on their way to the Canary Islands. The maritime authorities say that no rescue efforts could be made. Coastguard has a number of smaller fast boats, but they can rarely be used due to lack of fuel.

The teachers go on strike

Teachers go on strike in protest of not being paid their salaries and generally poor working conditions. They object to the government not fulfilling the commitments it made in a deal with the teachers’ union 2017.

Strikes among civil servants are canceled

A strike among the country’s 13,000 public servants, which has been ongoing since July 24, is suspended. The UNTG trade union claims to have agreed with the state to raise the minimum wage from 19,000 CFA francs to 50,000 CFA francs as of September 1. At the same time, Prime Minister Aristides Gomes emphasizes that even though the parties have agreed on how the wage increases should be implemented but that negotiations are still ongoing.

A large strike breaks out among public servants who demand more than a threefold minimum wage and better working conditions. It only happens a few days after an agreed National Assembly adopts a new budget, after three years of political crisis. According to the UNTG trade union, the majority of the country’s 13,000 public servants strike. The strike is expected to last for three days.

After more than two years, a new consensus government joins, which is another step in trying to resolve the crisis in the country. It contains ministers from both PAIGC and PRS.

The National Assembly extends its own mandate

Parliament is assembled for the first time in two years and extends its mandate until the November elections (it would otherwise have expired at the end of April. Members also elect José Pedro Sambu as new chairman of the Election Commission.

President Vaz appointed by decree veteran politician Aristides Gomes as the new prime minister. The proposal, presented at an Ecowas meeting in Togo, is to be the result of consultations between the President, various politicians and civil society representatives. Gomes, who belongs to PAIGC, was the country’s prime minister between 2005 and 2007. Vaz also announces parliamentary elections until November 18.

The Ecowas Cooperation Organization imposes sanctions on 19 people, both MPs and close relatives of President Vaz. This has happened since Vaz has failed to break the political deadlock that has prevailed in the country since 2015. The 19 are now being banned from travel and they have their assets frozen. Eight of the designated MPs belong to a group of 15 PAIGC politicians who broke up with their party, and six belong to the opposition party PRS who supported the president in the conflict. Others belong to the closest circle around the president, including his son.

President Vaz, by decree , appoints former Foreign Minister Artur Da Silva as new prime minister. He, who, like Vaz, is a member of PAIGC, gets one of his first assignments to announce new elections in the spring.

Former Prime Minister Carlos Gomes Júnior returns to his homeland from exile in Portugal. Many of his followers gather singing at Bissau Airport to welcome him home. He says he has returned to Guinea-Bissau to work for reconciliation and to find a way out of the protracted political crisis. Gomes Júnior was forced to retire after a 2012 military coup.

Prime Minister Umaro Sissoco Embaló submits his resignation, in an attempt to resolve the political crisis. He says that without the president’s support, he cannot remain. Ecowas has threatened to impose sanctions on Guinea-Bissau if the country cannot lift the political deadlock that has prevailed in the country since 2015 (see December 2017).