The official unemployment rate is low, but many are underemployed. In addition, a majority of the working population live outside the formal economy. Guatemala has been described as the most dangerous country in the world for union activists and the percentage of union members amounts to just one percent.

The proportion of the working population employed in the informal sector is estimated at 70 percent. Roughly every third person works in agriculture, and the proportion of those without formal employment is even higher.

Child labor is common, mainly in agriculture but also with things like street sales, shoe shoveling and simpler industrial jobs. Sometimes pure forced labor is revealed where teenagers work up to 16 hours a day.

In the age group 7 to 14 years, more than one in ten children work according to official data. It appears that five-year-olds and even younger children are forced to work, including picking coffee beans.

The right to form trade unions is guaranteed by law to all but military and police. Discrimination on the grounds of union activity is prohibited. But the protection of the employees is weak and union activists are subject to harassment and violence which is sometimes fatal. Between 2014 and 2018, 90 union activists were murdered, according to the international trade union organization IFS. The murders are in principle never resolved. In addition, many have been tortured, kidnapped and threatened with life. Behind the violence are representatives of both business and politics, although it is usually exercised by corrupt police or former members of self-defense forces. 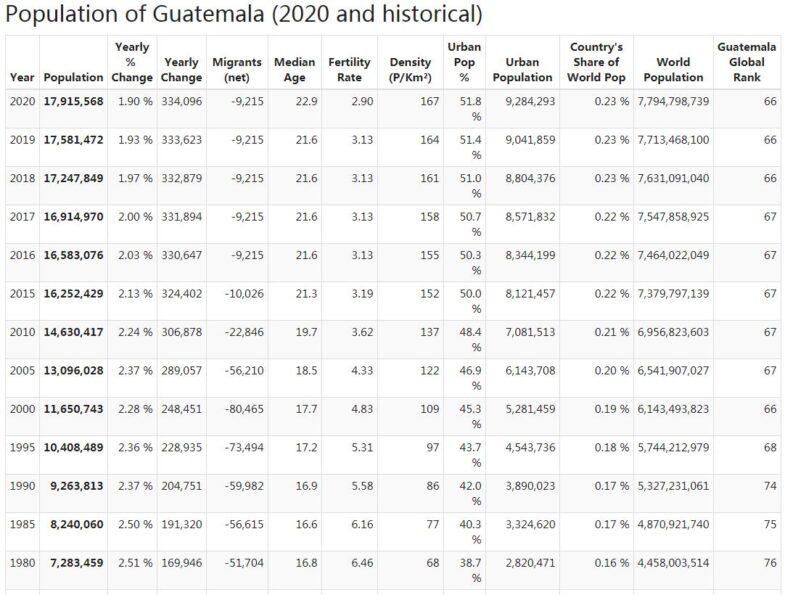 In addition to murder and assault, common crimes include mass shootings, blackmail and refusal to negotiate. Guatemala is described by IFS as one of the ten worst in the world for working people. The organization places it in a category of countries where there is no guarantee of union rights at all, the lowest of five categories that measure union rights.

The difficult conditions for trade union activists have contributed to an already low membership rate falling below 2 percent. Among formal employees, the figure is around 8 percent. Most of the active unions are in the public sector.

By law, there is a 48-hour working week, but many work more without extra compensation. This is especially the case in rural and remote assembly plants (maquilas), where the employees depend on employers to get to and from work. Most of the employees at the assembly plants are women and many of them are indigenous people and lack education.

There are three IFS affiliated central organizations in Guatemala.

Jimmy Morales wins the second round of the presidential election by a wide margin. He gets just over 67 percent of the vote against just under 33 percent for Sandra Torres, who admits being defeated before the voting is completed.

A few days before the October 25 election, both candidates, Jimmy Morales and Sandra Torres, sign an agreement on transparency to show that they are serious about fighting corruption. Morales, who leads in opinion polls, has no political experience and during the election campaign marked a distance from the political establishment. However, a human rights group has warned that his party’s FCN was founded by military veterans and that it could affect the work of bringing militants to justice for crimes committed during the civil war.

President Maldonado announces three days of mourning since a residential area near Guatemala City was buried in a landslide. Up to 500 people are feared to have died in the landslide.

Newcomer wins in first round

In the first round of the presidential election, a new addition is victorious among presidential candidates, Jimmy Morales, who is supported by nearly 24 percent of voters. It is very even in terms of who becomes Morale’s challenger in the second round. Only after a week or so does it become clear that UNE’s Sandra Torres (ex-wife of ex-president Álvaro Colom) has received significantly more votes than Líder’s Manuel Baldizón, who has long led in all the measurements. Jimmy Morales is an actor and comedian who is known for a TV role where he played a cowboy who accidentally became president. He has sailed for a short time as a leading candidate. Morales presents himself as an “anti-establishment candidate”, with a message about the fight against corruption and poverty. But his FCN party is associated with the traditional establishment in Guatemala, and not least with the military. The FCN was founded by members of the veteran association Avemilgua. Members of Avemilgua have testified in favor of Ríos Montt, the ex-dictator, and a former party spokesman is now imprisoned former police chief Pedro García Arredondo (see August 2012 and January 2015). In the contemporary congressional elections, the FCN receives only 11 seats and thus becomes dependent on cooperation with other parties. Largest will be Líder with 44 seats while UNE gets 36, Todos 18, PP 17 and the other 32 seats go to small parties.

The President resigns and is detained

President Otto Pérez Molina resigns and is taken into custody later in the day. Alejandro Maldonado Aguirre takes over the presidential post (see May 2015). Two days earlier – and just five days before the forthcoming election – Congress has voted with good margin to waive Pérez Molina his immunity from prosecution. The decision was also supported by PP members. On September 2, the state prosecutor issued an arrest warrant and the Constitutional Court rejected the president’s appeal of the alleged prosecution immunity.

Cicig accuses the president of bribery

The political situation becomes increasingly dramatic as the UN-backed anti-corruption commission Cicig goes one step further and directly accuses President Otto Pérez Molina and the already dismissed Vice President Roxana Baldetti of having played prominent roles in the “La Línea” scandal. The Supreme Court re-orders Congress to consider lifting the president’s indictment. Congress has recently voted against doing so, but now comes a new request because of the new information.

Additional ministers are forced to step down

The Minister of Agriculture and the Minister of Health are leaving their posts, and thus a total of eight members of government have resigned because of the corruption scandals that have rolled up. President Otto Pérez Molina continues to reject all proposals that he should resign. In a televised speech, he denies the accusations that he himself received money through the customs fraud. The popular protests continue with demands for Pérez Molina’s departure.

The former vice president is arrested

Former Vice President Roxana Baldetti is arrested, just over three months after her departure (see May 2015), at a hospital in Guatemala City where she was hospitalized for unclear reasons. A total of almost 30 people have now been arrested in the customs settlement called “La Línea” (the line, following a telephone line used by those who wanted to avoid import taxes). Baldetti’s adviser Monzón Rojas has been designated as the brain behind this, but according to state prosecutor Thelma Aldana, both Baldetti and President Otto Pérez Molina are included in the picture.

The President may lose prosecution immunity

The Constitutional Court provides the clear sign for Congress to lift the president’s prosecutorial immunity so that the suspicions of corruption against him can be investigated. The Supreme Court in June ordered Congress to investigate the suspicions, but that decision was then appealed to the Constitutional Court. The investigation has been requested by the Mayan party Winaq, which is led by peace recipient Rigoberta Menchú (see Modern History). According to Winaq’s request, Pérez knew of the cheating both within SAT and IGSS (see April and May 2015). President Otto Pérez Molina denies all charges and says he does not intend to resign.

Cops are suspected of journalist murder

Three people, including two police officers, are arrested on suspicion of murder of two journalists (see March 2015). The police were part of a unit whose job was to protect journalists. One of the journalists had reported a mayor for the death threat.

Protesters demand the resignation of the president

Tens of thousands of protesters take part in new protest marches against the government around the country. The demonstrations have been held on several occasions in the past and demands are now being repeated for the president to resign. But Otto Pérez Molina insists that he intends to remain in office until January 2016.

The arrest after revealing a new bribe

The government is facing yet another severe setback when the UN-supported Commission Cicig and the Prosecutor’s Office issue arrest warrants for 17 leading persons at the Social Security Institute IGSS. Among those now arrested are the country’s central bank governor and IGSS governor, who is one of President Otto Pérez Molina’s closest allies and who has also been his private secretary.

Shortly thereafter, the newly appointed Minister of Energy, the Minister of the Interior and the Environment Minister may also go, all because of suspicions of corruption that are not directly related to the SAT.

The Constitutional Court gives Congress clear signs to investigate whether Vice President Baldetti’s prosecution should be revoked as a result of the corruption scandal that broke out three weeks earlier. Later that day Baldetti leaves. A week later, a former chief judge of the Constitutional Court, Alejandro Maldonado Aguirre, is appointed new vice president.

Power jump from the government party after bribe disclosure

Three days after the revelation of an extensive bribe with wires in the government, the ruling party leaves the PP’s presidential candidate for the September elections, Alejandro Sinibaldi. He also leaves the party. The same goes for a number of mayors and members of the council who have sought re-election for the PP in the municipalities. Some of them go to Líder or UNE.

Tax executives are being arrested in a large bribe

The current and former head of the SAT tax authority and 19 other persons are arrested, suspected of serious tax violations. This has been revealed in an investigation by the UN-supported Commission Cicig and the Prosecutor’s Office. They state that suspicion arose when it emerged that SAT had not found a single case of tax fraud in two years. The arrested are believed to have received bribes to allow companies to avoid paying customs duties on goods imports. In total, at least 50 officials and private individuals are reported to be suspicious of this. Among them is Vice President Roxana Baldetti’s former private secretary Juan Carlos Monzón Rojas. He is in South Korea with Baldetti when asked to be arrested, and does not return to Guatemala but is called for by Interpol. Monzón was previously arrested for car theft and punished for disobedience and negligence in the service when he was an Army officer. He surrenders six months later to the authorities in Guatemala City.

A series of attacks against journalists in the department of Suchitepéquez raises concerns about increased political violence ahead of the September elections. Two journalists are shot dead and a third wounded in an attack on a group of journalists in a square in Mazatenango. Three days later, a cameraman is shot down in Chicacao. A total of 21 attacks have been reported so far during the year.

Ex-President Alfonso Portillo is released from prison in the United States after serving his sentence (see May 2014), and returns to Guatemala where hundreds of supporters turn up at the airport.

Former police chief Pedro García Arredondo is sentenced to 40 years in prison for assault against Spain’s embassy in Guatemala in 1980, which claimed the lives of 37 people. The police raided the embassy stormed by activists, who wanted to alert the outside world to the regime’s repression. A fire broke out at the operation and García Arredondo ordered the police to prevent people from leaving the building. He has previously been sentenced to 70 years in prison for torture (see August 2012).

The trial of former dictator Efraín Ríos Montt resumed (see May 2013). However, the negotiations are immediately postponed with reference to the fact that one of the judges is not considered impartial.