Almost one fifth of Ghanaians are employed in the formal labor market. Within this group, 42 percent is estimated to work in agriculture, 43 percent in the service sector and 15 percent are found in industry (2010; newer data missing). Most residents grow mainly for self-sufficiency and are outside the formal economy.

In 2013, unemployment was reported to be just under 5 percent, but in reality it is believed to be significantly higher. However, there is no secure information.

Among those who have formal employment, the degree of organization is high. The trade union movement is more influential than in most African countries and it played an active role during democratization in the early 1990s. Unions can operate freely, but must register with the authorities.

The largest central organization is the Ghana Trades Union Congress (GTUC), with 275,000 members in 17 different unions. GTUC used to be closely linked to the political leaders, but is now independent and is often in opposition to the government. The largest trade union, the teachers’ union National Ghana Association of Teachers (Gnat), is not a member of GTUC.

Although the right to strike is limited by a labor market law from 2004, strikes are not uncommon. In recent years, however, the climate against trade unions is reported to have intensified, for example strikes may be met by police violence. 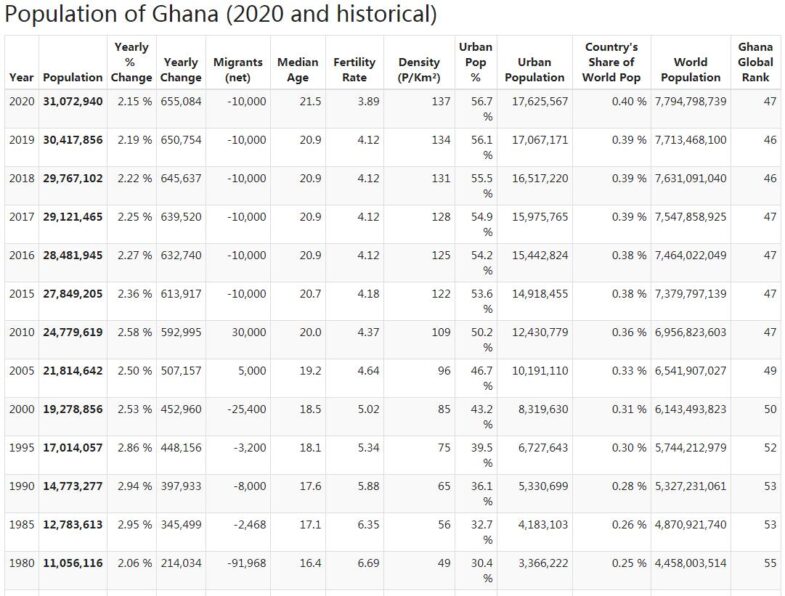 Child labor is common in Ghana, which has not signed the ILO International Convention on the Prohibition of Child Labor. Forced labor and slavery also occur, especially on cocoa plantations, on fishing boats, in gold mines and among domestic workers. According to a study from Tulane University in Louisiana in the United States in 2014, 42 percent of children among cocoa-eating families in Ghana (and Ivory Coast) perform “dangerous work” in the fields. The government is trying to overcome child labor through legislation and compulsory schooling.

Ghana is one of 44 countries to sign a Free Trade Agreement at the African Union Summit in Rwanda. The agreement must be ratified at the national level before the AFCFTA free trade area can become a reality, but it is seen as a historically important step towards increased trade exchange within Africa.