Developments in the German labor market have been bright during the 2010s. Unemployment is relatively low, among young people it is among the lowest in Europe, and wages have risen. But it is also a problem that many immigrants with immigrant backgrounds are outside the labor market.

That the high unemployment figures after the reunification in 1990, which culminated in the mid-1990s, in just a decade, have fallen so sharply has been called “the German job miracle”. Assessors believe that this is a consequence of the, often politically contentious, labor market reforms implemented in the early 1990s. Then flexibility in the labor market increased, new jobs were created and it became easier to get temporary jobs. At the same time, laws were passed that made it more difficult for the long-term unemployed to refuse a job while the unemployment benefit became less generous. Almost three-quarters of the labor force currently works in the service sector, one-fourth in industry, while only two percent work in agriculture. Forecasts show that the working population will gradually decline over the coming decades as a result of low population growth.

In the fall of 2018, the government agreed on a new strategy to counter the shortage of skilled labor in the country. Among other things, it would be easier for citizens of non-EU countries to work in Germany for six months, provided they speak German. In addition, migrants who have been denied their asylum applications could, in certain circumstances, remain in the country if they have a job.

Unemployment is still higher in the eastern part of Germany than in the west. Wage levels have also often been lower in the East, which meant that salaries, for example, in restaurants there had to be increased by 10 percent to reach the country’s minimum wage introduced in 2015 of EUR 8.5 per hour. 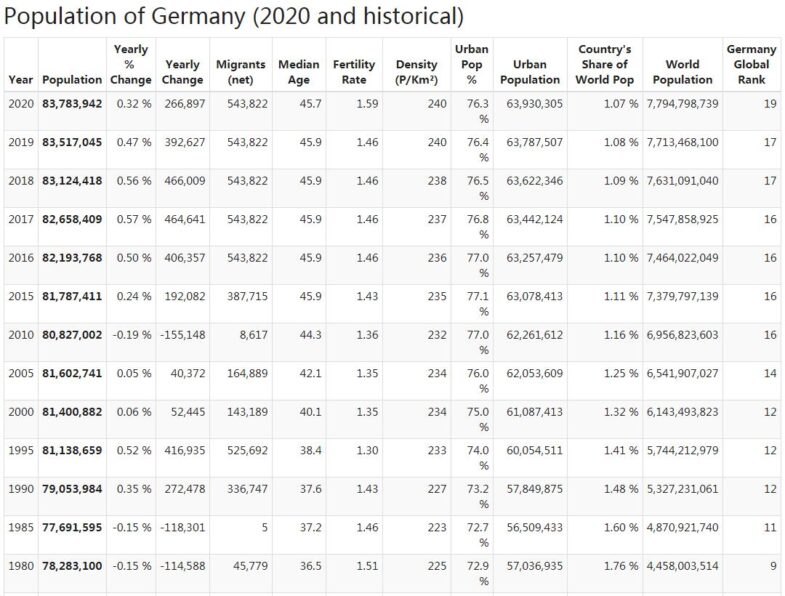 The German unions are still considered to be strong internationally, but they have lost many members. The Deutscher Gewerkschaftsbund (DGB) is the largest trade union central organization with about six million union members. The largest associations within DGB are IG Metall for the engineering industry and the civil society association Vereinte Dienstleistungsgerekschaft (ver.di), which was formed in 2001 through a merger of several unions. Both of these unions have just over two million members. The second largest central organization is the Deutsche Beamte Bund (dbb), with some 40 associations mainly in the public sector.

Expulsion of Afghans despite protests

Germany sends back 27 Afghan men to Afghanistan. 17 of the men have been convicted of a crime. Demonstrations have been held in protest of the decision. Many believe that the situation in Afghanistan is not safe for those who are returning. Germany began sending back Afghans who had not received asylum a year ago, after an agreement with Kabul.

A majority of participants in a SPD meeting voted in favor of opening negotiations with the Christian Democrats to re-form a large government coalition. The talks will start soon.

Chancellor Angela Merkel and the Christian Democrats of Bavarian leader Horst Seehofer begin talks with SPD leader Martin Schulz to form a joint government. After the SPD’s defeat in the September elections, the party made it clear that it did not want to be part of a new big coalition with the Christian Democrats. But after the negotiations between CDU and FDP burst a week ago, the pressure on the SPD to change has increased. Not least with the threat that new elections must otherwise be held.

After four weeks of intense discussions with Merkel’s Christian Democrats and the Greens, liberal FDP withdraws from attempts to form a so-called Jamaica coalition, which it is called considering that the colors of the parties – black, yellow, green – are consistent with Jamaica’s flag. Parties have found it difficult to agree, especially on asylum policy and tax issues. They also have different views on environmental policy. The Greens have wanted to phase out the use of coal, while the Christian Democrats and the FDP have prioritized job issues and industry conditions.

Turkish President Recep Tayyip Erdogan urges Turks living in Germany not to vote for any of the parties in the German government in the upcoming elections. He thinks that the government parties, like the Greens, are “enemies of Turkey”. The play is condemned by German Foreign Minister Sigmar Gabriel, who calls it interference in Germany’s internal affairs.

Angela Merkel said in a radio interview a couple of days after the formal election campaign started that there are no plans for government cooperation with any other party. Since there are “no natural coalitions, everyone is now fighting for themselves,” she says.

Islamist motives are suspected in the act of stabbing

A 26-year-old Palestinian stabs a person to death and injures six others at a supermarket in Hamburg, before being broken down by private individuals at the scene. The man who was recently denied his asylum application is said to have been radicalized a short time before the act. There is nothing to suggest links to any Islamist group, but the attack gives fuel to the asylum debate, two months before the election to the Bundestag.

In a newspaper interview, Finance Minister Wolfgang Schäuble accuses Turkish President Recep Tayyip Erdoğan of endangering the multi-hundred-year relations between Germany and Turkey. This after Erdoğan raged against Berlin following German criticism against the arrest of several German citizens – including several human rights activists – in Turkey. A few days earlier, Foreign Minister Sigmar Gabriel warned German companies to invest in Turkey and talked about a “review” of relations between the countries.

Claims before and during the G20 meeting

Around 500 police officers and an unknown number of protesters are injured when riots erupt during the evening and night of July 7 in Hamburg, where G20 leaders will meet July 7 to July 9. Around 12,000 people take part in the demonstration held in protest of the G20 meeting and which becomes violent when police block off some of the city’s streets. Cars are set on fire and windows are smashed. The demonstration is held under the slogan “Welcome to Hell”. On the morning of July 7, the authorities face a ban on spontaneous public gatherings. However, violent demonstrations are also held over the weekend and a total of more than 140 people are arrested.

The German Confederation Day decides to introduce same-sex marriage. 393 members voted in favor of the proposal, while 226 voted no – including Angela Merkel herself. The CDU’s coalition partners in the government SPD have long sought for such a law to be introduced and also wanted to exclude future government cooperation if a change does not occur. Germany is one of the last countries in Western Europe that approves of gay marriage.

After meeting, among other things, US President Donald Trump during the NATO Summit in Brussels and at the G7 Summit in Sicily, Angela Merkel says: “The times when we could totally trust others are on their way out. I have experienced that in recent days. ” She is referring to the relationship with the United States.

Merkel’s Christian Democrats get almost 34 percent of the vote, thus taking power in the largest German state that has been an SPD stronghold for many decades. The SPD receives about 30 percent of the vote, which is a sharp reduction compared to 2012 when the party received 39 percent.

CDU wins the election in Saarland

The party gets about 40 percent of the votes in the state election, compared to about 30 percent for the SPD.

Martin Schulz is elected new party leader for the SPD and thus becomes Angela Merkel’s main competitor for the post of Chancellor.

Several German cities refuse to allow Turkish ministers to hold elections there before a referendum in Turkey to strengthen the president’s power. The Turkish regime wants support from Turkish citizens living in Germany. Decisions to say no to the campaign meetings result in Turkey’s President Erdoğan making comparisons with Germany during the Nazi era (see Turkey: Calendar). Angela Merkel responds by calling the accusation “absurd”.

the 12th of March

The Social Democrat and former Foreign Minister Frank-Walter Steinmeier are elected new president by the Federal Assembly. He will take office on March 19.

The SPD changes leaders before the election

Sigmar Gabriel chooses to leave the party leader post in favor of party colleague Martin Schulz, former President of the European Parliament. According to Gabriel, Schulz has more chances than he himself to challenge Angela Merkel in the September 24 parliamentary elections.