Liberia consists mostly of bedrock ( gneiss and granite ), with tertiary sandstone along the coast.

The coastline is about 570 kilometers long, and is characterized by a number of lagoons and estuaries, covered by dense mangrove scrub. The low coastal plain extends 30–50 kilometers inland, and is mainly covered by savanna. The plain countryside is gradually being transformed into low, rainforest- covered plateaus and highlands that cover most of the country. 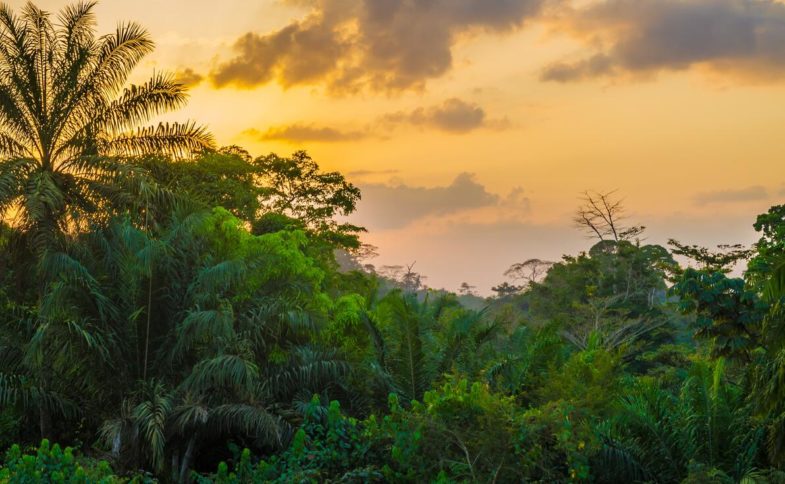 Liberia has humid tropical rainy climate without any pronounced dry season. Most precipitation falls in the summer, at the coast 500-750 millimeters in July, below the tenth of this in January. The annual rainfall is usually 3000–4000 millimeters, somewhat less in shielded inland areas. The annual average temperature is around and partly just over 25 ° C, with little difference between the warmest and coldest months.

Plant and Wildlife in Liberia

The vegetation consists essentially of tropical rainforests with savanna in the north and mangrove forests along the coast.

The mammalian fauna includes 193 species. The stock of large mammals has declined, but there are still leopards and one of the last significant populations of forest elephants. In the rainforest live dwarf hippopotamus, small antelope, shellfish and a variety of rodent and bat species. Among the primates can be mentioned chimpanzee, dianamarecat and red colobus. Nearly 700 bird species have been recorded. Characteristic families are pigeons, turacos, cuckoos, icebergs and sunbirds. Rich reptile and amphibian fauna with 79 and 32 species respectively. Crocodiles, several viper species and cobras are common, as are scorpions.