The country consists of the Jutland peninsula (29,633 square kilometers), divided across the Limfjord, and about 500 larger and smaller islands.

The largest islands are Zealand, Funen, Lolland, Bornholm, Falster, Langeland, Als and Møn. Denmark is bordered by the sea, and nowhere is more than 52 kilometers from the nearest coast. In many places the coast is protected from the sea by dikes. Denmark’s only national border is the 67.6 kilometer long border with Germany in the south. The large number of islands and the heavily cut east coast of Jutland provide a very long coastline (7300 kilometers) relative to the land area. 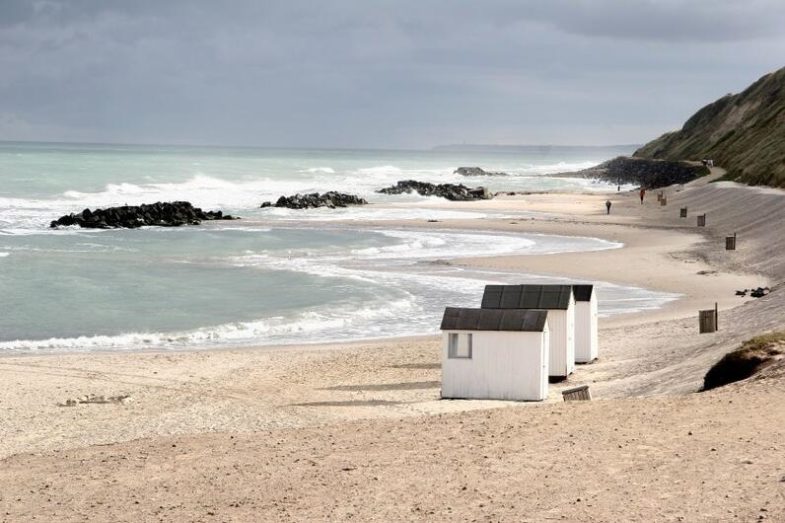 Denmark can be geographically divided into 3:

The surface shapes of the release material determine the appearance of the country. These forms are due to the glaciers directly, the glaciers and later the work of the sea and the wind. Along the said line, the ice edge was well below the last ice age maximum. It is therefore called the main residence line. In addition to the old, leveled moraine hills from the last ice age, the glacial streams flowed and deposited the associated sandy material in the lowest parts of the old moraine surface. These large smooth sandy plains make up the so-called moorland plains, formerly covered by heath vegetation, now mostly cultivated and planted with woodland, especially spruce (plantations).

To the east of the main residence line there are young hilly landscapes. These are partly moraine plains, but more pronounced are the corrugated moors, end morons and the like in very marked, elongated ridges or uncluttered high slopes with relatively deep depressions in between. The course of the meltwater rivers below and in front of the ice lies today as valleys and fjords in this landscape, which is rich in rivers and lakes. In some places, the glacial rivers have deposited sand and gravel in long ridges ( boxes ), and there are bedrock clays in lakes that the ice clogs up. These forms are characterized by more limited parts of the land surface. In a tunnel and meltwater valley system in the moraine hills in this area flows Denmark’s longest river, Gudenå, 158 kilometers long, with many beautiful lakes.

When the ice melted away from Denmark, large parts of Jutland’s northern part (Vendsyssel) were flooded by the sea, and the highest parts of the moraine hills rose like islands. Later, during the Stone Age ( tapes, littorina time), the sea re-entered northern Jutland. It then did not reach as high, but had a greater distribution to the south (also south of the Limfjord). Old beach ramparts are available in long series. On the coasts and on the moorlands the wind has formed dune landscapes, especially known is the sand dunes of the west coast. At the distant sea, the sand dries and peaks inland. This sand escape still often takes longer than the dunes, but is almost stopped by planting bush pine and mare straw.

The coast of West Jutland is smooth with a low beach, and it is shallow, often with reefs outside. Farther south are larger marsh areas. Here, efforts are being made to acquire new land by means of suitable plants and by digging dikes, to ensure the sludge that the sea brings in at high tide. Otherwise, there are sandy beaches and dunes. Within these are some large lakes, such as Ringkøbing Fjord and Nissum Fjord, separated from the sea by the dune range that reaches considerably higher than the land within.

The coast is dangerous for ships, especially in onshore weather. Natural ports are not found on the outer coast. The most important port city is Esbjerg within Fanø. Otherwise, channels have been made through the dune zone to the beach lakes (Ringkøbing), or you have built pier for protection (Hirtshals. The inlet to Nissum Bredning and the Limfjord from the west has changed, and has been a constant problem. Most good harbors and major coastal cities in Denmark are located further east, in the Limfjord area, on the east coast of Jutland and on the islands. The coast here is severely cut. This is because the sea goes over the uneven moraine land that the sea has not been able to plan other than in the small. The fjords on the east coast of Jutland are formed by the sea entering old tunnel valleys (see above). Some coves are demarcated from the sea, for example Lammefjord in northwestern Zealand, which lies in a lowering surrounded by endemore ramparts on three sides. One feature of the coastal image that must also be mentioned is the cliffs, the high steep cliffs facing the sea. Often the waves have excavated these in loose material (moraines). However, they are particularly beautiful where they are excavated in Chalk Mountains, such as Møns cliff (143 meters high) and Stevns cliff in the southeast.

Denmark has a temperate coastal climate with mild winters and relatively cool summers. The country lies in the West Wind Belt, which means that west and southwest winds are prevalent. The differences between summer and winter temperatures are relatively small; the greatest difference is found in eastern Denmark, which has more “continental” climatic conditions than the western parts of the country.

The driest is the area of ​​the Great Belt and the Samsø Belt, which receives less than 500 millimeters of rainfall per year. For the whole country, August is the most rainy month, while spring is the driest period.