Employment in the private sector has increased, but is not enough to provide employment for the large number of young people coming into the labor market every year. Unemployment therefore rises year on year. There are no reliable figures on how many people do not have work; unemployment was estimated at 20 percent in 2014 by the IMF, but is probably much higher.

During the boom, the country has often experienced a shortage of labor, especially in less attractive industries. The need has been met by immigration of guest workers. Unfavorable attention has been paid to Gabon for trafficking in children from poorer countries in West Africa in order to obtain cheap labor (see Social Conditions).

For those who have a formal employment, there are social benefits, such as maternity leave, child allowance and paid vacation. Between 2006 and 2010, the minimum wage was raised from USD 155 to USD 285; during the strikes in 2015, the unions demanded a raise to almost US $ 500, as well as a review of the pension system. The government, which has seen government revenues decline due to falling oil prices, responded by offering a new pay table.

According to the existing labor legislation, the weekly working time is 40 hours. Guest workers and illegal refugees are generally not covered by any safety nets. They often get to work longer days and get paid less than others. 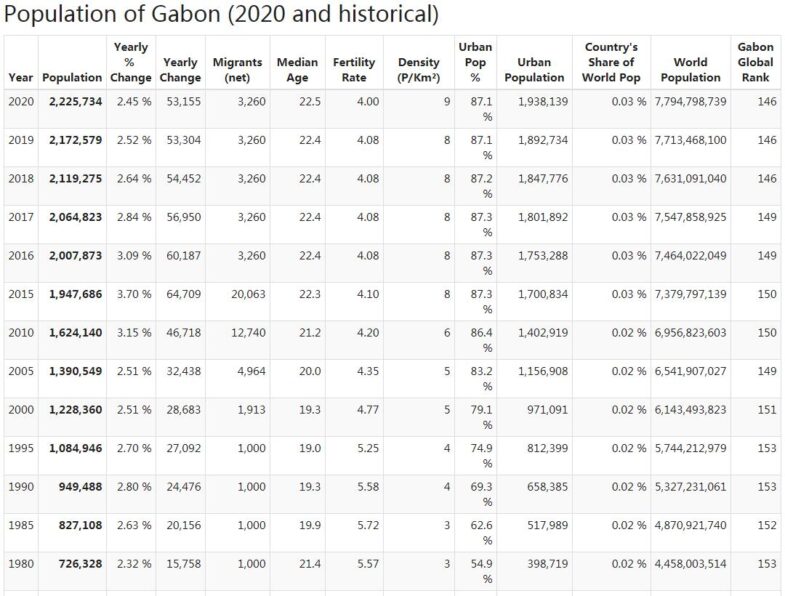 There are two major trade unions: the regime-loyal Cosyga (Confédération syndicale gabonaise) with nearly 23,000 members and the fast-growing CGSL (Confederation gabonaise des syndicats libres) with about 19,000 members. In addition, an independent central organization for public employees, including teachers and healthcare staff members (Cosynap, Confédération de l’administration publique) and the oil workers have their own union, Onep (Organization national des employés du pétrole). Most of the employees are members of the union, who have a relatively strong position and many times have forced the government to give up after extensive strikes and other protest actions, even though the strike right is severely restricted. Among other things, Ali Ben Bongo’s government has been forced to subsidize bread prices, impose price hikes on certain goods and reduce taxes. Extensive strikes in 2014–2015 put additional pressure on the government.

Local elections are conducted throughout the country. The ruling party PDG takes a clear majority of the places that are at stake but are forced to cooperate with an opposition party and independent members in the capital Libreville.

Thousands of people protest in the capital Libreville against the large number of ritual murders discovered during the year. About 20 people are estimated to have been killed and body parts believed to possess magical powers have been cut away. Often the truncated bodies have been found on beaches. The official demonstration is led by President Bongo’s wife, but in the past the government has been criticized for not trying to do anything about the problem. An alternative demonstration is dispelled by police with tear gas and several people must have been arrested.