Unemployment is high in Ethiopia and underemployment is high. A majority of Ethiopians earn their living outside the formal labor market, in self-catering rural areas or by working as a street vendor, for example.

Actual unemployment is expected to be significantly higher than official figures show (see Facts box). At the same time, there is a large shortage of qualified professionals. One reason is that many highly educated have moved abroad, for political or economic reasons.

Most employees have the legal right to form trade unions. Exceptions are made for some civil servants, such as judges and prosecutors. Some, including teachers, do not have the right to sign collective agreements.

In practice, trade unions are weak and the proportion of employees who are union members is very low. The EPRDF government is described as hostile to unions and many union leaders and members have been harassed, beaten and imprisoned over the years. The reform policy that was initiated in the spring of 2018 (see Current Policy) has raised hopes of increased freedom for the trade union movement, but no major changes have yet taken place. However, an important legislative change came in January 2020 when it was allowed for workers to strike even though it “impedes community service”, which could previously be classified as a terrorist act. 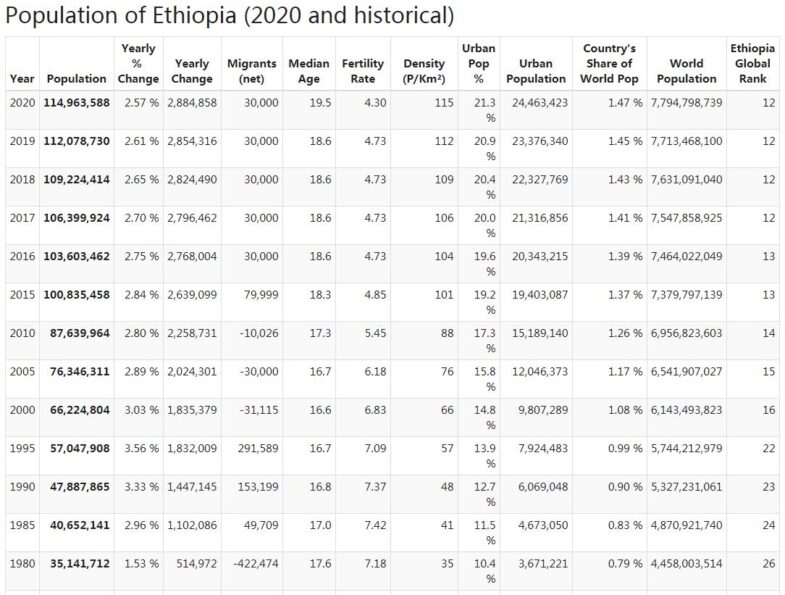 There is a large central organization, the Confederation of Ethiopian Trade Unions (Cetu), which brings together about 500 local unions and nine industry associations. Cetu is considered to be under government control.

In a situation where the peace process between Ethiopia and Eritrea is considered to have stopped, Eritrean President Afwerki makes a two-day visit to Ethiopia and then promises to increase cooperation between neighboring countries. The work to complete the border crossing and to re-open the border crossings has slowed down. The last two leaders met was in July 2019.

Several mosques and a church have been attacked in the Amharic region in the north, reports the Ethiopian etheric media company Fana. Prime Minister Abiy condemns the religious violence he says is perpetrated by extremists who want to destroy the country’s long history of religious tolerance and coexistence. It is not clear exactly when the attacks occurred, what triggered them and who is behind them. It is also unknown if any person was injured. In Amhara, around 80 percent of the population is Christian.

The IMF grants Ethiopia a $ 2.9 billion three-year aid package to help the government implement the planned economic reforms. An initial payment of just over $ 308 million is made immediately. Ethiopia has one of Africa’s fastest-growing economies, but it has a shortage of foreign currency and needs to restructure a number of state-owned companies and make the financial sector more stable. So far, growth has been driven primarily by public investment, but now the country also needs to attract capital from outside.

Abiy shortens the visit to Oslo

Prime Minister Abiy receives the Nobel Peace Prize in Oslo. Because of the turmoil in his home country, he shortens his stay and celebration in Norway, and he does not meet the press. In his speech, Abiy Eritrea’s President calls Afwerki “partner and peacemaker”.

Three of the ruling party alliance EPRDF’s four main groups – the Amharic group, the Oromos and the so-called Southern Ethiopian people – come together to form a single political party, called the Prosperity Party. The most influential group, the Tigrean People’s Liberation Front (TPLF), boycott the vote and thus stand outside. Prime Minister Abiy says that the merger will strengthen the governing alliance ahead of the upcoming 2020 election.

Sidama votes for his own state

As many as 98 percent of the residents of the Sidama region of southern Ethiopia vote to form their own state through an outbreak of the state of Southern Nations, Nationalities, and Peoples’ Region. Sidama is a majority people in the south and has long wanted to have its own state, with control over taxes, schools, police, care and other community services. Prime Minister Abiy, whose reform policy brought the issue to life, congratulates the sides for a “peaceful and democratic” referendum. However, analysts fear that the outbreak of the sides may lead to other ethnic groups also wanting their own state and that the ethnic unrest in the country may thus increase further. Ethiopia today has nine states. The sides will be the tenth. However, the process of forming a new state is expected to be a lengthy process.

Over 80 deaths in outbreak of violence in Oromia

Eighty-six people are killed over three days starting on October 23 in violent contradictions in Addis Ababa and the state of Oromia. The triggering factor is a conflict within the Oromo people. It is the supporters of Jawar Muhammed (oromies, media entrepreneur and former associate of Abiy) who walk the streets in Abiy-critical protests. Jawar criticizes the Prime Minister for “increasing authoritarian rule” and accuses the government of trying to physically attack Jawar. Hundreds of people are arrested by police during and after the rattles. According to a government source, the “unnamed elements” that oppose Abi’s reform policy are behind the rally.

The 2019 Nobel Peace Prize is awarded to Prime Minister Abiy Ahmed for his efforts to “achieve peace and international cooperation”. He receives the award for being the driving force behind the peace agreement with Eritrea 2018 and for the democratic reforms he initiated in his own country. Abiy Ahmed became prime minister in April 2018 and, with his 43 years, is Africa’s youngest head of government.

Parliament adopts a new electoral law, which means, among other things, that a national party must have at least 10,000 members to take part in elections and that a regional party must have at least 4,000 members; Civil servants must “resign temporarily” from their positions if they are to run for election, but they must regain their positions if they lose. Elections to the regional assemblies and the federal parliament are scheduled for May 2020. Prime Minister Abiy has said that the 2020 elections are a milestone in the reform process he initiated in April 2018. So far, the process has involved the release of political prisoners, prohibited movements becoming political parties and that a peace process with Eritrea is ongoing. However, some observers warn against holding elections too early because of the ethnic conflicts that ravaged the country and which caused Ethiopia 2018 to register more internally displaced people than any other country. Others believe that Ethiopia should first implement the planned census before the elections are held.

About 350 million trees are planted in Ethiopia in a single day. The planting is intended as a start on a government initiative to induce each Ethiopian to plant at least 40 trees each. Thus, the country would receive 4 billion new trees during the summer. The proportion of wooded land in the country has decreased from 35 percent in the early 1900s to 4 percent today. The cause of the forest death is drought, probably exacerbated by climate change. The previous record for the number of trees planted in a single day in a country was held by India with 50 million.

The military takes over responsibility for security in the south

The military and federal police assume responsibility for the security of the country’s southern region, where dozens of people have been killed in violence in recent days. The unrest originated in the majority people’s attempt to create a new, partially self-governing state in the south. The southern region consists of a number of different peoples. According to the constitution, the government is obliged within a year to conduct a referendum on self-government if one of the country’s nine regions so requests. Sidama requested this in July last year. Since no referendum has yet been held, the sides are threatening to unilaterally proclaim a new state. The turmoil arises when the side leaders, after talks with the government of Addis Ababa, choose to wait for the declaration of independence.

Bargain attempts in Amhara are averted

Five political or military leaders are killed in what is described by the Addis Ababa government as a failed coup attempt against the rulers of the Amhara region of northern Ethiopia. Among the dead are Amhara’s governor and a co-worker, as well as Ethiopia’s Army Chief of Staff, who is killed in a contemporary attack in the capital. Amhara security chief Asaminew Tsige is believed to be behind the death. He was released last year after being jailed for a failed coup in 2009. In the pursuit of the perpetrators, General Asamnew Tsige is shot dead. Nearly 250 people are arrested, of which around 60 belong to the Amharas national movement’s regional opposition party. A few weeks later, one of Prime Minister Abiy’s closest security advisers is appointed new governor of Amhara.

The census is postponed for one year

Parliament postpones the national census for another year. It should have been implemented as early as 2017. The reason is the large refugee flows in the country as a result of ethnic and political unrest. The census is sensitive because it should form the basis for the constituency in the upcoming elections and the border demarcation between the regions of the country (see Political system).

A militia group from the Amhara region has largely destroyed two villages in the neighboring Benishangul-Gumuz region, according to a government spokesman. Around 80 people have been treated for injuries caused by the militia’s attack. Soldiers have been deployed in both regions, where violence between ethnic groups has escalated in recent weeks.

About 1,700 former ONLF soldiers are formally reintegrated at a ceremony in the city of Jijiga in eastern Ethiopia. They can choose between returning to civilian life or being integrated into the federal army or a regional force. The ONLF soldiers stayed in Eritrea until November 2018 when they could return home after signing a peace agreement with the government (see November 2018).

Over 13,000 have been granted amnesty

The state prosecutor announces that more than 13,000 people have been granted amnesty in accordance with a law passed in the summer of 2018. The law gives individuals and groups who are either investigated or convicted of treason, armed insurrection or violation of the Constitution the right to apply for impunity (see July 2018).

A new law is enacted that gives Ethiopia nearly one million refugees the right to work, live, educate and obtain a bank account anywhere in the country. Ethiopia is the African country that houses the second most refugees after Uganda.

The government orders the military to deal with the situation in Kellem Wollega in Oromia in the far west of the country. There, an armed faction of the guerrilla group OLF has begun to rob banks, attack and rape residents, and block off roads. OLF returned to Ethiopia in mid-2018 after entering into a peace agreement with the Abiy government, which thus legally declared the group. In December, the OLF accused the government of breaking the peace agreement and parts of the movement returned to arms. Since then, more than 830 OLF members have been arrested. At the same time, violent clashes in eastern Ethiopia are ongoing between Afars and Somalis. The conflict where the main road to the trading port in Djibouti is blocked for a period and serious fuel shortages arise in, among others, Addis Ababa. Ethnic violence flared up after Abiy took office as prime minister on April 14, 2018 and embarked on a comprehensive reform program. The program includes making peace with a number of ethnic guerrilla groups, many of whom have been allowed to return to Ethiopia. About 1.4 million residents have been forced to flee unrest since spring 2018.