Estonia is a small nation with a limited labor market. Almost one million people are of working age. Population decline and emigration have shrunk the workforce for many years, but 2015 reversed development for the first time since Estonia’s independence in 1991.

Two thirds of the workforce is found in the service sector, almost one third of them work in industry and a small proportion are employed in agriculture, forestry and fishing. The manufacturing industry has the most employees, followed by trade and the construction industry.

In 2016, the average monthly salary in Estonia was approximately EUR 1160 (corresponding to just under SEK 11,000). The minimum wage was 430 euros. The gender pay gap is the largest in the EU.

In Tallinn and Tartu, the proportion of registered unemployed low and well-educated staff is lacking in growth industries with high-tech production.

Estonia had almost no unemployment during the Soviet era (1944–1991), but in conjunction with the transition from the planning to the market economy, it grew rapidly and reached about 14 percent in 2000. The worst was the situation in the Narva area in the northeast, where Soviet-built industrial complexes were eliminated. Unemployment then dropped sharply until the financial crisis of 2008-2010, when it reached a record high of almost 20 percent in early 2010.

Subsequently, total unemployment has decreased significantly, but in the Northeast, thousands of people have again become unemployed when oil production from oil shale has decreased due to low prices. Unemployment is also high in rural areas in the southeast. 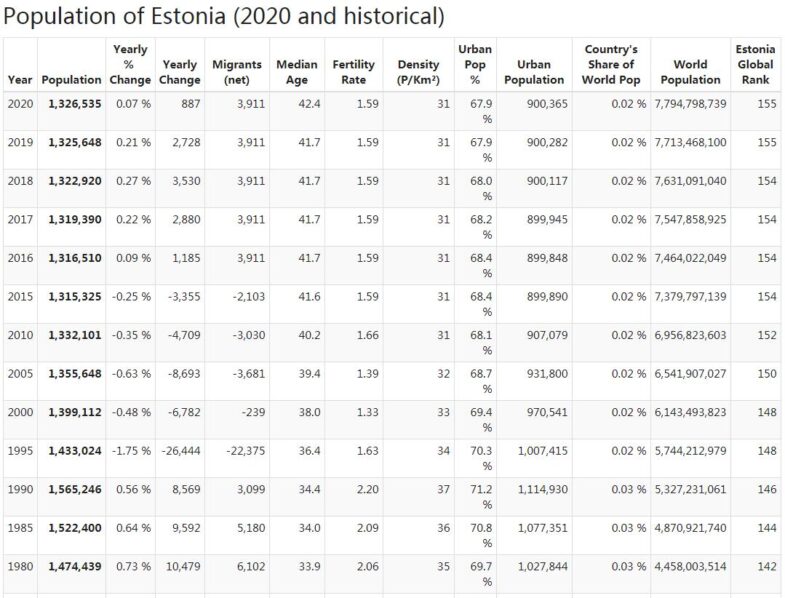 The compensation for the unemployed is low. There is a significant informal sector in the economy, which corresponds to about one-seventh of the country’s gross domestic product (GDP).

Following Estonia’s EU accession in 2004 and later during the financial crisis, many Estonians emigrated to other EU countries in search of jobs. Now several of them have returned, but about 50,000 Estonians reside in Finland, while 10,000’s weekly or monthly commute there. Many of them are construction workers, others are doctors, nurses, cleaners or agricultural workers, who earn several times more in Finland than in Estonia.

Trade union activity dropped drastically after 1991. At independence, almost nine out of ten employees were union members, but now fewer than a tenth are members of a trade union. The largest trade union organization is EAKL, which can be compared with Swedish LO, while Talo organizes among other teachers and cultural workers.

The county should be gone

The Government announces that the country’s counties will be abolished following a merger of municipalities in 2017.

Approves the new government between the Center Party, the Social Democratic SDE and the Liberal IRL under the leadership of the Center Party’s Jüri Ratas; Six of the ministers were part of the previous government. For the first time, the independent Estonia receives three ministers who have Russian as their mother tongue. New Foreign Minister is Center Party Sven Mikser and new Minister of Defense is IRL leader Markus Tsahkna.

Ratas will form a government

President Kaljulaid gives the Center Party new leader Jüri Ratas the task of forming a government. He has two weeks to wear, but plans to finish sooner than that. The Center Party, the Social Democrats and Conservative IRL have recently begun negotiations to form a tripartite government. The parties agree to take five ministerial posts each. They also agree that their main objective is to accelerate economic growth, and that this means, among other things, that they do not intend to support the EU’s plan for a quoted refugee reception.

Declaration of mistrust against Rõivas

As expected, Prime Minister Rõiva loses the vote of no confidence in Parliament. With 63 votes to 28, he is declared deposed. President Kaljulaid calls the six party leaders for deliberations on who can form a new government.

The government is shattered

Social Democratic SDE and Conservative IRL interrupt government cooperation with the Reform Party and point to disagreement on a wide range of issues. Both parties say they would rather try to form a new government together with the Center Party, whose newly elected leader Jüri Ratas is seen as a more suitable partner than the party’s former leader Savisaar, who is considered too Russia-friendly. When Prime Minister Rõiva refuses to resign, he faces a declaration of mistrust.

Center Party leader Edgar Savisaar resigns after disagreements within the party. He is succeeded by 38-year-old Jüri Ratas, who was previously mayor of Tallinn and since 2007, the widely-elected Speaker of Parliament.

The new president is installed

Kersti Kaljulaid will be installed as president at a ceremony on October 10. She says, when she assumes the mainly ceremonial office, that the country’s most important issue is always security. “Many processes that, to put it mildly, cause us concern are ongoing in our immediate neighborhood.”

After a majority of the members of Parliament have agreed to support a new, partisan candidate, Kersti Kaljulaid can be elected president. She gets 81 votes and only needed 68 to get elected. 17 members cast their votes and three are absent. Kaljulaid becomes Estonia’s first female president. She is 46 and has worked until the last few days since 2004 at the European Court of Auditors in Luxembourg. (3/10)

Nor does the special electoral college succeed in voting for a new president. The two female candidates, former Foreign Minister Marina Kaljurand and the Center Party’s Mailis Reps, are both knocked out with barely a margin in the first round. But despite the election in the second round only standing between Siim Kallas and Allar Jõks, supported by the IRL (see Political system), none of them get the simple majority of 168 votes needed to be elected. The reason is that 57 members of the college vote blank and three votes are void. Kallas gets 138 votes and Jõks 134. Now the decision goes back to Parliament and possibly with new candidates. Both Kallas and Joks say they jump off. Next time, two-thirds of Parliament’s 101 votes are again required. That election happens on October 3. (24/9)

No candidate gets a sufficient majority

Nor does the second or third round of elections give any new president. In the third attempt, the battle is between Siim Kallas and the Center Party’s Mailis Reps. Kallas has always received the most votes, but never enough. The decisive election is now taking place on September 24, in a special electoral college with 347 members consisting of parliamentary members and representatives of the municipalities. Then a simple majority is enough to get elected. (30/8)

In a first attempt by Parliament to elect a new president after Toomas Hendrik Ilves, who resigns in October, none of the five candidates gets the two-thirds majority of the votes required. No figures are revealed after the secret ballot. Prior favorite is the Reform Party candidate Siim Kallas.

NATO soldiers to the Baltic

NATO decides to station a battalion of up to 1,000 soldiers in each of the three Baltic countries Estonia, Latvia and Lithuania. The soldiers will mainly come from the UK, Germany and Canada and serve in the three countries according to a rotating schedule.

The Ministry of Defense states that Russian military plan regularly violates Estonian airspace. According to Defense Minister Hannes Hanso, the Russian planes fly with suspended transponders to provoke the Estonians and the Minister warns that an accident could happen at any time.